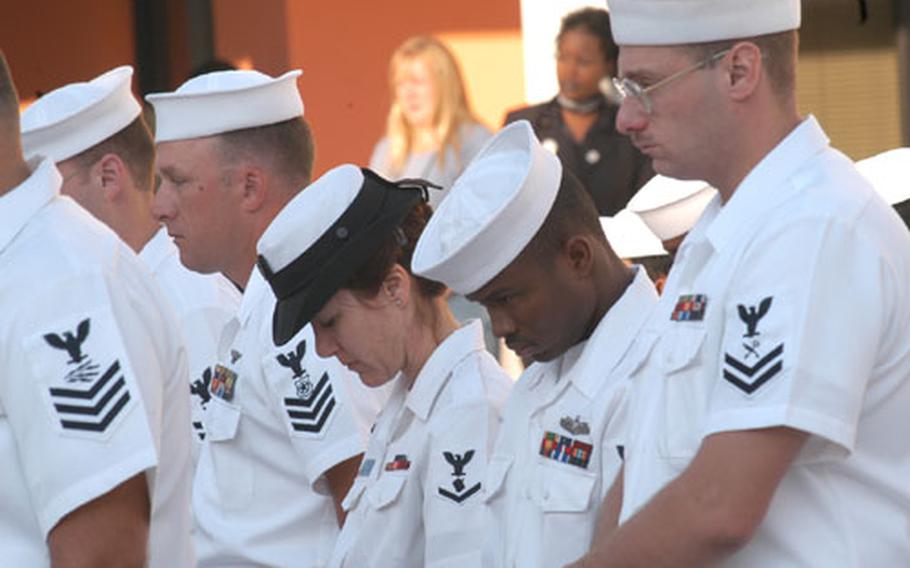 Sailors bow their heads during a moment of silence during a memorial observance Thursday at Capodichino in Naples, Italy. (Kendra Helmer / S&S)

Sailors bow their heads during a moment of silence during a memorial observance Thursday at Capodichino in Naples, Italy. (Kendra Helmer / S&S) 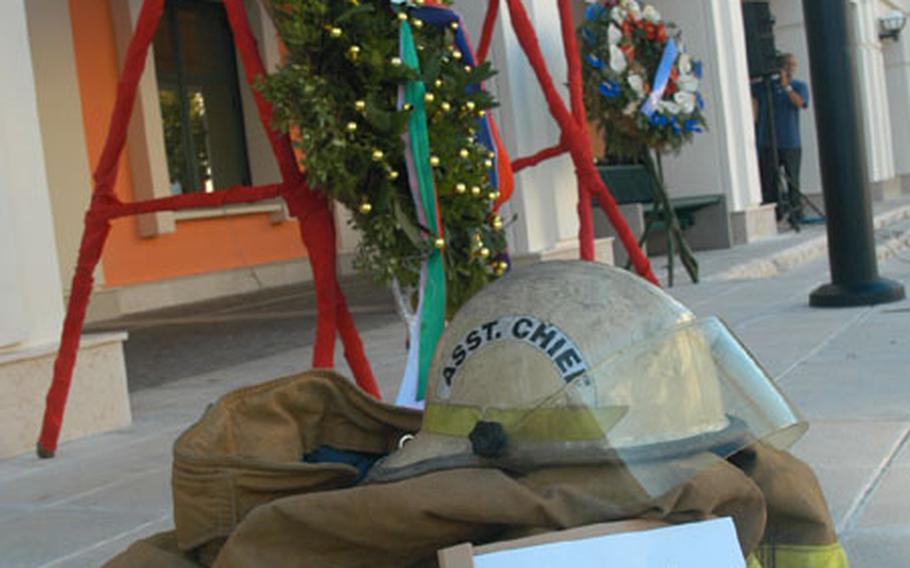 A firefighter’s uniform and booklet listing the names of firefighters killed in the terrorist attacks on Sept. 11, 2001, rest below the American flag during a memorial observance at Capodichino in Naples, Italy. (Kendra Helmer / S&S) 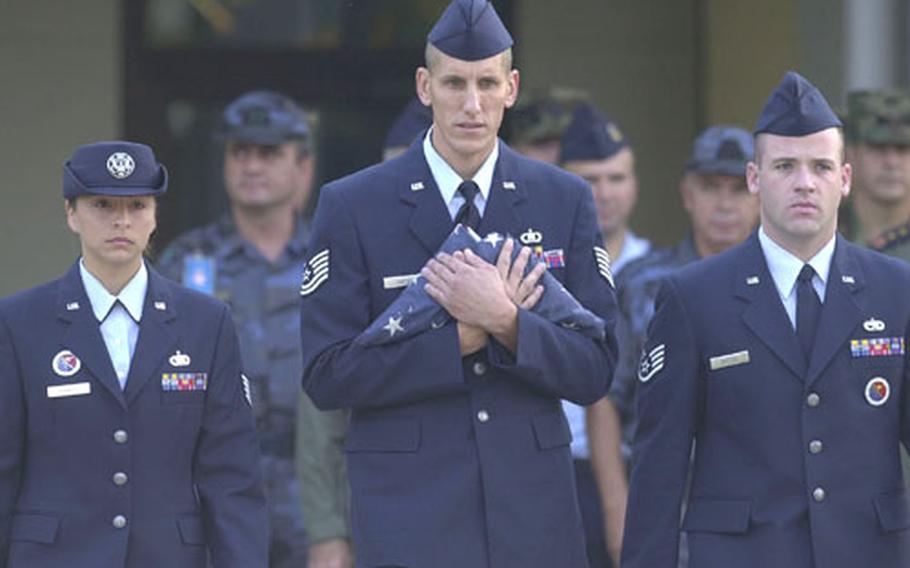 At RAF Lakenheath, England, a short and nearly silent ceremony marked the two-year anniversary Thursday of horrific terrorist attacks on America on Sept. 11, 2001.

In Afghanistan, the first front for the war on terror, a short ceremony was held, but no one needed reminding about why they are far from home.

The commander of the 8,500 U.S. troops now in Afghanistan, where the first blows in the war on terror were struck only weeks after the tragic attacks, spoke to about 400 international troops at Bagram air base.

&#8220;It is important and vital that you are here,&#8221; said Lt. Gen. John Vines, commander of Joint Coalition Task Force 180. &#8220;It is rare when citizens of any nation have the opportunity to make a difference. You have that opportunity. Because you have the courage and conviction to prevent evil, it is an honor to serve with you.&#8221;

In England, the ceremony lasted barely three minutes. A few hundred people, including many young students, met at Peacekeeper Park. At the moment of the attack on the Pentagon two years ago, a voice from the command post asked people across the base, home of the 48th Fighter Wing, to become silent.

At the park, Brig. Gen. Mark T. Matthews, wing commander, and Squadron Leader Mike Turner, the base&#8217;s RAF commander, placed a wreath in honor of terror&#8217;s victims. When F-15s from the wing flew overhead in the missing-man formation, the ceremony came to an end.

Matthews asked people to take a moment to remember those who have died in the war.

Afterward, Matthews talked about his experience two years ago. He was in the Pentagon as assistant deputy director for global operations for the Joint Chiefs. When the airplane struck the building, he was on the opposite side, in the Air Force office area.

He and others were ushered to the national military command center to monitor events.

He had planned to run later that day, but spent 48 hours in the center as officials determined if more planes were involved or more attacks were imminent.

The smell of smoke is also clear in his mind. The wood from the building&#8217;s old frame burned. So did the wiring. Both gave off a definitive odor.

Matthews said his stint at RAF Lakenheath, which began this summer, is exciting for him.

The war on terror, he said, has also spawned &#8220;a stronger sense of jointness&#8221; in the U.S. military. The Army, Air Force, Navy and Marines are now focused together on one goal with no thoughts about the differences between the services.

Also in England, a ceremony at Alconbury High School at RAF Alconbury included a poem by senior Jan Acoba, president of the Student Council. The school color guard raised the flag to half-staff and a detail of Air Force Junior ROTC cadets placed flowers at the flagpole&#8217;s base.

Tom Smith, the school principal, spoke to the students and explained the significance of the day&#8217;s anniversary.

In Afghanistan, the ceremony included audio clips from the news in the hours following the attack.

Sgt. Shirley Parks, also from Company D, said after the ceremony, &#8220;The anniversary has new meaning to me now, being directly involved in it here.&#8221;