Some of the 163 airmen who arrived at Kunsan Air Base in South Korea Thursday are greeted as they step off the chartered Patriot Express. They&#39;re starting a one-year tour with Kunsan&#39;s 8th Fighter Wing. (Franklin Fisher / S&S)

Some of the 163 airmen who arrived at Kunsan Air Base in South Korea Thursday are greeted as they step off the chartered Patriot Express. They&#39;re starting a one-year tour with Kunsan&#39;s 8th Fighter Wing. (Franklin Fisher / S&S) 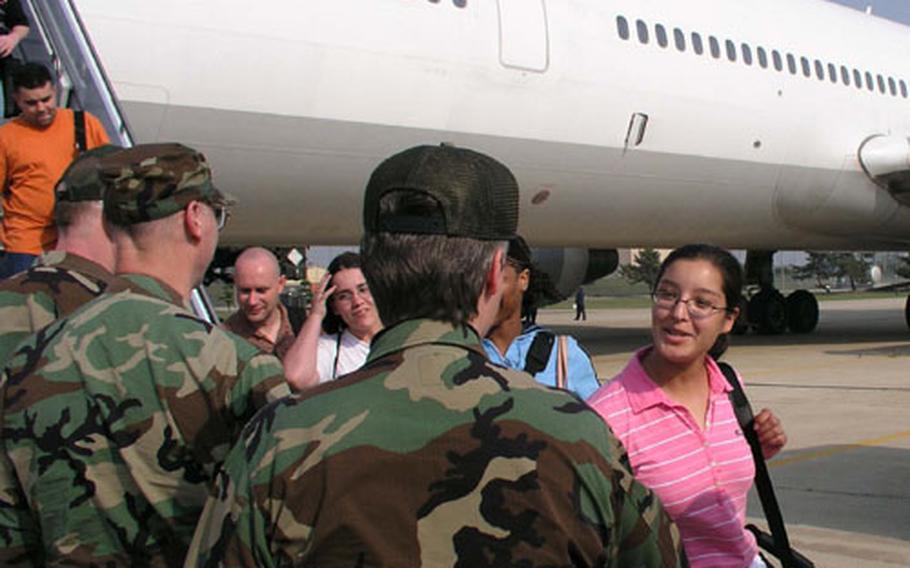 At Kunsan Air Base in South Korea, Col. William Coutts, vice commander of 8th Fighter Wing, extends hand to welcome one of the 163 airmen who arrived aboard a Patriot Express flight Thursday to start a one-year tour with the wing, known as The Wolf Pack. (Franklin Fisher / S&S) 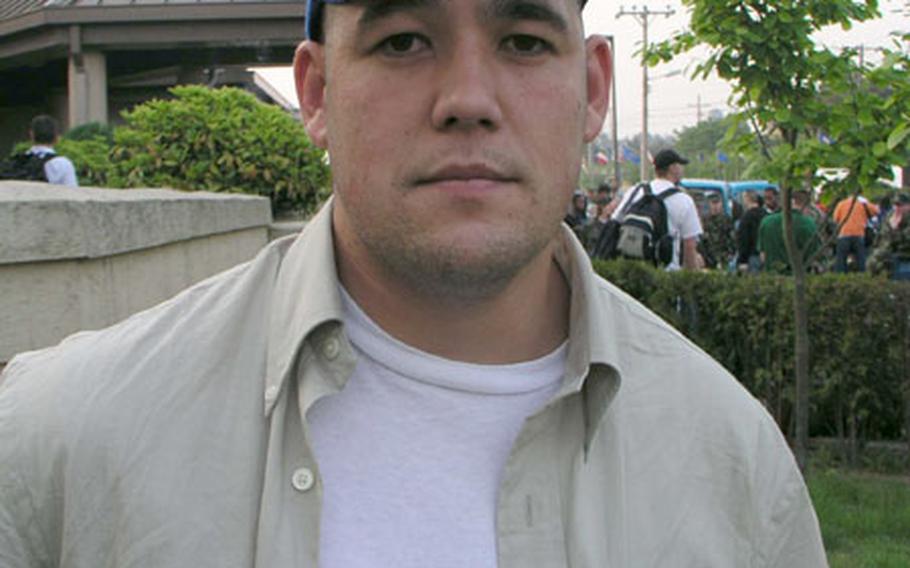 Lewis was setting foot on strange soil &#8212; the 650-acre fighter base at the waters of the West Sea lies 100 miles south of Korea&#8217;s Demilitarized Zone. It&#8217;s home to the wing that proudly calls itself The Wolf Pack, a nickname dating to the Vietnam War.

But Lewis wanted to be home.

As she and the other airmen made their way down the passenger ramp, they saw below a line of 14 Wolf Pack senior officers and senior noncommissioned officers, all in green camouflaged BDU uniforms, smiling a big welcome as pumped-up rock music blared from speakers at the back of a nearby truck.

&#8220;Welcome to the Wolf Pack,&#8221; said the officer at the head of the line, Col. William Coutts, the 8th Fighter Wing&#8217;s vice commander. With the wing commander on leave, Coutts was the first greeter.

As the airmen, mostly in their 20s and 30s and wearing jeans and T-shirts, reached the tarmac, each waiting official shook their hands and welcomed them to the Wolf Pack.

That&#8217;s the idea behind the greeting ceremony, the wing&#8217;s leaders said. The Wolf Pack is proud of its tradition of making sure its new arrivals are given a distinct, deliberate welcome. On those Thursdays when the Patriot brings in another planeload of new arrivals, wing officials make the welcoming ceremony priority business, Coutts said in an interview.

The tradition is a legacy of The Wolf Pack&#8217;s Vietnam War days, when it was the 8th Tactical Fighter Wing based at Ubon Airfield, Thailand, commanded by then-Col. Robin Olds.

&#8220;This is the story,&#8221; said Coutts. Olds and five enlisted men were flown to the airfield where Olds was to begin as wing commander. It was night, said Coutts.

An enlisted man happened by in a jeep; Olds hailed him for a lift.

The driver took them to where they needed to go.

Davis had heard about the Wolf Pack&#8217;s tradition of welcoming the Patriot flight.