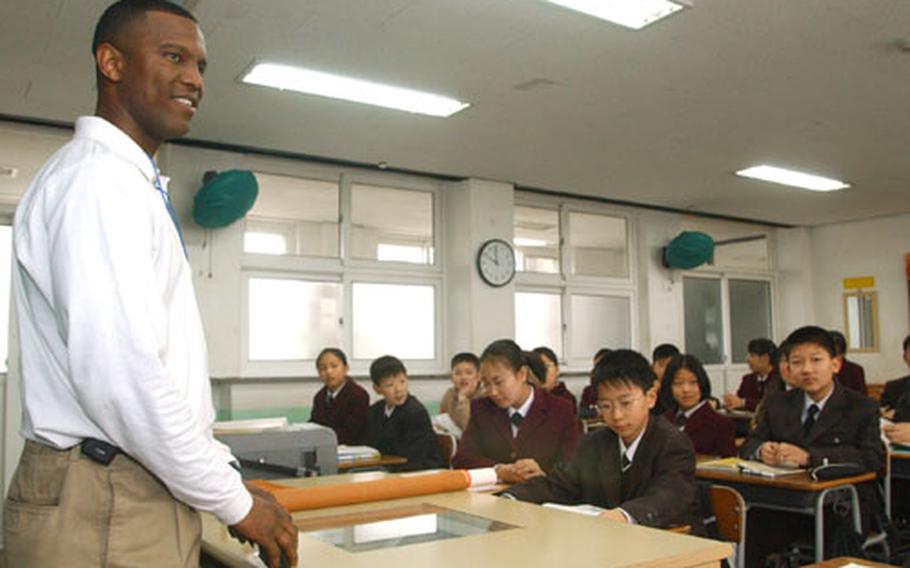 Air Force Tech. Sgt. Gregory Braxton of the 8th Communications Squadron, Kunsan Air Base, South Korea, teaching English recently to 13-year-olds at a local South Korean school. Braxton is one of more than 30 members of Kunsan&#39;s 8th Fighter Wing who volunteer to teach English in area schools on a volunteer basis. (Courtesy of USAF)

At least that&#8217;s what Air Force Tech. Sgt. Gregory Braxton discovered when he recently began teaching on Saturdays as a volunteer at the Nam Middle School in Kunsan, South Korea.

Braxton is among members of Kunsan&#8217;s 8th Fighter Wing who&#8217;ve answered the wing&#8217;s call for volunteers to teach English on Saturdays in some Kunsan schools. The wing began the program after requests from local school officials eager to bring native English speakers into classrooms.

But Braxton, who began teaching last month, discovered almost at once that English or no English, a lot of the 13-year-old boys in his classes were just plain shy. Even with a Korean-speaking teacher on hand to translate, most of the 40 or so kids would not raise their hands to answer, he said. Instead he&#8217;d get blank looks or averted eyes.

So Braxton went shopping at the base exchange and showed up at school the following Saturday morning with him something perhaps more potent than Shakespeare: three bags of sour Blow Pops.

&#8220;To inspire them to participate ... I brought American candy,&#8221; said Braxton, of Baltimore, chief of the communications systems branch at the wing&#8217;s 8th Communications Squadron.

As Braxton ventured a few minutes on the difference between abstract and concrete nouns, he let it be known that &#8220;To participate brings forth reward.&#8221; He even had the Korean teacher translate that.

Then Braxton asked another question.

Airmen, Carlos said, &#8220;get to go out and experience the culture and meet different students and teachers and actually get involved with the local community &#8230; They get to spend two or three Saturdays a month talking to the youth, basically the youth of Korea.&#8221;

Braxton too thinks volunteering to teach English affords airmen a chance at something &#8220;worthwhile&#8221; &#8212; and to help improve the American image among Korean youngsters.