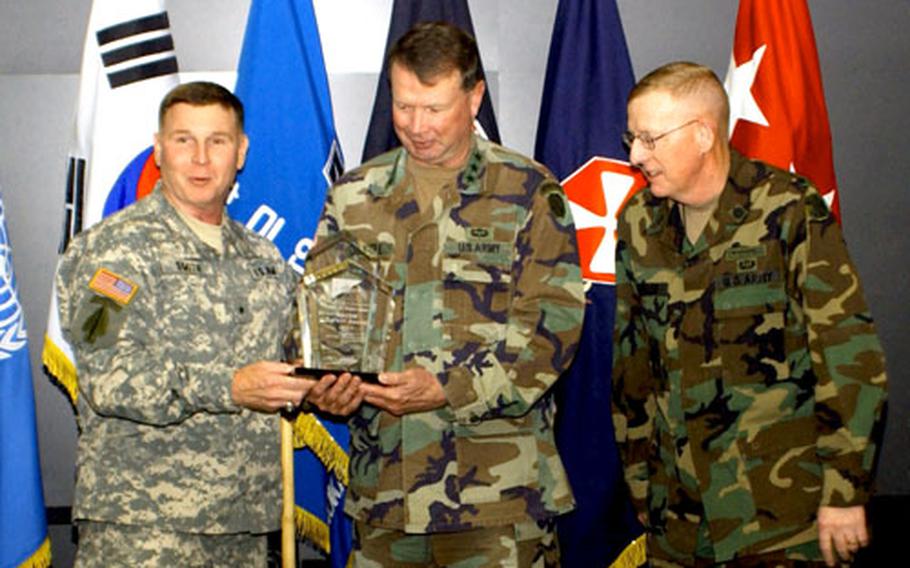 YONGSAN GARRISON, South Korea &#8212; The 8th U.S. Army has received a top Pentagon award for its 2004 safety record, the first time the command has been recognized in at least a decade for improvements in safety, according to U.S. Forces Korea officials.

The Major Command Safety Award was given because of decreases in accident rates and accident costs from 2003 to 2004.

A few months after Campbell took command of 8th Army, he expanded the role of the Safety and Occupational Health Advisory Council, a command-level group that reviews accidents across the peninsula and discusses ways to mitigate future injuries, Owens said.

The drop in aviation accidents &#8212; from four to two &#8212; also meant fewer lives lost and less damage to property, Owens said. In 2004, one of the two aviation accidents involved an unmanned aerial vehicle. In 2003, a C-12 airplane flew into the ground and killed two people, according to USFK statistics.

Five other people died in 2003, including three in vehicle accidents and one in a motorcycle accident. In 2004, the only fatality involved a soldier in an off-duty accident in a privately owned vehicle.

From 2004 to 2005, however, the numbers have crept back up. There have been six aviation accidents, 93 ground accidents, three fatalities and nearly $38 million in damages, according to USFK.

In response, 8th Army is launching a new safety campaign next month, Owens said. Campbell has restructured the safety council, and public service announcements for American Forces Network are set to begin next month.

The 8th U.S. Army recently won Armywide recognition for its improved safety record from 2003 to 2004. Here are the accidents recorded by 8th Army during those two years, plus a more recent number from 2005*.

A recorded accident is any accident where a servicemember loses a day of work, damage is in excess of $2,000, or there are injuries. That accident can include soldiers who are assigned to 8th Army but are home on leave; they can also include off-duty accidents involving civilians in Korea.