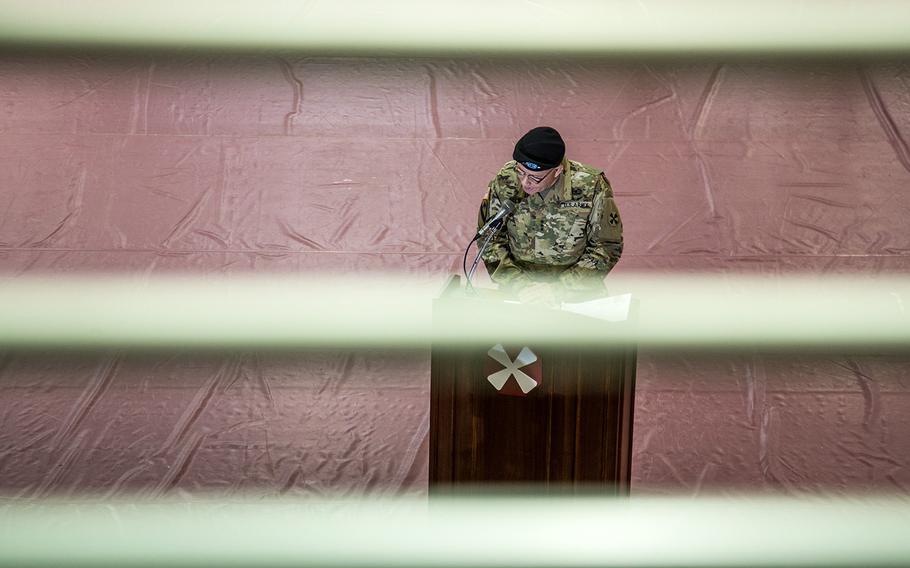 CAMP HUMPHREYS, South Korea — The 8th Army welcomed a new commander to lead its soldiers on the tense Korean Peninsula during a ceremony Friday at its new home south of Seoul. Lt. Gen. Michael Bills accepted the unit’s colors inside Collier Fitness Center at Camp Humphreys saying he would do his best to maintain the Army’s “fight tonight” posture. He replaces Lt. Gen. Thomas Vandal, who is retiring. The highest Army headquarters unit on the peninsula, the field army overseas the 2nd Infantry Division, 19th Expeditionary Sustainment Command and other brigades, including the air-defense brigade. Bills — who previously served as U.S. Forces Korea’s assistant chief of staff of operations — will be charged with overseeing the final touches of a $10.7 billion expansion at Humphreys, which will eventually replace Yongsan Garrison in Seoul as the main U.S. military base in South Korea. The expansion had been frequently postponed since Washington and Seoul agreed in 2004 to move U.S. forces south of the Han River, which runs through the capital. Overseeing transformations is something the New York native has experienced often during his 34 years in the Army. As commander of the 3rd Armored Cavalry Regiment in 2006, Bills led a unit refitting after it moved from Fort Carson, Colo., to Fort Hood, Texas. As Fort Carson’s senior commander from 2013 to 2014, he headed up the transformation of the 4th Infantry Division as it deactivated one armored brigade and transitioned another to a Stryker brigade. During Friday’s ceremony, USFK commander Gen. Vincent Brooks praised Bills’ war record, which began with a deployment to Saudi Arabia during Operation Desert Storm. Vandal said Bills is the right man for the job. “Our combined, multigenerational commitment to the defense of [South Korea] will remain rock steady under [Bills],” he said. “I can personally attest that his experience [with USFK] gives him the in-depth, strategic insight needed to succeed.”

Bills will have to maneuver a dense media landscape as a commander in a geopolitical hotspot that saw North Korea conduct an underground nuclear blast and fire more than 20 ballistic missiles last year.

His dealings with the press have garnered him negative attention in the past. In 2014, while serving as the 1st Cavalry Division’s commander, Bills banned the military editor of a small Texas newspaper from covering the division after a disagreement over wording in a redeployment story. The ban was quickly lifted.

The United States maintains about 28,500 servicemembers in South Korea, which remains technically at war with the North after the Korean War ended in an armistice instead of a peace treaty.