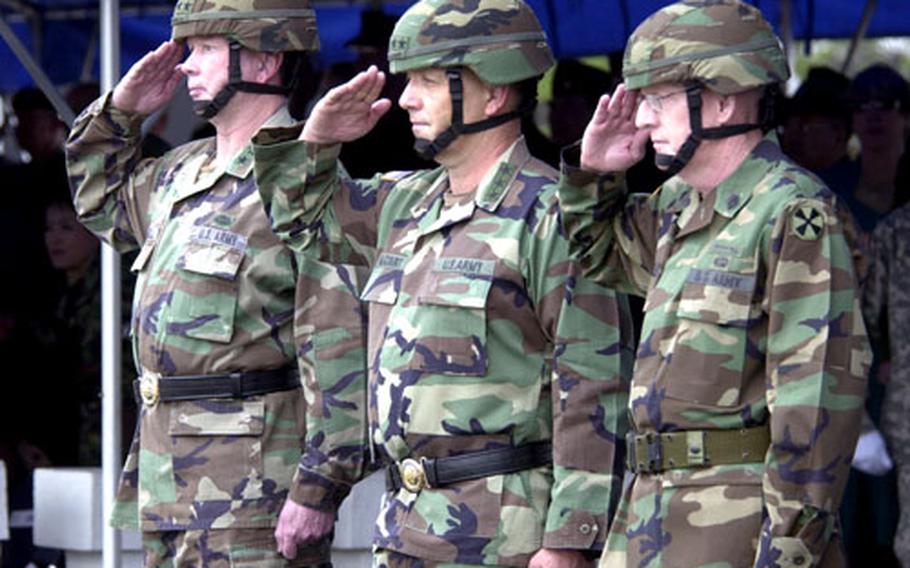 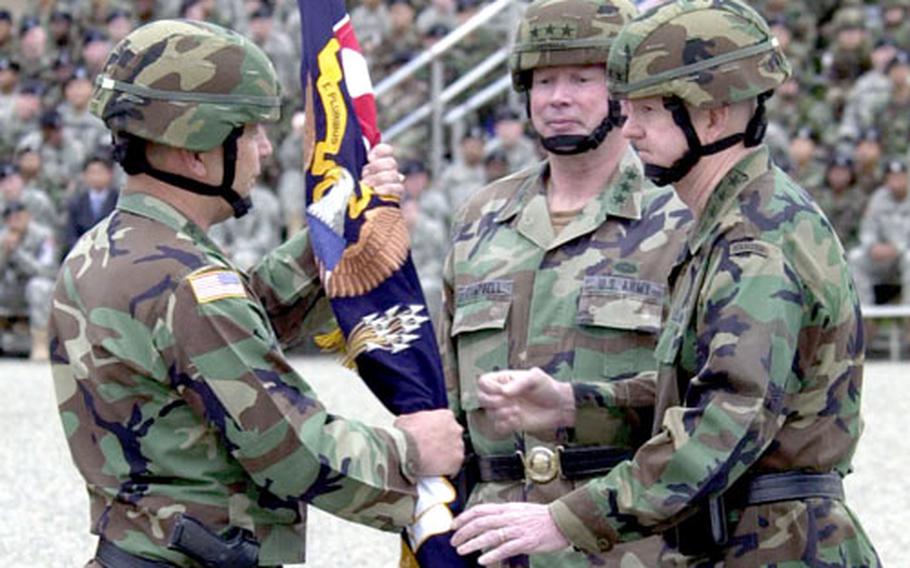 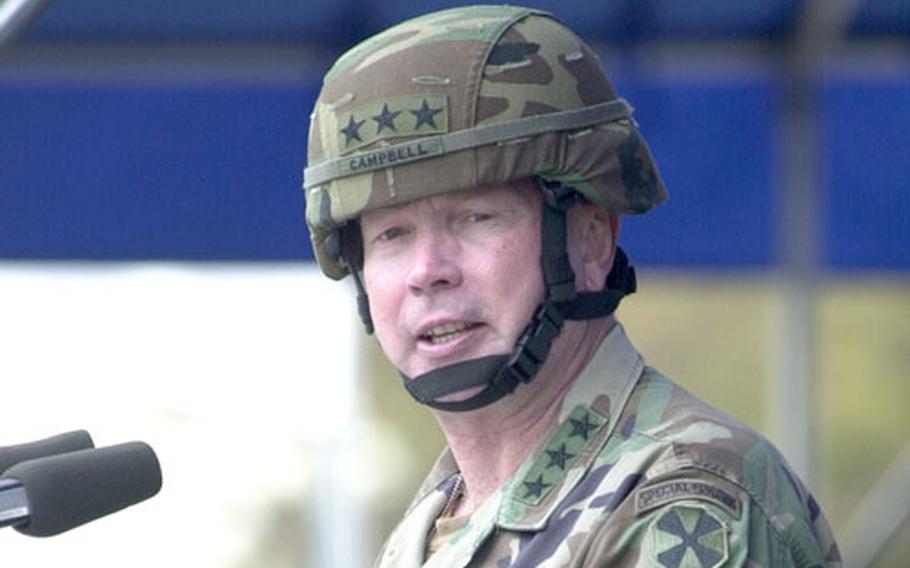 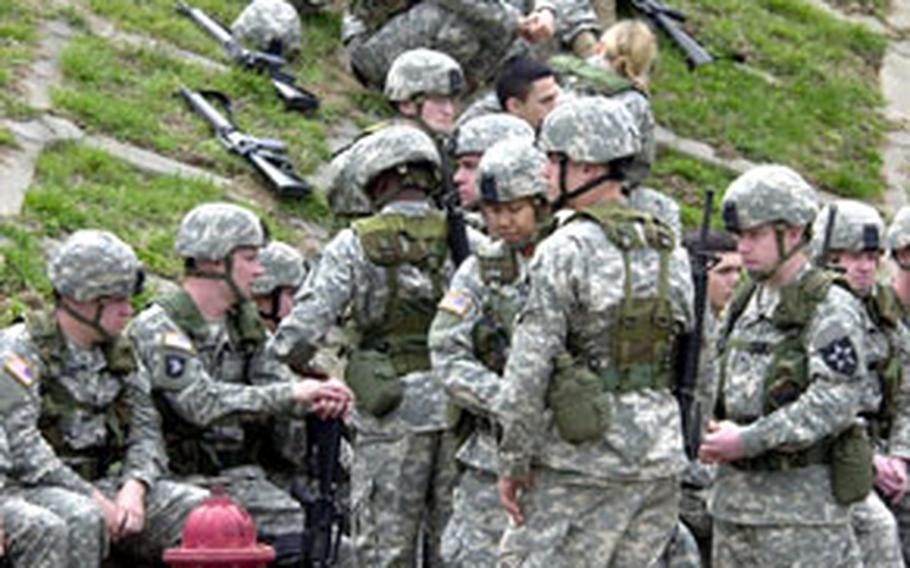 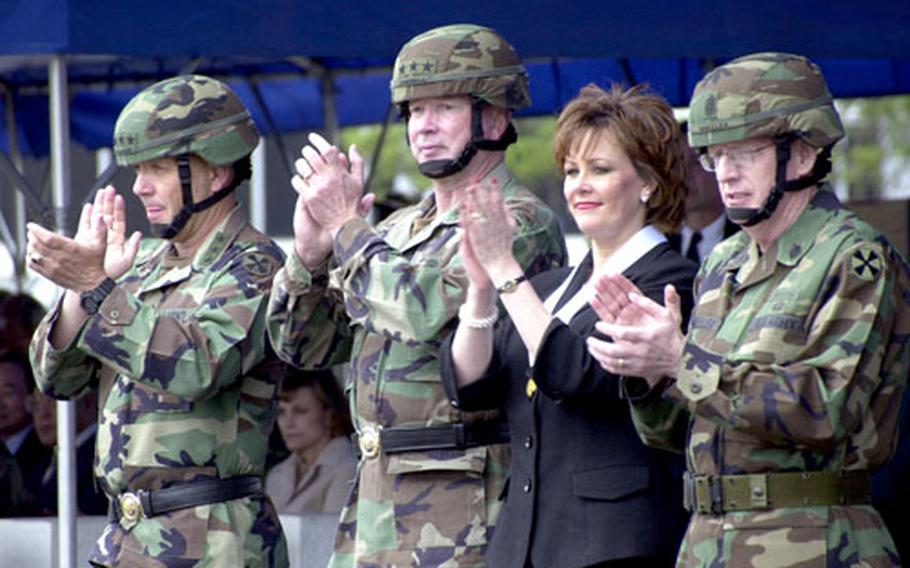 During the ceremony, USFK commander Gen. B.B. Bell passed the unit colors from Campbell to incoming commander Lt. Gen. David P. Valcourt. In the position, Valcourt also serves as the Chief of Staff for U.S. Forces Korea, the United Nations Command and the Combined Forces Command.

Bell thanked the general and his wife, Dianne, for their service in South Korea.

When Campbell took command, &#8220;his seasoning, confidence, inspired leadership, mission focus all fit masterfully in the complex military and political environment on the Korean peninsula,&#8221; Bell said. &#8220;Perhaps the most complex environment since the end of the Korean War hostilities.&#8221;

During turbulent times, &#8220;there were those who thought the Republic of Korea and U.S. alliance was in danger,&#8221; Bell said. Some believed the relationship had run its course and was a by-product of the Cold War, he added.

&#8220;They were all looking for leadership and a path to the future,&#8221; he said. And with Campbell, &#8220;the alliance not only survived, but my sense is, that it has emerged stronger and more resilient then ever.

Bell welcomed Valcourt and his wife, Diane, with a story about how Valcourt was on the links within 18 hours of arriving back in South Korea.

But not only is Valcourt a great golfer, Bell said, he&#8217;s a superb officer with a distinguished career.

&#8220;We welcome the experience and insight this warrior-leader brings to 8th Army, USFK and CFC,&#8221; Bell said. &#8220;And Diane, we also welcome you and thank you for your commitment to the force and to this mission.

Campbell said when he took command 3&#189; years ago, he asked 8th Army soldiers to master their craft, have pride in the colors, obey their orders, be loyal to their leaders and be friends to their comrades.

&#8220;You, and those who have preceded you, did exactly as I asked,&#8221; Campbell said. &#8220;No commander could have been better served. Thank you for your selfless service, for your commitment, your dedication, your confidence and your loyalty.&#8221;

And he joked with the troops as he wrapped up the hourlong ceremony.