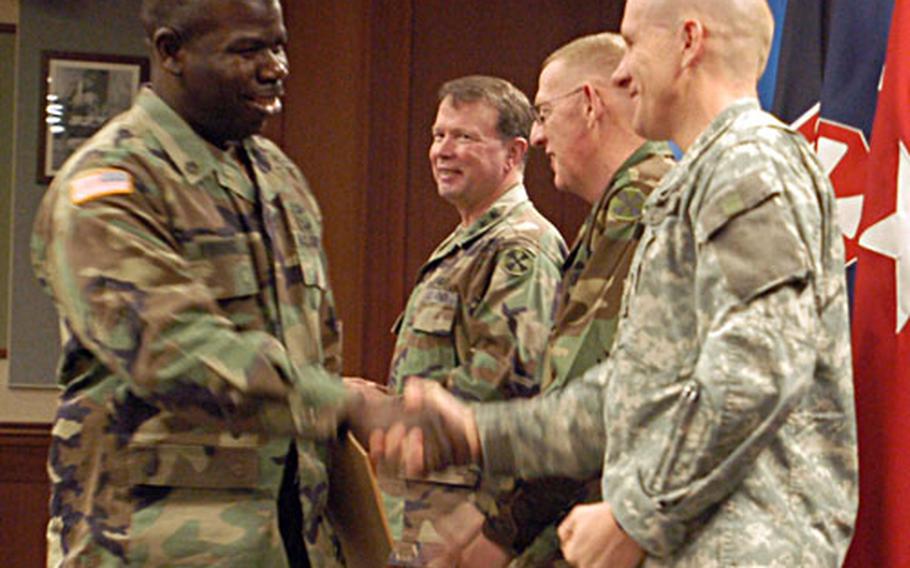 YONGSAN GARRISON, South Korea &#8212; As Lt. Gen. Charles C. Campbell congratulated representatives from 13 8th U.S. Army units Friday for excellence in maintenance and supply, he likened their teamwork to that on another battlefield that captured many people&#8217;s attention last week: the Rose Bowl.

&#8220;When they interviewed Vince Young, he didn&#8217;t talk about that day,&#8221; Campbell said of the Texas quarterback who ran for more than 200 yards and scored three touchdowns against the University of Southern California.

&#8220;He talked about those two-a-days back in August,&#8221; Campbell said, referring to pre-season practices and conditioning sessions that prepared the team.

In the Army, he said, keeping soldiers flying and fighting is the job of maintenance and supply troops.

In maintenance, evaluators judged 17 units, according to Chief Warrant Officer Luis Diaz of the logistics office for 8th Army.

Sgt. 1st Class Tony Griggs of the 121st General Hospital has a staff of 16 soldiers who maintain all the equipment &#8212; including X-ray machines, vehicles and generators &#8212; at the hospital on Yongsan Garrison.

Sgt. 1st Class LaSalle Russell oversees supply for the 8th Military Police Brigade. His staff has to keep track of all equipment &#8212; from guns to dog kennels to police vehicles &#8212; throughout the 32,000 square miles in South Korea.