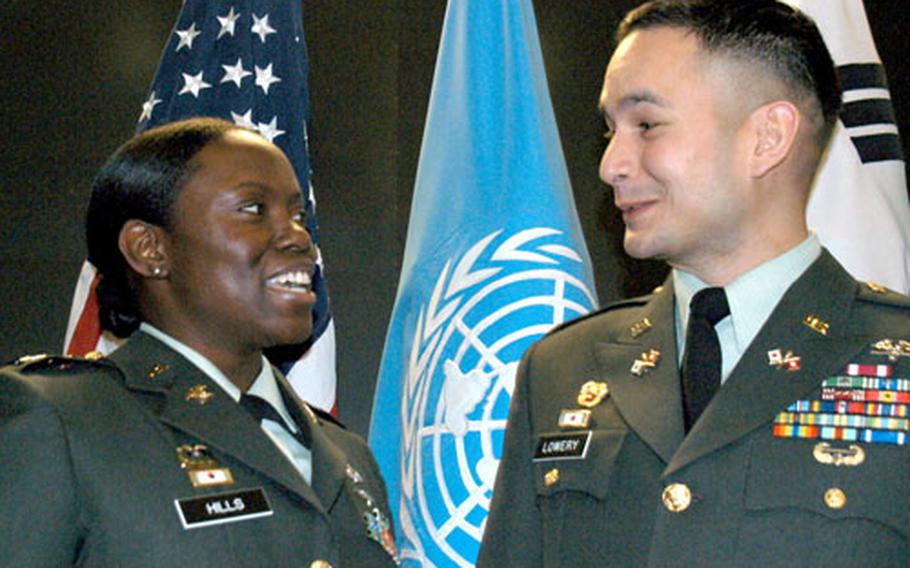 YONGSAN GARRISON, South Korea &#8212; After all the handshakes and congratulations were over, the two 8th Army winners of the Gen. Douglas MacArthur Leadership Award finally were able to congratulate each other.

Both officers were picked by a panel of colonels Friday as the 8th Army representatives for the MacArthur, which recognizes outstanding military performance, leadership and achievement among company-grade and junior warrant officers.

Hills and Lowery were picked from a group of 13 officers, all of whom had been nominated by their commands.

On Friday, they each had individual interviews with 8th Army colonels before the final selections were made.

Hills, 28, of Charleston, S.C., and Lowery, 30, of Crestview, Fla., both are assigned to the 23rd Area Support Group at Camp Humphreys.

Hills joined the Army seven years ago and now coordinates support operations between her unit and the South Korean military.

In her last assignment, she was company commander of the 348th Quartermaster Company at Humphreys, overseeing more than 100 soldiers for 18 months.

Lowery has been in the Army for 12 years, but he&#8217;s in his first assignment as a warrant officer. Now he troubleshoots problems with the information system that manages supplies for the Army in South Korea.

Hills now will compete against 23 other commissioned officers throughout the Army.

Lowery will compete against 15 other warrant officers. The results of the contest are due in May.

Two years ago, Capt. Gilbert F. Deimel was the Armywide winner. At the time, he was assigned to Headquarters and Headquarters Company, 2nd Infantry Division, 8th Army.