8th Army's Campbell: Military doctors, nurses in Korea must be 'ready to fight' 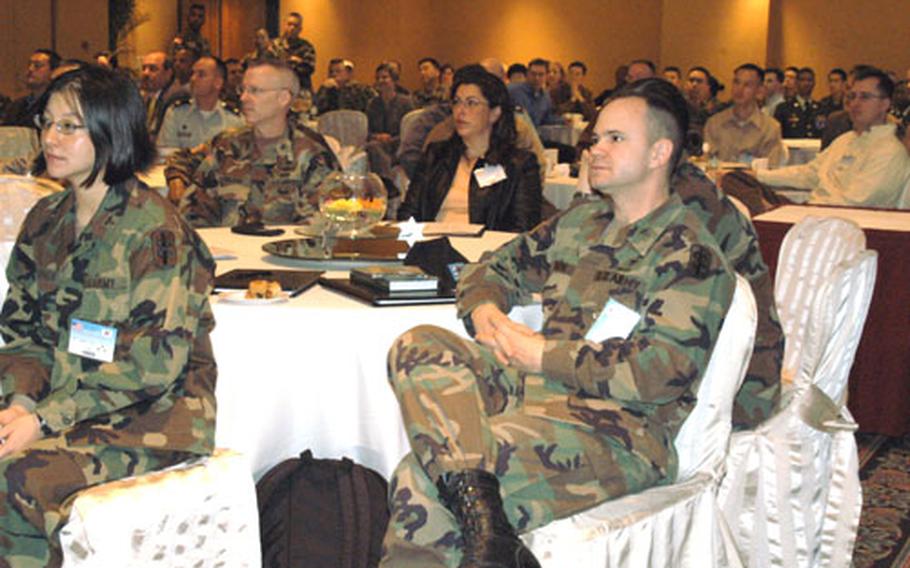 About 100 people met Monday morning on Yongsan Garrison for the start of the 54th annual medical conference of the 38th Parallel Medical and Nursing Societies. The conference is open to all medical personnel in Korea, though it’s geared toward servicemembers. (Teri Weaver / S&S)

About 100 people met Monday morning on Yongsan Garrison for the start of the 54th annual medical conference of the 38th Parallel Medical and Nursing Societies. The conference is open to all medical personnel in Korea, though it’s geared toward servicemembers. (Teri Weaver / S&S) 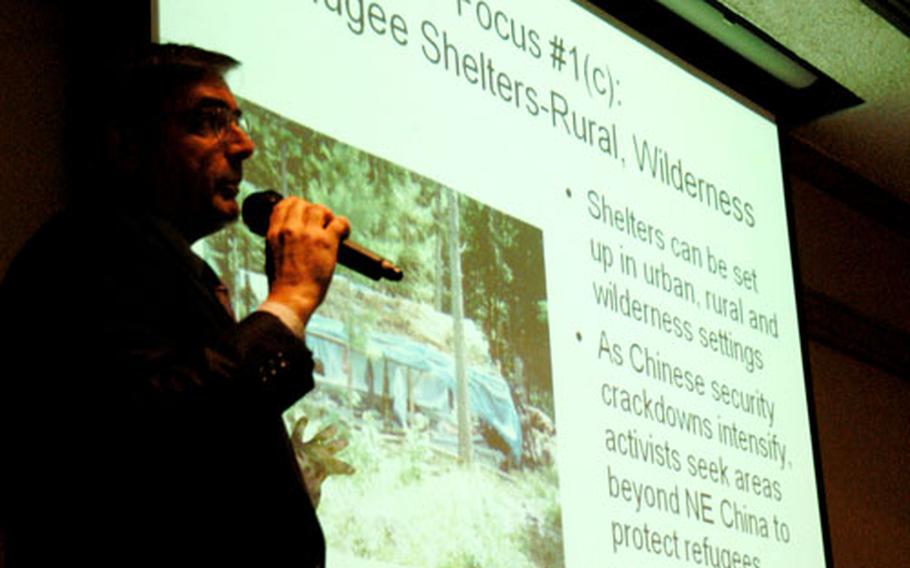 Tim Peters, the founder of Helping Hands Korea, talks Monday morning to a group of military medical professionals during a weeklong conference at Yongsan Garrison, South Korea. Peters discussed poor health conditions among North Koreas and among those who try to escape. (Teri Weaver / S&S)

YONGSAN GARRISON, South Korea &#8212; By the time a North Korean reaches age 7, the child most likely stands about half a foot shorter than were he living south of the 38th Parallel.

Lack of food accounts for the stunted growth, according to Tim Peters, founder of a group in Seoul that helps North Korean citizens and refugees. Almost 40 percent of people assigned to labor camps in North Korea die from exhaustion, he said.

And it&#8217;s common for young boys to develop liver problems, he said, because they drink large quantities of liquor in the winter in hopes of feeling warm.

&#8220;Just getting across the river is not the hardest obstacle&#8221; for North Korean refugees, Peters told a group of about 100 medical professionals gathered at Yongsan to learn about the latest developments in military medicine.

The 54th annual conference for the 38th Parallel Medical Society kicked off Monday with an overview of the Pentagon&#8217;s plans for the U.S. military&#8217;s health services as well as a primer into Asian medical practices.

While the group heard about North Koreans&#8217; dire living conditions, they also heard about the challenges of being a health provider as part of a military tasked with being prepared to respond to any challenge from North Korea.

&#8220;Our medical professionals must be like everyone else on this peninsula: Ready to fight tonight,&#8221; he said, adding that U.S. forces would fight only in reaction to an assault from the North. &#8220;You&#8217;ve got to be trauma experts. You must be able to treat soldiers in chemical and, possibly, nuclear environments.&#8221;

At the same time, Campbell said, health professionals here must provide care for everyday needs of soldiers and their families, from softball wounds to surgeries.

&#8220;We expect the surgeon who is performing a routine appendectomy today in the 121st General Hospital to be able to save the life of a soldier with multiple gunshot wounds in a (battlefield) operating room at night, in the cold, in the rain, on tomorrow&#8217;s battlefield,&#8221; said Campbell, whose father was a military doctor and whose mother was a military nurse in World War II.