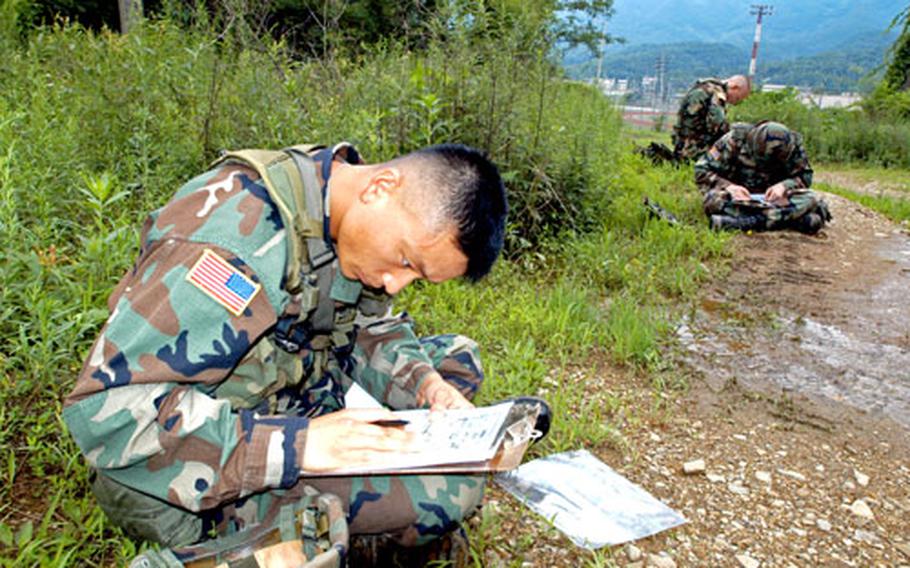 CAMP CASEY, South Korea &#8212; In the nine months since Pfc. Robert Wallace, 22, arrived in South Korea, he&#8217;s proven himself among the Army&#8217;s most outstanding young soldiers.

But even if Wallace wins this week&#8217;s 8th Army Soldier of the Year competition at Camp Casey, he expects to spend the next three years pumping gas.

The Kentwood, La., native calls himself a &#8220;recruiter&#8217;s special.&#8221; When he joined the Army in 2004 he was enlisted as a fueler because that was what the Army needed then, he said Tuesday, during a break from the land navigation section of the contest.

But Wallace, with the 46th Transportation Company at Camp Stanley, dreams of joining the infantry.

The candidates conform to no particular character type, she said, but &#8220;it takes a hard individual to get to that level and meet that standard of competition.&#8221;

Sgt. Jason Lewis, 32, of Fort Scott, Kan., is overseeing the contest&#8217;s land navigation portion. Lewis, of Company A, 2nd Battalion, 9th Infantry Regiment, said the land in which candidates showcase their orienteering skills is some of the toughest terrain he&#8217;s seen.

Next to Camp Casey, it includes steep overgrown hillsides, treacherous muddy tracks and dozens of beehives. A few years ago a soldier fell to his death over a cliff during night land navigation training there. Today a tall fence guards that area, Lewis said.

For Tuesday&#8217;s test, the soldiers were issued a compass, protractor, map and global positioning system. They had to use the tools to find five markers hidden in the training area but could use the GPS just once, he said.

Candidate Sgt. Kim Woo-jin, 33, of Company C, 168th Medical Battalion said he preferred being tested on common tasks that he had more time to practice. &#8220;This map is just two-dimensional,&#8221; he said, holding up a training area map covered in contour lines to indicate steep hillsides.