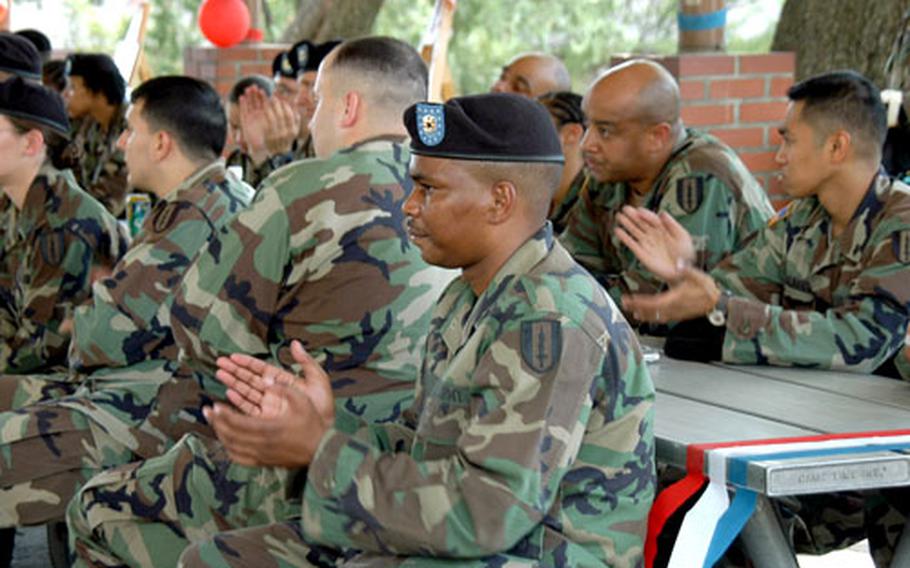 Soldiers from the 41st Battalion of the 1st Signal Brigade listen to the brigade’s senior retention officer at a barbecue picnic Thursday afternoon. (Teri Weaver / S&S)

YONGSAN GARRISON, South Korea &#8212; Lt. Col. Kevin Foster knows many of the almost 700 soldiers in his battalion will learn highly technical and needed computer skills while in the Army.

He also knows many of these soldiers get private-sector offers with starting salaries the military just can&#8217;t beat.

But Foster and some of his officers and enlisted soldiers hope that&#8217;s not the case. For the past seven months, the 41st has been holding retention breakfasts for soldiers undecided about their future with the service. Thursday was the battalion&#8217;s first barbecue, with a short speech about staying in the Army.

It appears to be working.

Overall, retention rates among 1st Signal Brigade soldiers and other units serving with 8th U.S. Army in South Korea are exceeding goals. In 2004, 1st Signal met 113 percent of its retention-rate goal. This year it is on track to surpass its target, said Sgt. 1st Class Richard Carey, the brigade&#8217;s senior career counselor.

The military offers benefits such as free health care, tuition and training and the opportunity to travel, he said.

Bonuses also are available, especially for in-demand jobs, Carey said. They vary based on soldiers&#8217; jobs, experience and rank but some can be tens of thousands of dollars, he said.

Sgt. Terrance Dorsey, 22, of Hemingway, S.C., said he&#8217;s decided to stay until 2010 to get some of that free training. Now in telecommunications, he wants to move to intelligence analysis. If he passes the course for the analysis job, he&#8217;ll get a bonus, he said.

Foster said he understands the concern. He&#8217;s heard from many soldiers who have spent most of the past two or three years away from their families and young children. It is not uncommon for a soldier to deploy to Iraq for a year then face another unaccompanied tour in South Korea with no time at home, he said.

About 30 of the 60 41st Battalion soldiers eligible to reenlist attended Thursday&#8217;s barbecue, where Carey urged them to have plans for the future, regardless of whether those plans include the Army. One plan is not enough, he warned. Even if you have a job waiting, he said, have a backup plan should the opportunity evaporate after moving home.

Sgt. Kerry Bell, 22, of Los Angeles, has only one plan so far. He wants to study computer science and computer engineering at California State University at Fullerton. He&#8217;s planning to apply this fall and will hear in the spring whether he gets in.

He&#8217;s slated to leave the Army, and South Korea, in October. But if he gets into school, the Army will let him leave early so he can begin classes in the fall, he said.