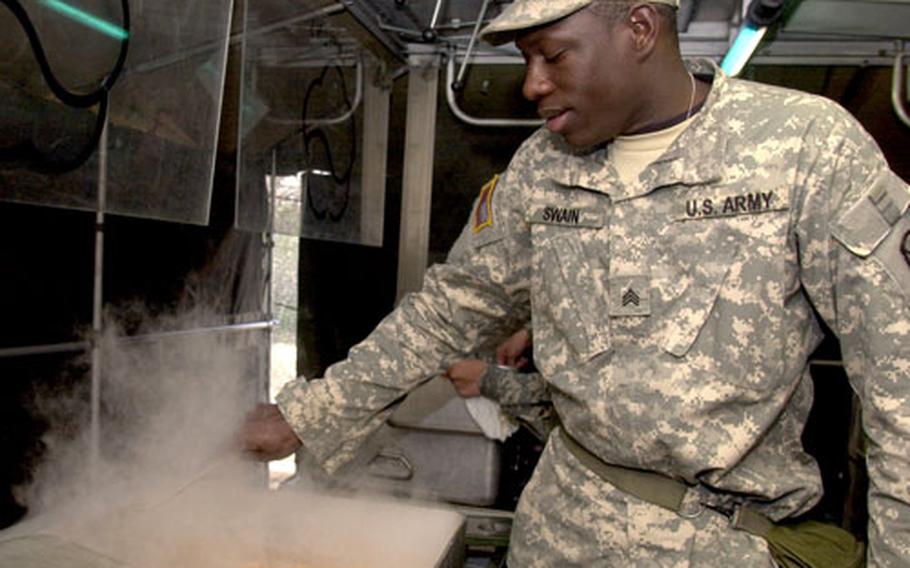 NORTHSTAR RANGE, South Korea &#8212; Living on Meals Ready-to-Eat for months at a time is possible in the field, but few servicemembers would pass up a cooked meal &#8212; especially if it came from an award-winning field prep crew.

Late last week, the 501st Sustainment Brigade staked its claim to the title of best in the Army during evaluations for the Connelly Award field food preparation competition at Northstar Range near Camp Stanley.

Competitors must demonstrate excellence by creating meals under the assumption that a unit has been deployed for months, meaning they must find a way to put a new spin on leftovers and whatever meager supplies are available.

The brigade is being judged on a 1,000 point scale in 10 categories. Taste is just one factor; maintenance, safety, sanitation and many others will determine the winner.

Liggon graded each of the four units with Sandra Holliday, whose International Food Service Executives Association is sponsoring the event.

The 501st is competing against the 62nd Chemical Company at Fort Lewis, Wash.; the 8th Ordnance Company at Fort Bragg, N.C.; and the 603rd Aviation Support Battalion at Fort Stewart, Ga.

Each of the units has already won performance awards, including the 501st&#8217;s win at the 8th Army level.

Thursday&#8217;s competition was made tougher by Area I&#8217;s climate; the unit woke up to find that their hand-washers had frozen up, and some of their water spigots had burst. The unit made it through the ordeal and served breakfast on time, said Chief Warrant Officer Martha Longino.

Then it was on to lunch, which had to be served for both South Korean and U.S. soldiers. The unit whipped up a pork dish made from leftover pork chops, a spicy Korean chicken dish and macaroni and cheese. For dessert, they served Irish creme bread pudding with a raspberry fruit compote.

The young soldiers making the food worked fast and looked confident, but said they also felt the pressure of an Armywide award competition. &#8220;You practice, practice, practice, but you only get one chance to get it right,&#8221; said Pfc. Jared Fentz.

The winning unit will send representatives to Kansas City to accept the Connelly Award.