85,000 cases of water recalled in Afghanistan 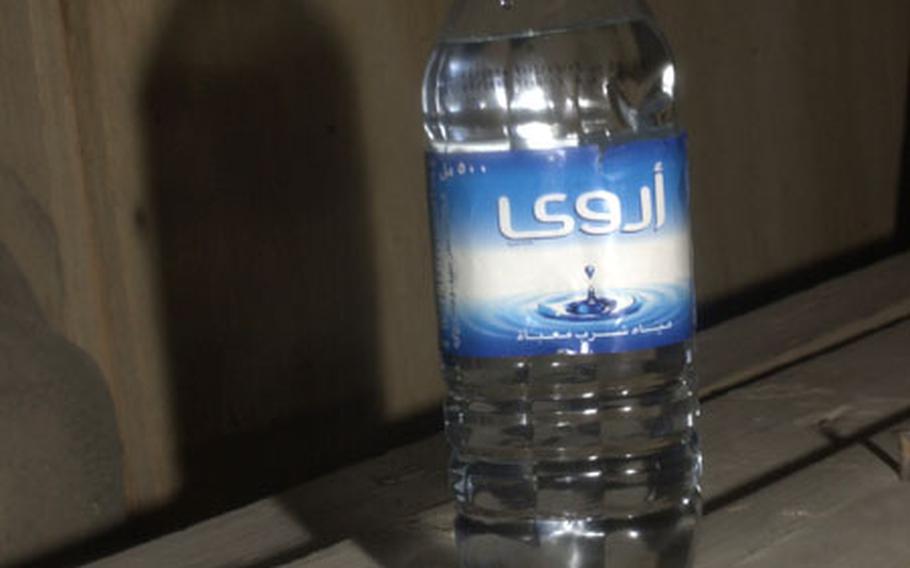 Army officials have recalled 85,000 cases of bottled water in Afghanistan after higher than normal levels of contaminants were detected, according to a message sent to the troops.

The Army&#8217;s message was sent to a Marine contingent at Kandahar Airfield in southern Afghanistan. Top Marine commanders confirmed the recall.

The blue-and-white 500-milliliter bottles are common throughout Kandahar, where daily temperatures soar above 100 degrees.

Army officials in Afghanistan are trying to determine what contaminated the water, which was distributed in the Kandahar region. They downplayed concerns, describing the recall as a &#8220;precautionary measure.&#8221;

&#8220;A recent stock of Arwa water that we tested indicated that it had a level of contaminants that is higher than the accepted standard,&#8221; said Maj. Stacy Bathrick, a spokeswoman for the main U.S. hub at Bagram air base. &#8220;The fact that the Arwa water is being recalled is evidence that our system of testing water works.&#8221;

In a recent random check of the bottled water, the Army found higher-than-normal levels of tritium molecules, Bathrick said in an e-mail response.

According to the U.S. Environmental Protection Agency&#8217;s Web site, tritium is produced naturally in the upper atmosphere when cosmic rays strike air molecules. Tritium also is produced during nuclear weapons explosions or as a by-product in reactors producing electricity.

Bathrick added the water does not pose an &#8220;immediate health risk.&#8221; There have been no reports of soldiers getting sick from drinking the water, she said.

Exposure to tritium increases the risk of developing cancer, according to the EPA site. However, tritium is one of the least dangerous radionuclides because it emits very weak radiation and leaves the body relatively quickly.

&#8220;As a precautionary measure, we have recalled the Arwa bottled water we distributed and are keeping bottles of Arwa water here shelved until we complete analysis of the entire lot of Arwa bottled water.&#8221;

Bathrick declined to elaborate on the contamination. But she did say the Army has no concern that the water may have been tampered with prior to being shipped to the troops.

&#8220;We are aware of a report there was a water sample that tested positive for something. It was all part of a routine and normal testing procedure done on sustenance to ensure the integrity of food chain for our deployed troops,&#8221; said Jack Hooper, spokesman for the Defense Logistics Agency.

The DLA has an approved list of all food and drink suppliers around the world, and commands can only make buys from that list, Hooper said.

Arwa is a product of the Coca-Cola Company and is bottled in Saudi Arabia, Yemen and Bahrain, according to Gurtay Kipcak, public affairs director for the company&#8217;s Middle East and Eurasia division.

More information on tritium can be found on the EPA&#8217;s Web site at: www.epa.gov/radiation/radionuclides/tritium.htm