84 beds that can jump anywhere’ 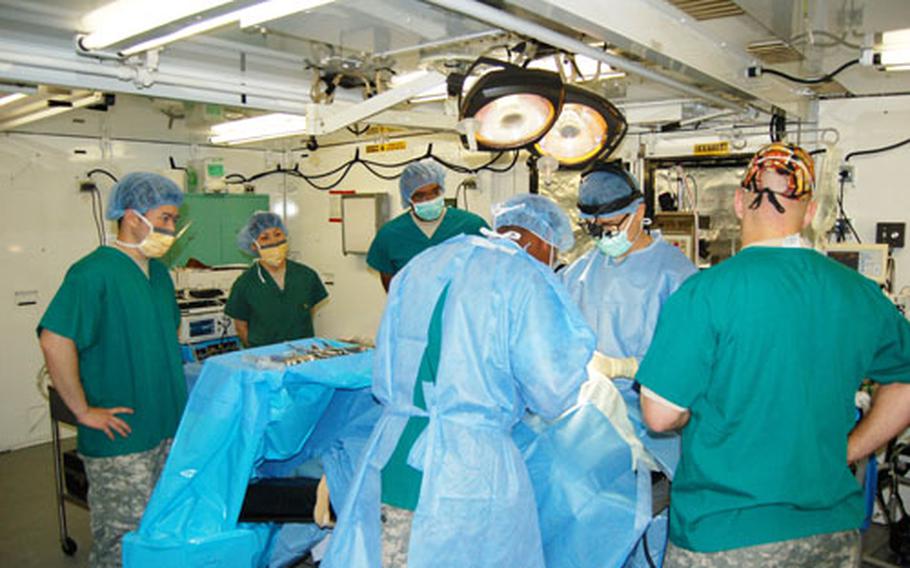 CAMP HUMPHREYS, South Korea &#8212; For many, a complex of tents set alongside an airfield may not seem like the ideal place for surgery or any other medical care.

For some, the idea can be downright frightening.

Pvt. Calee Trevino, who volunteered to have surgery on his wrist at the field hospital at Camp Humphreys, known as 121st Combat Support Hospital South, wasn&#8217;t sure what to expect.

"I thought it might be all raggedy and not well organized," he said. "I was really nervous."

But Trevino found himself pleasantly surprised. "The doctors and nurses here really made me feel comfortable," he said.

Hospital officials declined to name the soldier or give specifics about his medical condition.

The field hospital is the site for a five-day exercise, run in conjunction with, though not a part of Ulchi Freedom Guardian.

The hospital has an operating room, emergency room, pharmacy, a lab and two X-ray machines.

Wrinkle said the mobile hospital could start treating casualties within four to six hours of a contingency.

Within 12 hours it could begin surgeries, he added. And within three days it could become a 248-bed facility.

While set up for training, the facility was being used Monday through Friday for real-world patient care, said Sgt. 1st Class Jeff Brownlee, the hospital&#8217;s chief wardmaster.

In addition to seeing an average of eight to 12 patients daily during the exercise, staff also participate in training such as hospital defense and reacting to explosions on the compound.

"For a lot of us it&#8217;s the first time to set up an actual field hospital," said Sgt. Kyle Davidson, post-op wardmaster. "It gives us a good grasp of what we should be doing."