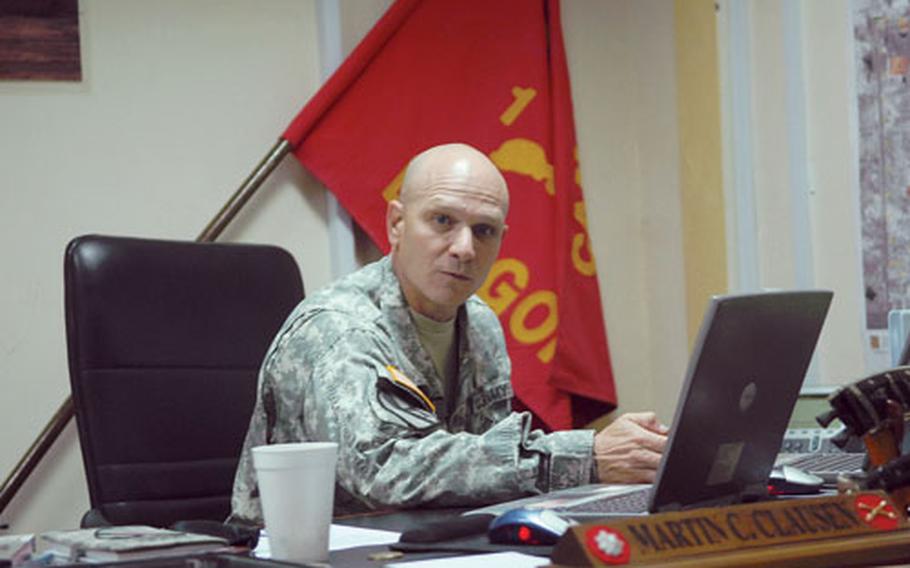 Living two weeks with frequent shelling courtesy of the 1st Battalion, 82nd Field Artillery Regiment had put them in a conciliatory mood. The U.S. soldiers were laying down fire south of the American base in Taji in an attempt to ferret out insurgent mortar teams.

The unit, it would seem, had made its point.

While the counterinsurgency has demanded that more and more artillerymen take up the role of infantry soldiers, this battalion has remained in their traditional jobs.

Though their jobs remain the same, the battlefield has not. The unit has tailored the field artillery mission to keep pace with the evolution of the fight from high-intensity warfare with a definable front to the more complex battle against elusive insurgents and factional violence.

The Fort Hood, Texas-based unit has had over 851 missions during which more than 3,630 rounds have been fired. The battalion has accounted for roughly 50 percent of the rounds fired in the Baghdad/Taji area. &#8220;I would have never guessed that we would fire so many rounds,&#8221; Clausen said.

Unit leaders said the numerous swaths of sparely populated, rural area around Camp Taji have allowed for the large number of missions.

&#8220;Our brigade area of operation north of Baghdad gives us opportunities other units do not have,&#8221; Clausen said.

Besides the typical counter firing missions, the artillery unit has contributed to the security push by targeting locations that had become popular hiding places for roadside bombs. The unit has kept insurgents off balance by firing at times in support of a patrol and sometimes just out to the &#8220;left field,&#8221; as Clausen said.

Either way, the effect was the same. Targeting Americans with roadside bombs had become much more dangerous business, unit leaders said.

&#8220;It would take an awful lot of discipline for a trigger man to sit on a road and pull a trigger with round after round falling around him,&#8221; Clausen said. &#8220;You would have to think really good before going out there and laying wire.&#8221;

Unit leaders said that by targeting the 8 kilometer stretch of road, they contributed to a drop of planted explosives on the crucial artery from 44 in January to roughly 15 a few months later.

&#8220;Firing near IED (improvised explosive device) hotspots allows us to shape where they go,&#8221; said unit Maj. Miles Brown. Soon the few explosives that were found on the roadway were near population centers, which provided insurgents cover from artillery and a convenient hiding place.

Firing near civilians remains the unit&#8217;s biggest challenge in Iraq.

&#8220;We have to achieve a level of accuracy that I have never had to do before,&#8221; Clausen said. Out of the many hundreds of missions the battalion has undertaken since arriving in Iraq in December, three have resulted in the death or injury of civilians. In the spring, a transient family of 10 people were killed when they set up a tent near a targeted area and weren&#39;t spotted. An investigation into the incident did not find the unit at fault.

&#8220;Once you give it a grid,&#8221; said unit member, Lt. Joe Bobbitt of the Excalibur innovation, &#8220;it&#8217;ll go exactly where it needs to go. Excalibur turns the howitzers into a sniper rifle.&#8221; Bobbitt said many soldiers in the unit are pleased to be practicing their chosen fields, which contributes to a high reenlistment rate.