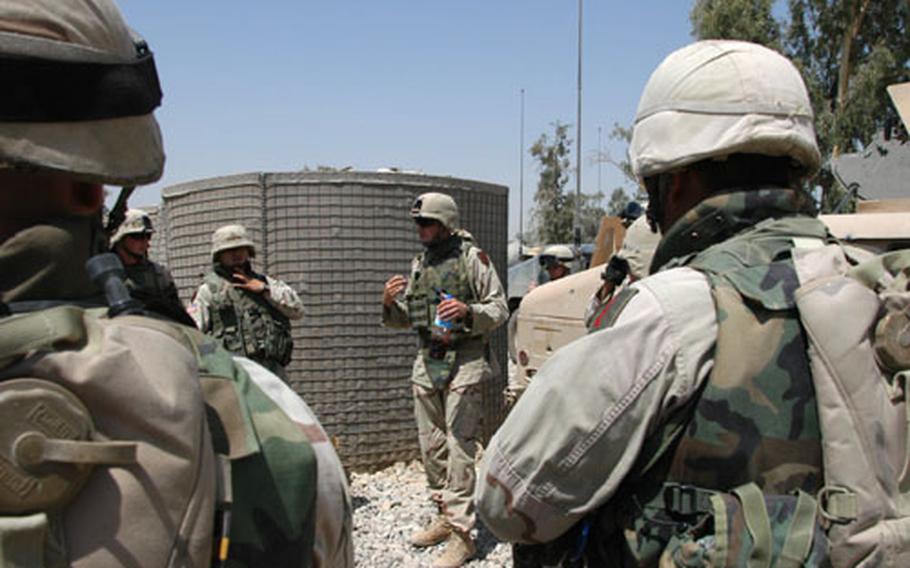 Sgt. Michael Davis, center, gives a safety briefing to soldiers from Company C, 82nd Engineer Battalion, out of Bamberg, Germany, Saturday at Forward Operating Base Gabe, Iraq. The soldiers, from the 3rd and 4th platoons, were about to patrol "Blue Babe Highway" in search of roadside bombs. (Rick Emert / S&S)

Sgt. Michael Davis, center, gives a safety briefing to soldiers from Company C, 82nd Engineer Battalion, out of Bamberg, Germany, Saturday at Forward Operating Base Gabe, Iraq. The soldiers, from the 3rd and 4th platoons, were about to patrol "Blue Babe Highway" in search of roadside bombs. (Rick Emert / S&S) Command Sgt. Maj. John Gioia, 82nd Engineer Battalion, stands next to his shrapnel-scarred Humvee last week. Soldiers from his battalion conduct patrols in search of roadside bombs on the same roadway, known as "Blue Babe Highway," where the damage to his vehicle was caused in June. (Rick Emert / S&S) 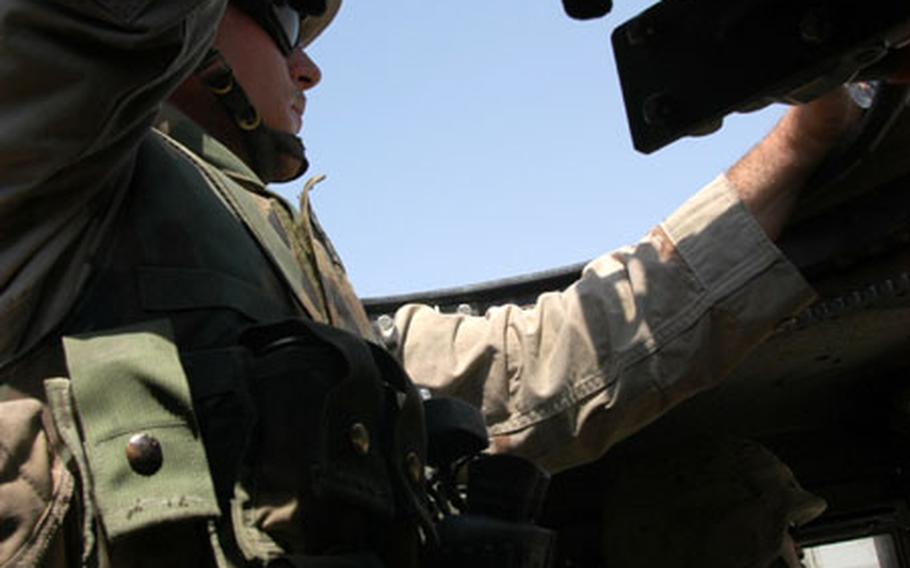 BAQOUBA, Iraq &#8212; If the 82nd Engineer Battalion soldiers are lucky, the hunt for roadside bombs can be the most boring four hours of their lives.

On Saturday, they were lucky.

The patrol involves driving back and forth along the highway, which had little traffic on Saturday, and occasionally parking to watch things.

His head and shoulders poke out of the roof so he can man the gun that sits atop the vehicle.

Sgt. Michael Davis, the vehicle commander, has been luckier. He hasn&#8217;t been hit by an IED, but had a close call with a rocket-propelled grenade, he said.

The driver, Pfc. Sergio Sanchez, is a tank driver from 2nd Battalion, 63rd Armor Regiment, out of Vilseck, Germany. He is attached to Company C.

Three vehicles back, the fourth and last in the convoy, Sgt. 1st Class Mark Patterson, the 3rd Platoon sergeant, is testing the theory that lightning &#8212; in the form of roadside bombs &#8212; won&#8217;t strike the same vehicle twice.

On Thursday, Patterson&#8217;s vehicle was hit by a bomb while he was on one of these patrols. The heat of the blast melted the ballistic window and pushed it inward. It didn&#8217;t break, however. The blast also sent jagged pieces of metal into the tires, flattening both on the passenger side, and into the air conditioner, damaging it beyond repair.

The blast also sprayed minute pieces of shrapnel that struck the gunner, who had minor injuries to his face and returned to duty the next day, Patterson said.

Patterson&#8217;s vehicle was towed back to FOB Gabe.

The one-month-old Humvee was repaired overnight, except for the air conditioning, and put back on the road.

As the patrol begins to roll again, the only sound is the loud engine of the Humvee. The windows are closed to keep shrapnel out; the heat is stifling.

Sanchez and Davis scan the road to the front and their respective sides.

Staderman scans the perimeter to the front and both sides. The hum of the engine seems to melt away and the silence becomes almost maddening. Every vehicle is suspect, as is every mound of dirt on the road&#8217;s shoulder. At any moment, the silence could give way to the next explosion.

It would seem these bomb hunters would be as skittish as wild cats. But their nerve has steeled over the past five months.