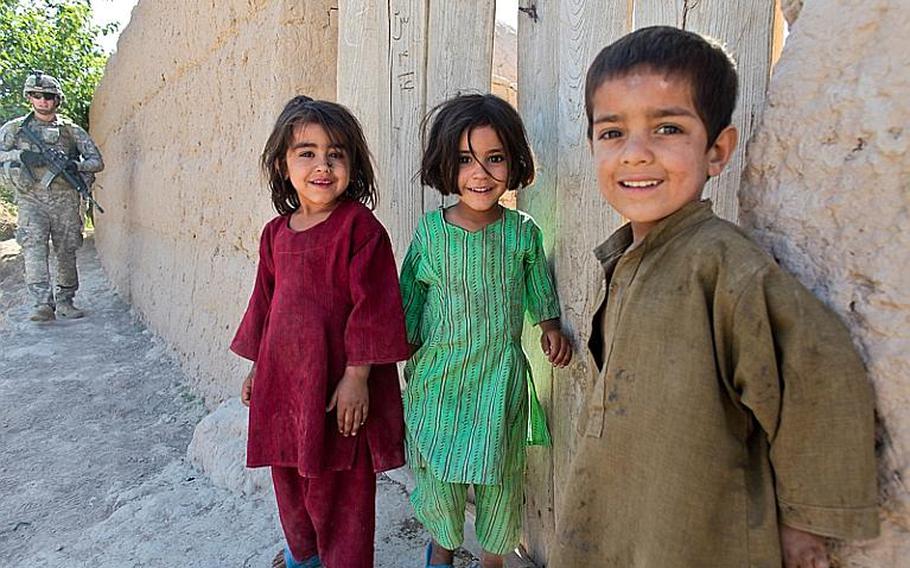 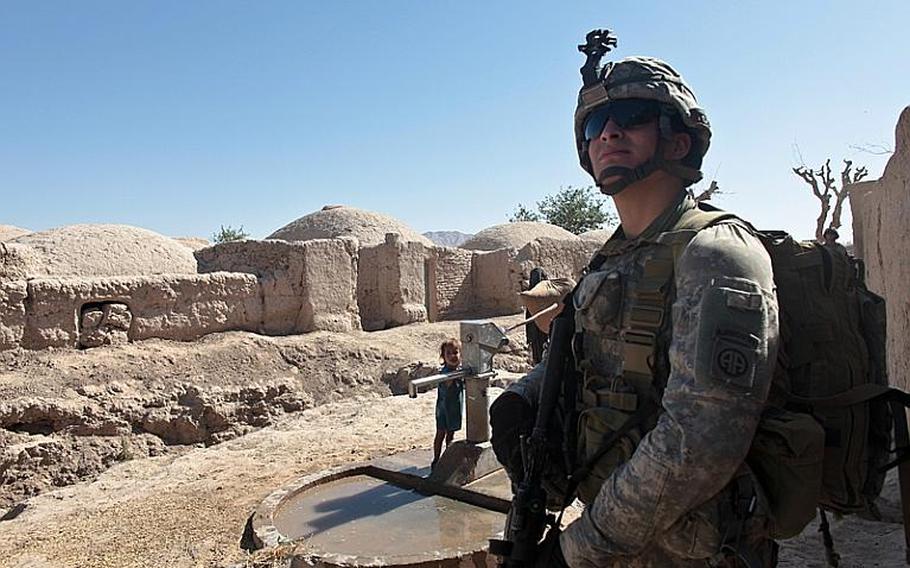 Buy Photo
Spc. Jason Castano, a soldier with Troop C, 4th Squadron, 73rd Cavalry Regiment, checks out the roof of a compound during a pause in a patrol in Bala Baluk district, Farah province, Afghanistan. (Drew Brown/Stars and Stripes) 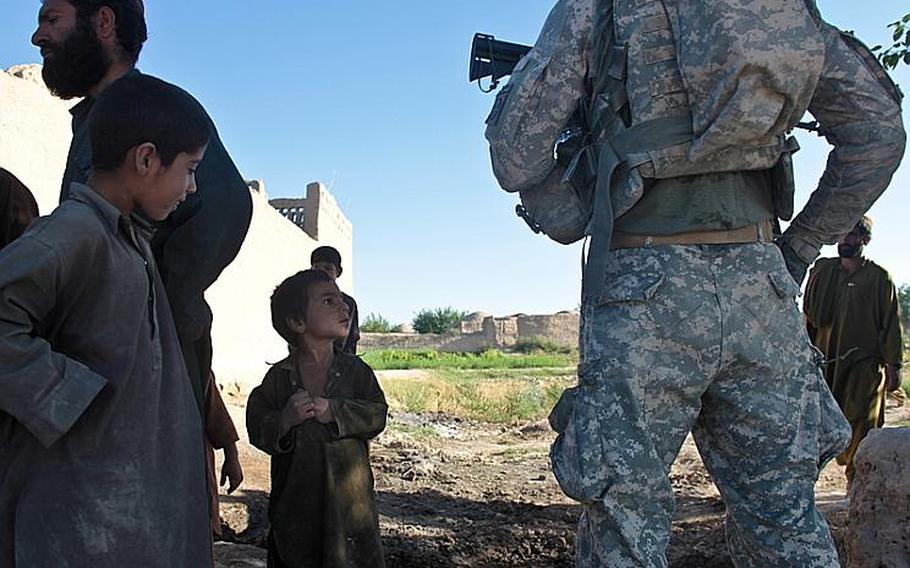 Buy Photo
Curiousity etched on his face, a boy looks up at Sgt. Robert Ostrander, of Troop C, 4th Squadron, 73rd Cavalry Regiment as men nearby talk with other U.S. soldiers patrolling through their village in Bala Baluk district, Farah province, Afghanistan. (Drew Brown/Stars and Stripes) 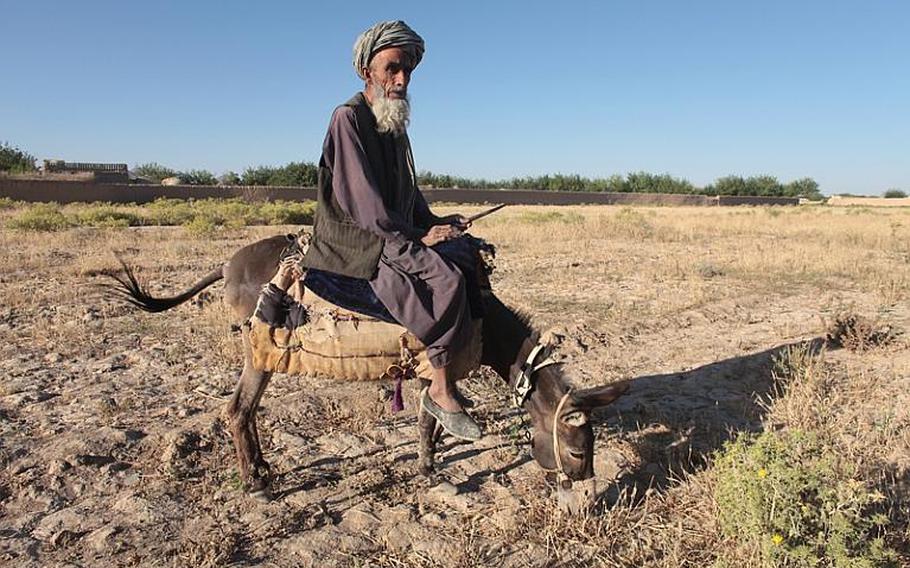 Buy Photo
U.S. soldiers from Troop C, 4th Squadron, 73rd Cavalry Regiment and Afghan police take cover behind a mud wall as shots ring out across a river in Bala Baluk district, Farah province, Afghanistan. It was unclear whether the shooting was coming from Taliban fighters or friendly forces. (Drew Brown/Stars and Stripes) 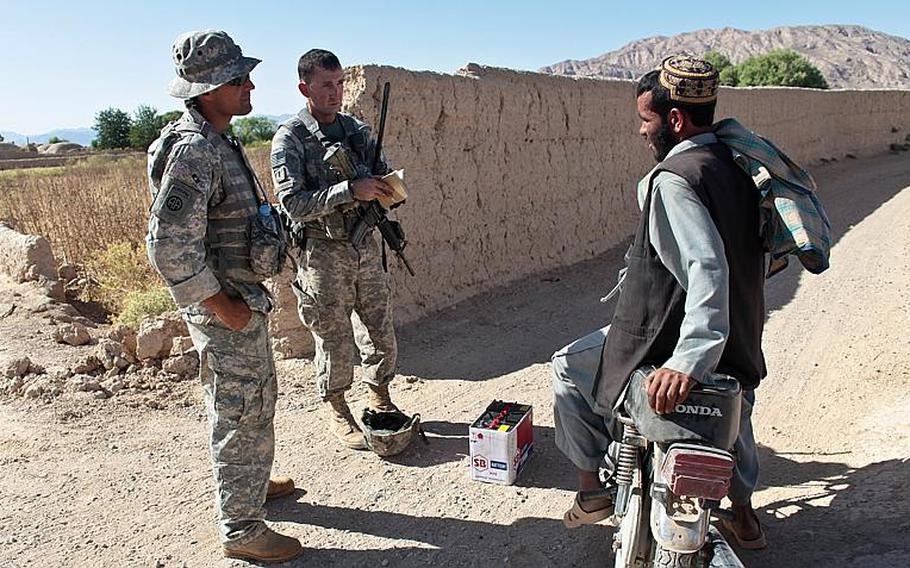 Buy Photo
Mountains loom on the horizon as a soldier from Troop C, 4th Squadron, 73rd Cavalry Regiment patrols in a village in Bala Baluk district, Farah province, Afghanistan, a constant reminder that the challenges of the terrain in the country are often as formidable as those posed by the enemy. (Drew Brown/Stars and Stripes)

FARAH, Afghanistan &mdash; Last summer, Brig. Gen. Mohammed Faqir Askar did not feel safe in his own office. Taliban roamed freely in the streets of this western provincial capital. He thought he could die at any moment.

&ldquo;It was a bad situation,&rdquo; said Askar, the Farah provincial police chief, in a recent interview. &ldquo;At the time, I wasn&rsquo;t a commander. I was a survivor.&rdquo;

&ldquo;When the 82nd came, they solved a lot of our problems,&rdquo; Askar said.

The insurgency in Nimruz province to the south is worsening. The Marjah offensive in Helmand province to the east is still grinding on with no end in sight, and U.S. military officials have said that the campaign to secure Kandahar will last well into the fall, much longer than originally planned.

But in this remote province on the border with Iran, a small bright spot in an otherwise dismal security picture in southern Afghanistan has emerged.

&ldquo;Before we got here, the city would often get rocketed. But now the security zone is beyond their range,&rdquo; said Maj. Gary Kerr, the squadron&rsquo;s executive officer. &ldquo;By being here, we&rsquo;ve also emboldened the ANSF (Afghan National Security Forces). Hopefully, they&rsquo;ll soon be good enough where they won&rsquo;t need us.&rdquo;

Farah is one of the largest but most sparsely populated provinces in Afghanistan, with an estimated 925,000 people spread over 29,000 square miles. Some 65,000 live in the capital city. While not strategically important from a population standpoint, the province shares a 170-mile-long border with Iran, and several roads run through the province that smugglers traditionally have used to transport goods between the two countries and are now used by insurgents to bring in weapons and explosives.

In September 2007, NATO and Afghan troops in Farah uncovered a 10-ton shipment that included armor-piercing explosively-formed penetrator bombs, &ldquo;the biggest weapons haul ever discovered coming from Iran,&rdquo; according to Matthew Dupee, a scholar at the Center for Culture and Conflict Studies at the Naval Postgraduate School in Monterey, Calif.

Farah also contains part of Highway 1, the ring road that runs from Kabul through Kandahar to Herat, the biggest and most important city in western Afghanistan. Controlling the highway and shutting off the smuggling routes is key for Afghan and NATO forces.

Although the mission of the 82nd was to train and mentor local police, soldiers with 4-73 spearheaded a drive in September that cleared the Taliban from a major stronghold in the village of Shewan in the Bala Baluk district and reopened Highway 517, the main road that links Farah to Highway 1 and the rest of Afghanistan.

About 60 Taliban fighters were killed and five Taliban leaders were arrested or killed, with no civilian deaths, according to Kerr.

A Pentagon report released in April assessed Afghans&rsquo; support for the central government in 121 &ldquo;key terrain&rdquo; districts considered crucial for winning the war. Four of Farah&rsquo;s 11 districts were surveyed. The assessment found that residents of Farah city and Bala Baluk were considered &ldquo;sympathetic&rdquo; to the Afghan government.

But two other districts &mdash; Push-t-Rud, northeast of Farah city, and Bakwa, near Helmand province, favored the Taliban. Gulistan district in the remote, mountainous eastern Farah, was considered under de facto Taliban control. Only 24 percent of people in key terrain districts supported the Afghan government, researchers found. Most of the districts examined were in Pashtun-majority areas where the insurgency is strongest.

While Italian troops who have overall responsibility for Farah province have focused on mentoring the Afghan army, U.S. soldiers have mentored local police. Stars and Stripes reported last fall that U.S. commanders found difficulties in motivating and working with the police. However, they say that the Afghans have improved and the police and Army &ndash; which distrust each other in many other areas of the country &ndash; are now working together.

&ldquo;Before we got here, nobody was synchronizing operations between the ANA (Afghan National Army) and ANP (Afghan National Police), so we stepped in to fill that role,&rdquo; said Kerr. &ldquo;The Afghan leaders have now kind of bonded together. Partnership with the U.S. is important, but the partnership between them is more important.&rdquo;

Two recent trips into Farah with U.S. troops revealed a city where security appeared to be reasonably good. Market stalls were full of local produce and basic consumer goods, and shoppers filled the streets. U.S. trucks elicited little more than brief glances from onlookers. Outside the city, many children waved or flashed the thumbs-up sign when U.S. vehicles passed.

&ldquo;Ninety-five percent of the people of Farah are peaceful,&rdquo; said Col. Jumal Khan Hamrazm, of the provincial police. &ldquo;They don&rsquo;t want to fight. They are poor people. They just want to make a living.&rdquo;

Bala Baluk district, about an hour northeast of Farah city on Highway 517, was where a U.S. airstrike in May 2009 killed as many as 140 people, many of them civilians. Surprisingly, U.S. troops say they have encountered no overt hostility there, and have even managed to recruit 40 men into the police force. Bala Baluk was one of the two districts identified in a Pentagon report as &ldquo;sympathetic&rdquo; to the Afghan government.

&ldquo;These people know our rotations. They know the difference between us and other units. They know we weren&rsquo;t the unit involved,&rdquo; said Capt. Mike Trujillo, who only recently handed over command of Troop C, which is posted in the district.

Trujillo and other officers insist that Afghans in Bala Baluk rarely mention the airstrike to U.S. forces. &ldquo;If they bring it up, their attitude is, &lsquo;We&rsquo;re going to keep the enemy out of here because we don&rsquo;t want it to happen again.&rdquo;

While that may sound a bit counterintuitive, the Afghan customs emphasize courtesy to foreigners who are often referred to as &ldquo;guests,&rdquo; and U.S. soldiers often say that Afghans have a habit of saying what they believe the outsiders want to hear.

&ldquo;A lot of it could be them blowing smoke,&rdquo; Trujillo said. &ldquo;But you know there are some good people out there who are telling you the truth.&rdquo;

During several patrols in Bala Baluk, villagers were generally cordial, or at worst indifferent. They seemed willing to tolerate the men with guns, but an air of uncertainty hung over every exchange.

&ldquo;Things are good now,&rdquo; said one man, when asked about security. &ldquo;You are winning now. But who knows what will happen later?&rdquo;