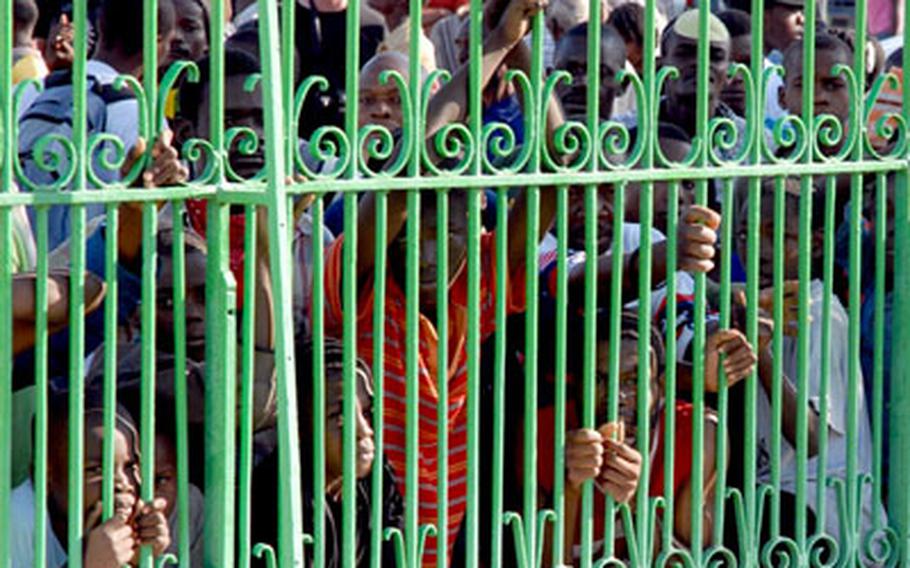 Haitians watch from outside the fence of the presidential palace as helicopters drop off soldiers and supplies. The lush lawn in front of the destroyed palace is one of the few safe landing spots near the hospital. The 82nd Airborne soldiers are doing security at the hospital, which about a five-minute walk south. (Megan McCloskey / Stripes)

Haitians watch from outside the fence of the presidential palace as helicopters drop off soldiers and supplies. The lush lawn in front of the destroyed palace is one of the few safe landing spots near the hospital. The 82nd Airborne soldiers are doing security at the hospital, which about a five-minute walk south. (Megan McCloskey / Stripes) Pfc. Chris Jurgill stands outside the main gate to the hospital compound to keep people from coming in. The Army was tasked with securing the hospital, and their first job was making sure only those who need to be in the compound were allowed to come and go. It only took them a few hours to restore some semblence of order. (Megan McCloskey / Stripes) 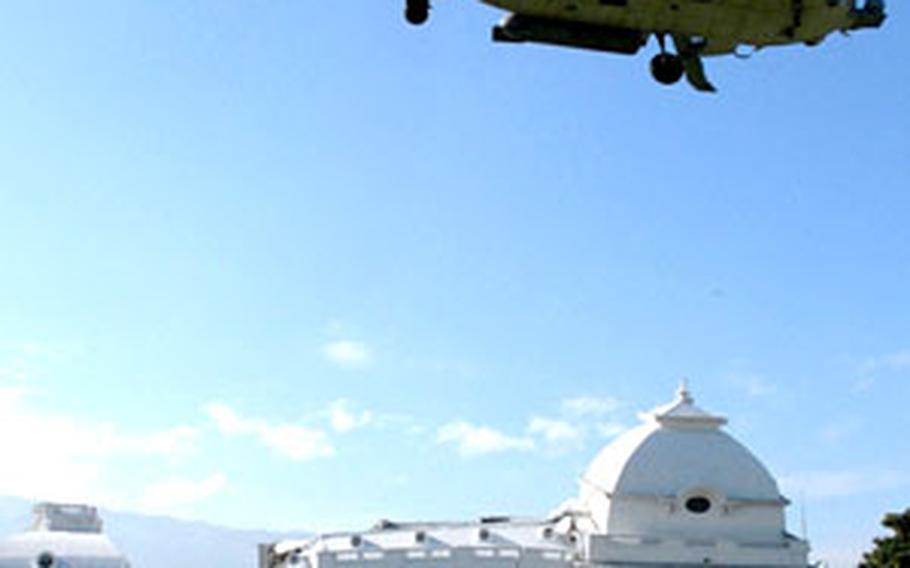 A helicopter drops off supplies of Meals, Ready to Eat and water for the soldiers of Charlie Company, 1st Battalion, 325th Airborne Infantry Regiment with the 82nd Airborne Division. The soldiers have been tasked with securing the nearby hospital. (Megan McCloskey / Stripes)

PORT-AU-PRINCE, Haiti &#8212; Hundreds of Haitians thrust their hands through the green fence surrounding the destroyed presidential palace as soldiers were dropped off by helicopters on the lush lawn.

The soldiers had five days of worth of supplies and a mission to secure the main hospital a few minutes to the south.

Inside the palace compound the world is fairly still &#8212; all those in desperate need are on the outside, crowded in the streets. This is one of the few areas in the heart of Port-au-Prince where helicopters can land safely. The soldiers of Charlie Company, 1st Battalion, 325th Airborne Infantry Regiment with the 82nd Airborne out of Fort Bragg, N.C., used the rare calm to get their bearings and hash out a plan.

With heavy rucksacks they could barely get on their backs without help, they trudged down the trash- and sewage-strewn streets to the hospital, passing buildings that had been almost completely leveled by the massive earthquake that hit last Tuesday.

The soldiers&#8217; arrival didn&#8217;t arouse much response from those camped out on both sides of the streets, which are riddled with pot holes, some as big as four-feet wide. A few waved or stopped to chat but most Haitians did little more than glance up as the soldiers made their way through the crowds. There is near-constant horn-honking and the stench of urine penetrates the air with an undercurrent of sickly sweet rot.

The hospital is in a government compound and has little security. Crowds in the area haven&#8217;t turned violent but the sheer number of people around, most of whom are uninjured, makes it difficult for aid workers to help the injured &#8212; and for the injured to reach the aid workers.

Charlie Company&#8217;s mission over the next few days is to inject some order into the chaos by securing the gates and controlling the surging crowds. The rest of the battalion is outside of Port-au-Prince and largely tasked with humanitarian efforts, such as setting up areas for pallet drops of food and water. They will link up the World Food Program and the United Nations.

In addition to security, Charlie Company is helping the aid workers operate more efficiently. For example, the soldiers are helping to map out the compound. The doctors have had a hard time directing people to where they need go; they have only a scrap piece of paper with a sharpie sketch of the layout.

As the soldiers started to take control of the compound, doctors greeted them warmly and with gratitude.

Only some of the buildings within the compound are still standing. Across from the building soldiers are using as a home base, a nursing school is now a pile of concrete. Aid workers estimate 70 people were killed when the building came down. The stench has only recently become bearable, aid workers say.

At the main gate, the soldiers had just established some control with the gates closed and traffic being routed to a different entrance when an American general wanted to leave and the gates had to be opened again to accommodate him. And then the chaos began anew.

On occasion, the soldiers had to remind each other to keep their hands off their weapons. With this a humanitarian mission, the posture is supposed to be nonthreatening, so many ended up with their hands clasped in front of them.

This is the first deployment for many of the soldiers. The battalion had been in the field training for Afghanistan when they got called in the day after the earthquake. The 2nd Brigade Combat Team was recently designated as the global response force, geared to have boots on the ground anywhere in the world within 96 hours of a disaster.

It&#8217;s unclear how this relief mission will affect their impending deployment to Afghanistan &#8212; or whether units there now will have to stay longer. Some of the soldiers, only partly in jest, are predicting they&#8217;ll get back to Fort Bragg with only enough time to repack for downrange.

The 2nd Brigade Combat Team hasn&#8217;t deployed since returning from Iraq in the spring of 2008. Since being designated the global response force, the Army has given them time to train and prepare as a team for that specific mission.

UPDATE (9:00 p.m. EST): Within a few hours the soldiers had completely turned the situation around. What in the morning was a disorganized, crowded scene became a fairly orderly situation in the afternoon with the roads clear and people easily able to get to where they needed to go. The soldiers were trading shifts throughout the night to guard the gates and keeping watch in other areas.