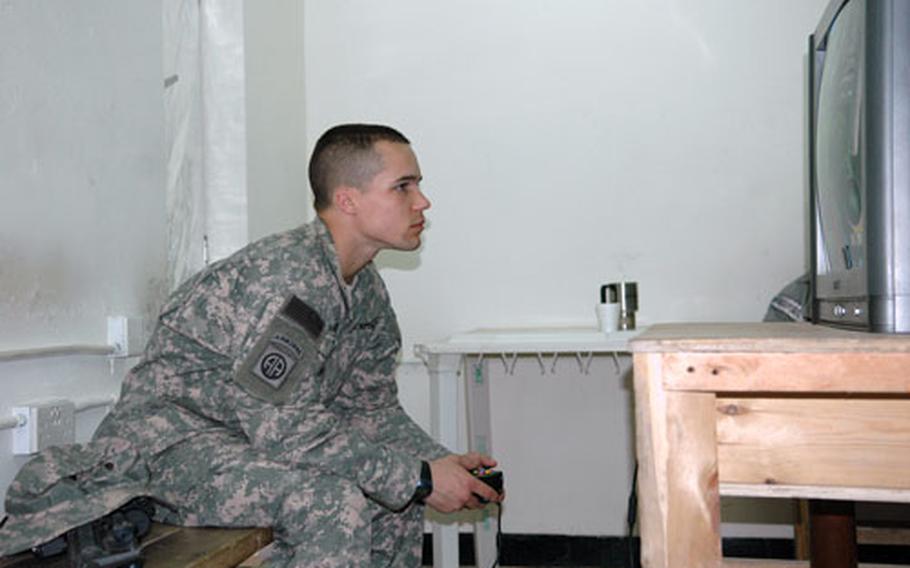 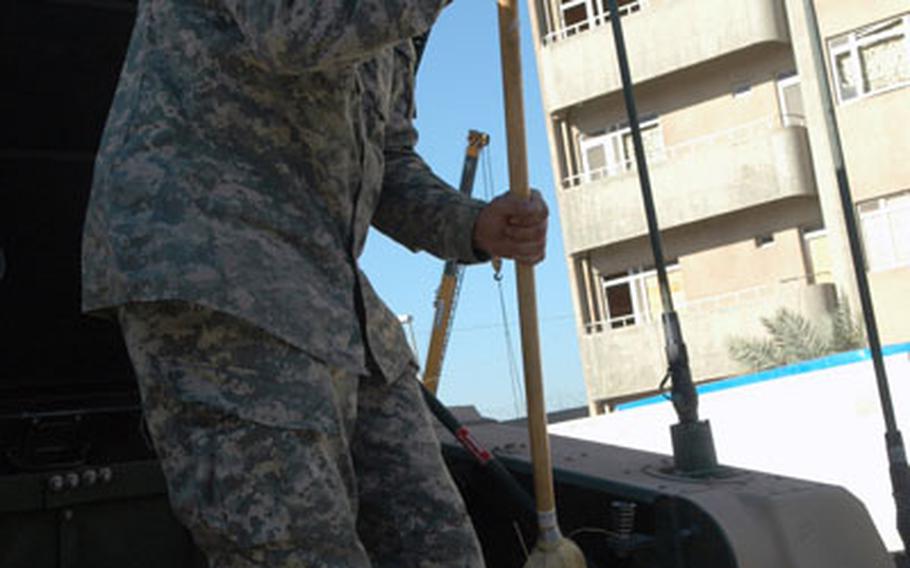 Spc. Eric Rose, 21, of Tracy, Calif., a member of Company D of the 82nd Airborne Division&#39;s 1st Battalion, 504th Parachute Infantry Regiment, sweeps off the bed of his Humvee at Forward Operating Base Loyalty in Baghdad, Iraq. (Lisa Burgess / S&S) 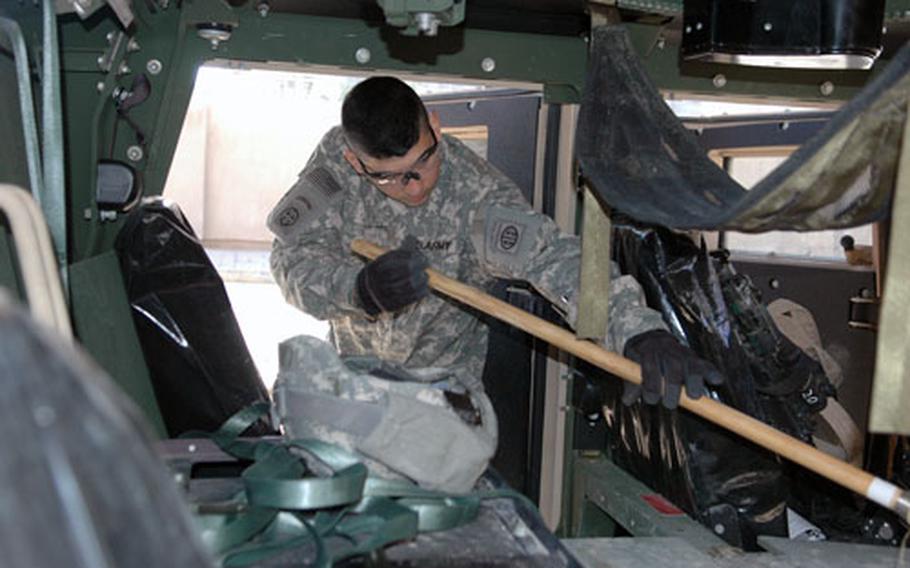 Pvt. Jonathan Duque, 20, of Houston, a member of Company D of the 82nd Airborne Division&#39;s 1st Battalion, 504th Parachute Infantry Regiment, sweeps the Kuwait dust out the inside of his Humvee at Forward Operating Base Loyalty in Baghdad, Iraq. Duque and the rest of the 82nd Airborne battalion, have arrived in Iraq this week as part of the increase of 21,000 troops ordered earlier this month. (Lisa Burgess / S&S)

FORWARD OPERATING BASE LOYALTY, Iraq &#8212; A battalion-sized element of soldiers from the 82nd Airborne Division arrived here by helicopter over the past week, nearly doubling the base population.

The soldiers &#8212; from the 1st Battalion, 504th Parachute Infantry Regiment out of Fort Bragg, N.C. &#8212; are part of the increase of 21,500 U.S. troops ordered by President Bush in early January. The extra troops, whose tour is open-ended, are to help Iraqi forces quell violence in their country, particularly in Baghdad.

Roughly half of the battalion will stay at FOB Loyalty, while the others will move to FOB Rustamiyah, a much larger U.S. outpost about four miles down the road, said Maj. Sean Ryan, a spokesman for the 2nd Infantry Division&#8217;s 2nd Brigade Combat Team. The 2nd BCT is in charge of the East Baghdad area, including the two bases.

For security reasons, Ryan would not discuss precise numbers of U.S. troops at either base.

The 82nd Airborne soldiers came to FOB Loyalty in waves, beginning with the usual small advance elements earlier in January, followed by the entire command group about 10 days ago. The first significant number of troops arrived mid-week, pouring out of enormous Chinook transport helicopters.

Despite the relatively short notice, 2nd Brigade Combat Team officials were determined to have the base ready to welcome the 82nd Airborne.

Given &#8220;at least a month&#8217;s preparation time,&#8221; the 2nd BCT ordered more food and supplies, expanded the motor pools and had new quarters built. Many of the buildings on the base had been reinforced to withstand bombs, rockets and other explosives thanks to the previous tenants, Saddam Hussein&#8217;s Mukhabaret, or secret service.

As the rank-and-file 82nd troops began to arrive at FOB Loyalty, the pace of the usually placid base began to slowly pick up. By Saturday, when the full complement of 82nd troops had arrived, the base facilities were buzzing with young soldiers.

Lines formed in places where they had rarely existed in the past, such as the barber shop and the laundry, where return times &#8212; until now a 24-hour service &#8212; have stretched to 48 hours to accommodate the extra dirty uniforms and socks flooding in.

At the dining hall, meal hours have been extended, and servers are busy packing refrigerators with extra juice boxes and cans of Rip It energy drink.

Some soldiers have grumbled about standing in line and waiting for Internet time, but having the 82nd here at Loyalty has some distinct advantages.

One of those, Ryan said, is that with the 82nd now here, the base finally has enough troops to qualify to host an Army and Air Force Exchange Service store to replace the bare-shelved, soldier-run sundries shop that is the only facility available right now.

Meanwhile with extra troops to accommodate, commanders are working to get additional Morale, Welfare and Recreation upgrades to the FOB, &#8220;like new pool tables,&#8221; Ryan said.