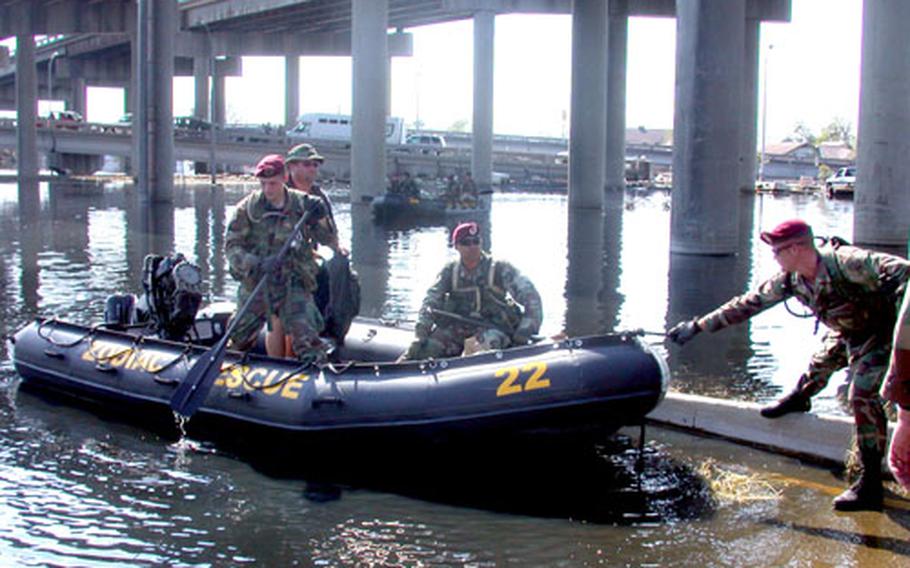 Soldiers from the 82nd Airborne Division’s 307th Engineering Battalion come back to land after a house-by-house search for survivors in a flooded section of New Orleans west of downtown Thursday. (Lisa Burgess / S&S)

The search was just one of the soldiers&#8217; tough balancing acts here in New Orleans, where they are forbidden by federal law from any kind of action that resembles a police action, or even from actions that could be interpreted as &#8220;coercing or influencing&#8221; citizens to leave their flooded or damaged homes and seek refuge elsewhere.

As New Orleans&#8217; Mayor C. Ray Nagin vacillated between cajoling and threatening city residents to evacuate the region, and residents accused local police of using force to eject them from their homes, active-duty troops here studiously avoided the fray.

Owens worked to guide his subordinate commanders through the nuances of the federal law during the morning update at the brigade&#8217;s headquarters at a Naval Station on New Orleans&#8217; West Bank.

Although active-duty troops are not allowed to stop looters or otherwise act as police, their very presence, along with that of thousands of National Guard troops who do have arrest authority, has been enough to quell last week&#8217;s outbreak of crime, Owens said.

Soldiers from the 82nd Airborne and 1st Cavalry Division &#8220;have saturated [their assigned] area, and the streets are secure,&#8221; Owens said, including the fabled French Quarter, where water damage was minimal and many residents were refusing to leave their apartments and houses.

Col. Bryan Roberts, commander of the 1st Cavalry Division&#8217;s 2nd Brigade and a recent veteran of a year in Iraq, said the soldiers owe American citizens all the help the troops can provide in this time of need.