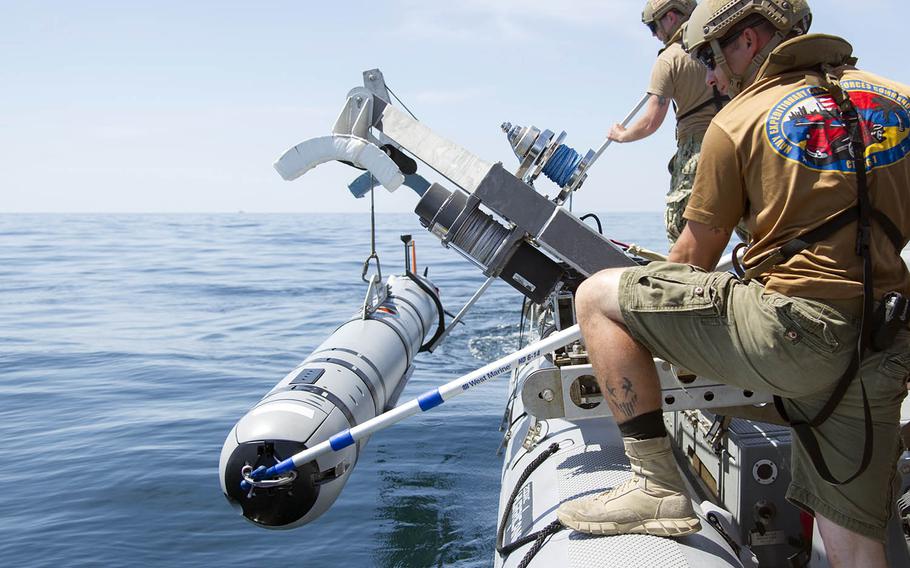 Sailors lower an unmanned underwater vehicle into the sea during a mine-countermeasures drill near Panama City, Fla., May 14, 2016. (Charles Oki/U.S. Navy)

The Defense Department has awarded a nearly $800 million contract to research and develop underwater drones — a move some experts say emphasizes its growing interest in unmanned technologies.

The Pentagon selected last week 23 companies to share the contract, and each will be given tasks related to “the procurement of materials and services used to develop, build, fabricate and support the Unmanned Undersea Vehicle Family of Systems,” according to the contract announcement issued July 30.

Work on the project is expected to be completed by July 2023.

The contract supports a growing trend of defense dollars being spent on drone development. In its fiscal year 2019 budget, DOD requested $9.6 billion for unmanned technology and related systems — a 28 percent increase from the previous year, according to a report released June 25 by the Association for Unmanned Vehicle Systems International.

“Unmanned systems and robotics are key technology areas that enable the United States to counter the range of evolving threats posed on the modern battlefield,” AUVSI president and CEO Brian Wynne said in an email to Stars and Stripes.

The Navy has led all service branches in dollars put toward drones for at least the past three years, according to AUVSI. More than half of all drone projects for the land, air and sea are under the Navy’s purview.

The Mk 18 Unmanned Undersea Vehicle was a highlight of the 2019 budget request, with the Pentagon asking for $75 million for the underwater drone mainly used for mine countermeasure operations, according to the AUVSI report. Other purposes for underwater drones used by the Navy include data collection and surveillance.

The Navy in May released a summary of its “Strategic Roadmap for Unmanned Systems,” stating the integration of drones in the service “offers many advantages such as reducing personnel and manpower, risk to personnel and operating costs.”

“Employment of manned/unmanned teams and technologies will transform modern warfare, increasing asymmetric operations, leveraging the technologies to the [Navy’s] advantage and give the warfighter the edge to win the fight,” the summary said.

“Why is this historical? It’s because in standing up UUVRON 1, it shows our Navy’s commitment to the future of unmanned stems and undersea combat,” he said a statement issued last year.

In its roadmap summary, the Navy said the use of drones will “provide access to areas denied to manned platforms; provide better situational awareness; increase capabilities with greater range and persistence; and enable faster decision making” in the future.