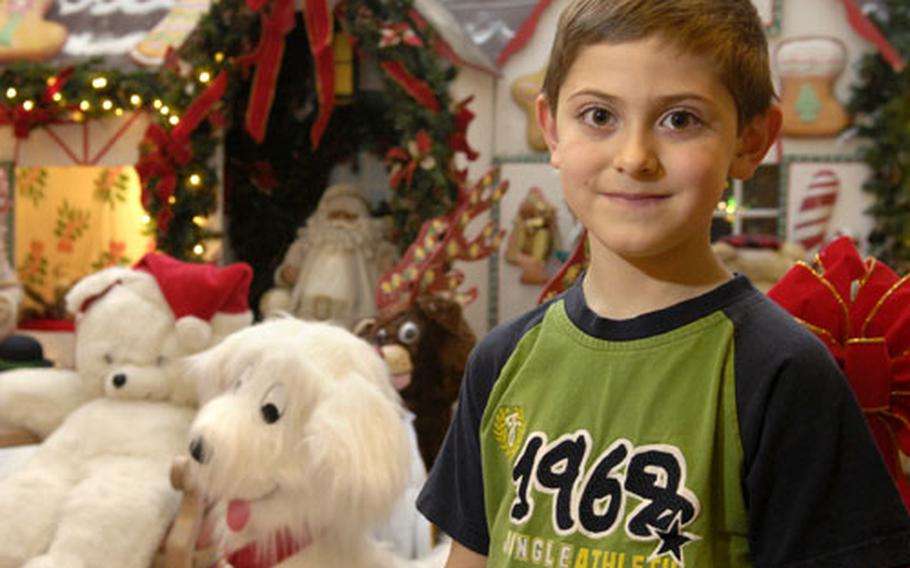 Andrew Stombaugh, an 8-year-old whose dad is a Senior Master Sergeant at Ramstein, poses for a photo at the Ramstein Community Center Thursday. Stombaugh decided to donate his birthday presents to an Army toy outreach program that ensures less-fortunate families have presents under the tree for their children. (Ben Bloker / S&S)

KAISERSLAUTERN, Germany &#8212; Andrew Stombaugh has no toys to show from his birthday party held Dec. 2, and he couldn&#8217;t be happier.

That&#8217;s because the Ramstein Elementary School second-grader, who turned 8 on Dec. 1, decided to donate his birthday presents to an Army toy outreach program that ensures less-fortunate families have presents under the tree for their children.

&#8220;I have so many toys, and there are kids who have no toys,&#8221; said the son of Air Force Senior Master Sgt. Brian Stombaugh and Rosemarie Stombaugh.

It was before Thanksgiving, and Andrew was at the Vogelweh PowerZone. He spotted a large donation box for the U.S. Army Garrison Kaiserslautern&#8217;s Army Community Service&#8217;s toy outreach program. Andrew asked his mother what the box was for, and she explained. Then on his own volition, Andrew told his mom he wanted to donate his birthday presents to the program.

The 10 friends from school who attended Andrew&#8217;s birthday party were told to bring their gifts unwrapped because Andrew was going to donate them. Andrew also went through his closet, found some new toys he hadn&#8217;t used and decided to donate them as well.

Andrew&#8217;s friends gave him a soccer ball, Legos, a board game, puzzles, books and more, which were all donated to the toy outreach program.

Earlier this month when Andrew dropped off the toys, the ACS staff was on hand as well as Lt. Col. Mechelle B. Hale, Kaiserslautern garrison commander, who presented Andrew with a commander&#8217;s coin.

&#8220;It was really a big deal for an 8-year-old to be so selfless in that manner, so considerate of other children,&#8221; said Gwen Galloway, toy outreach program coordinator.

Another child heard what Andrew did and donated one of his Christmas presents to the toy outreach program.

The 10 kids who initially gave Andrew the presents for his birthday were also recognized. Each child received a free movie pass from AAFES.

The toy outreach program is for those who are having a rough time financially this holiday season and need a hand. Soldiers identified by their units receive the donated toys for their children.