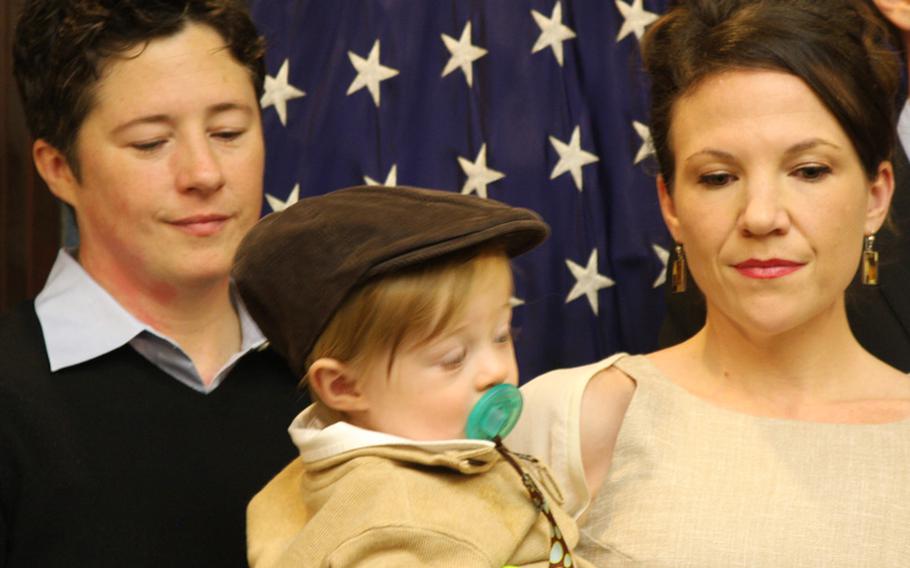 Army National Guard Maj. Shannon McLaughlin (left) and her spouse, Casey, take care of their 10-month-old son, Grant. The couple has been legally married for three years, but federal laws prohibit Casey from receiving any housing or health benefits from the military. (Leo Shane/Stars and Stripes)

Army National Guard Maj. Shannon McLaughlin (left) and her spouse, Casey, take care of their 10-month-old son, Grant. The couple has been legally married for three years, but federal laws prohibit Casey from receiving any housing or health benefits from the military. (Leo Shane/Stars and Stripes) 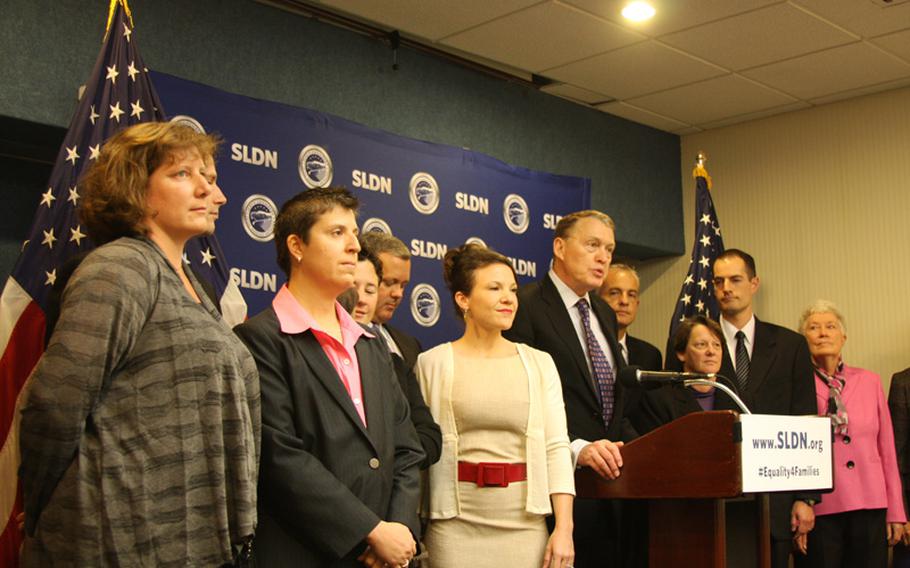 Aubrey Sarvis (center), executive director of the Servicemembers Legal Defense Network, speaks at a Washington, D.C. press conference Thursday announcing a new lawsuit challenging the Defense of Marriage Act. With him are the plaintiffs and their spouses, who argue that a federal law barring them from receiving military benefits is discriminatory. (Leo Shane/Stars and Stripes) 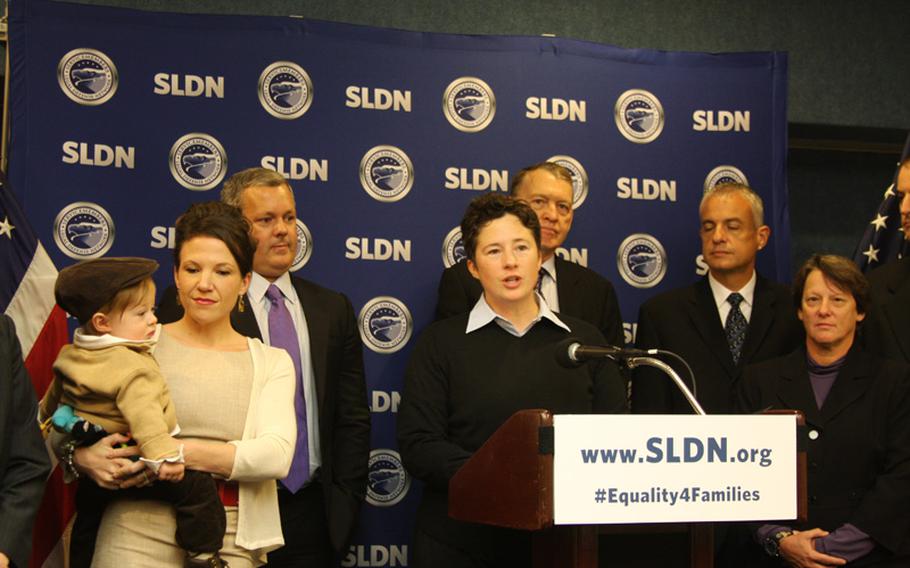 Army National Guard Maj. Shannon McLaughlin (center) speaks with reporters beside her spouse, Casey, and her 10-month-old son, Grant. The couple has been legally married for three years, but federal laws prohibit Casey from receiving any housing or health benefits from the military. (Leo Shane/Stars and Stripes)

WASHINGTON &mdash; A group of eight gay servicemembers sued the federal government Thursday for military and veterans benefits for their same-sex spouses, arguing that ignoring their marriages amounts to discrimination.

The move comes a little more than a month after the end of the military&rsquo;s controversial &ldquo;don&rsquo;t ask, don&rsquo;t tell&rdquo; law, which for 18 years prohibited gay troops from publicly acknowledging their sexual orientation.

Since the change, activists have said they&rsquo;d turn their attention to overturning the Defense of Marriage Act, which prohibits the federal government from recognizing same-sex unions for purposes of federal benefits.

Officials from the Departments of Defense and Veterans Affairs have cited the law as the reason they will not extend housing, medical and education benefits to same-sex military couples. Those behind Thursday&rsquo;s lawsuit say that cheats troops out of thousands of dollars in benefits, and creates inequality among gay and straight troops.

&ldquo;This case is about one thing &hellip; justice for gay and lesbian servicemembers and their families,&rdquo; said Aubrey Sarvis, executive director of the Servicemembers Legal Defense

Network, a gay-rights group that filed the lawsuit. &ldquo;These couples are in long-term, committed and legally recognized marriages, and the military should not be forced to turn its back on them because the federal government refuses to recognize their families.&rdquo;

But 39 states have laws or constitutional amendments prohibiting state agencies from performing or recognizing those same-sex marriages.

Earlier this year, House Republicans inserted language into their draft of the annual defense budget bill to strengthen DOMA, mandating that the Defense Department not recognize same-sex marriages. That language is not expected to pass out of the Democratic-controlled Senate.

Proponents of the change said the law also bars same-sex spouses from many non-monetary benefits, such as military identification cards and access to military support programs.

Earlier this month, one of the plaintiffs, Army National Guard Chief Warrant Officer Charlie Morgan, petitioned Congress to get her same-sex spouse access to a unit reintegration ceremony. The event was only open to &ldquo;married&rdquo; couples.

&ldquo;As plaintiffs, we are fighting to receive the same benefits and opportunities as our married heterosexual counterparts,&rdquo; she said during a Thursday news conference announcing the lawsuit. &ldquo;We are only asking for fair and equitable treatment as a recognized family.&rdquo;

Army National Guard Maj. Shannon McLaughlin, who has been deployed overseas in support of Operation Enduring Freedom, said her same-sex partner can&rsquo;t get on military bases for medical appointments or recreation services, a major hardship since she takes care of the pair&rsquo;s twin 10-month-olds.

&ldquo;We&rsquo;ve been serving our country too long, working too hard and sacrificing too much to see our families denied the same recognition, support and benefits as out straight married counterparts,&rdquo; she said.

The lawsuit was filed in Massachusetts District Court, a jurisdiction that has already ruled against the constitutionality of the Defense of Marriage Act. Lawyers involved in the suit hope that could speed up resolution on this complaint, possibly resulting in a ruling in the next few months.