8 air support airmen back at Ramstein 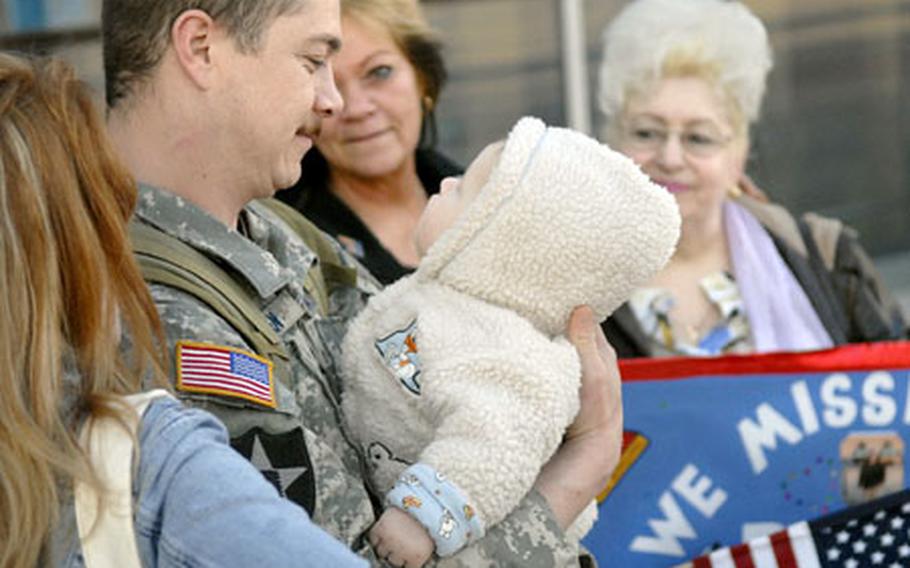 Tech. Sgt. Adam Jensen, a joint terminal attack controller assigned to the 1st Air Support Operations Squadron at Ramstein Air Base, Germany, gazes into the eyes of his 7-month-old son, Cayden, after returning home Saturday from a six-month deployment to Baghdad, Iraq. Jensen is surrounded by his wife, Aljona, foreground, his mother Darlene, center, and his mother-in-law Katerina, right. (Ben Bloker / S&S)

But the members of the 1st and 2nd Air Support Operations Squadrons who are stationed around Germany could have easily been mistaken for soldiers because of what they were wearing.

The airmen, who worked hand-in-hand with Army units to arrange air support, were clad in the muted digi-camouflage of the Army Combat Uniform. Their name tapes, however, were stitched in blue, with one of them identifying the servicemembers&#8217; branch as the &#8220;U.S. Air Force,&#8221; and their Air Force ranks were visible on their chests.

Uniform questions aside, the eight airmen worked side by side with Army units in Iraq from as far west as Ramadi to as far east as the Iranian border. Within a few minutes of U.S. troops making enemy contact, the airmen could have air power overhead to provide surveillance, firepower or low sweeps in a show of force.

Dodson likened the job to being a fireman.

Upon exiting the Ramstein passenger terminal Saturday, Tech. Sgt. Adam Jensen hugged his family and then spent minutes gazing into the eyes of his 7-month-old son without saying much. When Jensen deployed, Cayden was just a month old. Now the child has grown considerably.

When asked how it felt to be home, Jensen had only a few words.

Clearly, the specific emotion was hard to express in words, yet easily recognizable to anyone observing Jensen while he held his son and smiled.