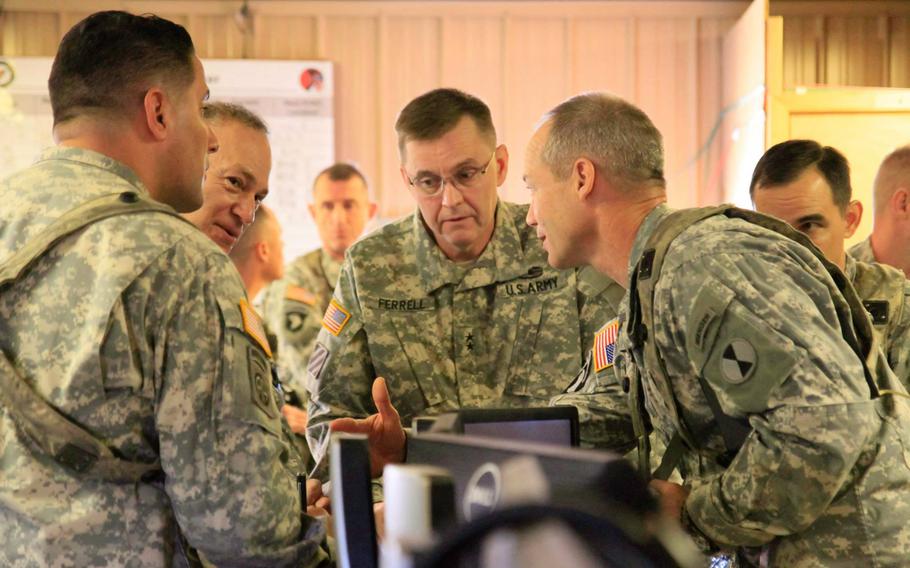 Lt. Gen. Stephen R. Lanza, I Corps commander, second from left, and Maj. Gen. Terry Ferrell, 7th Infantry Division commander, center, are briefed by Task Force Bayonet leaders at the Joint Operations Center at Fort Polk. La., on Feb. 13, 2015, during a training exercise. The task force, made up of about 50 soldiers from 7th Infantry Division and a dozen from 2nd Brigade Combat Team, will leave later this spring for a yearlong deployment to Kandahar Airfield, Afghanistan. (Mark A. Moore II/U.S. Army)

JOINT BASE LEWIS-MCCHORD, Wash. — Just days before President Barack Obama’s expected announcement to slow the withdrawal of troops from Afghanistan, a team of soldiers was wrapping up a training exercise in preparation for a yearlong deployment to Kandahar.

Troops from the 7th Infantry Division and the 10th Mountain Division’s 2nd Brigade Combat Team have formed a “mission command node” — a kind of ad hoc headquarters that will deploy to Kandahar Airfield later this spring to advise Afghan security forces.

It will be the first combat deployment for troops wearing the 7th Infantry Division patch in more than 25 years; the unit had been deactivated but was reactivated in 2012 as a non-deployable unit.

But in 2013, unit leaders were asked what it would take to get the troops ready to deploy.

Ferrell said they would need some additional training and equipment, but they were capable. And so, in December, the Army announced that the unit would go to Afghanistan for a year.

The 2nd Brigade Combat Team soldiers, on the other hand, had known since the middle of last year that they would be going to Afghanistan, but they didn’t know any specifics until December, said Col. Dave Doyle, 2nd BCT commander. About a dozen troops from the unit, including Doyle, will join the 7th ID headquarters unit to form “Task Force Bayonet,” while roughly 1,600 other troops from 10th Mountain Division will be spread around the country doing different missions.

To prepare, the soldiers spent about a month training at the Joint Readiness Training Center at Fort Polk, La., and last week the headquarters soldiers trained together at Joint Base Lewis-McChord, working with troops who are serving in Kandahar now to make sure they’re practicing the right types of scenarios.

“The mission is train, advise and assist, but with heavy emphasis on advise and assist,” Doyle said. “We’re doing a lot less training now because we’re working with the Afghan corps headquarters and above. So really what we’re trying to do is help them with their systems.”

He said the exercise helped the soldiers work through how to advise the Afghan security forces on things like making sure troops are paid on time and getting the right kind of fuel to the right places.

“We’re not trying to solve their problems for them, because that’s not effective in the long run,” he said. “We’re really not in the business of telling them what to do.”

When Obama meets this week with Afghan President Ashraf Ghani and Chief Executive Abdullah Abdullah in Washington, he is expected to announce plans next week to slow down the pace of troop withdrawals between now and the end of 2016 to maintain security in Afghanistan. Current plans call for a U.S. drawdown to 5,500 troops by the end of this year, but the Obama administration has said previously it might keep more troops in Afghanistan next year.

The U.S. will “never be gone from Afghanistan because Afghanistan is an important country in the world,” Obama’s defense secretary, Ash Carter, said following a visit to Kandahar last month.

And even when the U.S. presence is reduced, he said, “we want to make sure that the Afghans themselves are able to preserve the environment our forces have created over the last few years, one of relative security and stability.”

Doyle has served in Afghanistan several times, including in 2001 and as recently as 2013, and said that in working with the soldiers who are serving in the Kandahar area now, he can see that while the problems remain the same, the Afghan approach to solving the problems have progressed.

Many of the other soldiers in the unit have also deployed to Afghanistan previously, and they also are eager to go back to see the progress, he said.

“You have folks who’ve committed an awful lot of their lives and made enormous sacrifices related to the success of this effort, and so, to be able to continue to provide that input is important,” he said. “But also, to see the fruits of their labor and watch the Afghans really taking responsibility and ownership, and really taking it on as their own mission, is encouraging.”

Ferrell said the soldiers with 7th ID also look forward to proving the unit can adapt and deploy.

“We give the Army a capability [it] didn’t have before,” said Ferrell, who will remain at McChord while Brig. Gen. Paul Bontrager leads Task Force Bayonet.

That capability is critical, Ferrell said, because despite the drawdown, the Army still has about 120,000 soldiers forward deployed.