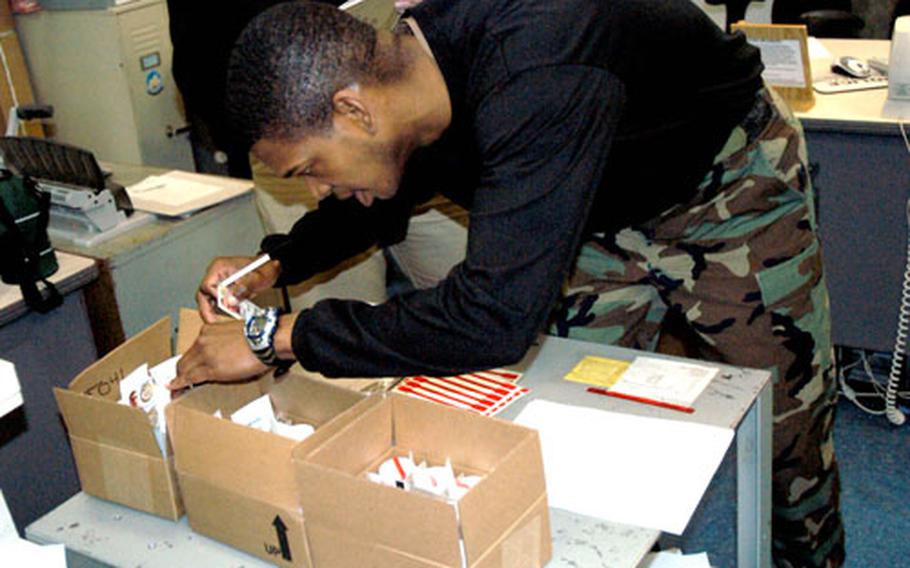 Petty Officer 1st Class Eric Patrick Butts, master-at-arms and command investigator on the USS Kitty Hawk, looks over containers that will be used to collect urine under the stringent 7th Fleet urinalysis drug testing program. From the moment sailors are randomly selected for testing, the process follows a careful procedure to prevent tampering until Butts receives and seals each sample. (Juliana Gittler / S&S)

The change comes as the fleet transforms its testing program to withstand the challenge of devices, products and methods sailors have used to defeat the system.

With names like the Whizzinator &#8212; a prosthetic urine-containing device used to falsify a urinalysis result &#8212; any product or device that can cleanse, flush or dilute one&#8217;s system of drugs now is considered contraband and is illegal.

Possessing and using such a device can be punishable under the Uniform Code of Military Justice.

The policy is part of sweeping changes to the fleet&#8217;s drug testing program that followed a series of busts. In the past year, more than 40 sailors were charged with drug use after urinalysis or through investigations.

Rear Adm. James D. Kelly, commander of Carrier Strike Group 5, said those numbers were a staggering wake-up call. He is responsible for about 8,500 7th Fleet sailors and the ships involved in the recent cases.

Last year, an investigation of several sailors who tested positive on their urinalysis tests indicated 19 drug users aboard the USS Vincennes. During the investigation, Navy leaders learned that sailors had surprising ways of beating the drug testing system.

&#8220;We very clearly got real surprised by our investigation into the circumstances that surrounded the Vincennes bust. Maybe it [was] the tip of the iceberg. It certainly [was] indicative of the way folks can get around the policy.&#8221;

The Vincennes had been the model of a good drug program, Kelly said. At the time, 40 percent of the ship was tested each month, far exceeding the Navy&#8217;s requirements.

But by using flushing products, borrowed urine and predictions of when testing would occur, sailors were avoiding getting busted.

The investigation results, Kelly said, demonstrated the extent of the problem.

One sailor in particular later charged with drug use had been tested multiple times and didn&#8217;t test positive.

After the busts on the Vincennes and other ships under Kelly&#8217;s control, he and other Navy leaders got creative. Testing times and subjects were made more random. Sailors were monitored more closely during the testing process. And, with the new rule on flushing products, attempts to dupe the testing system are now illegal.