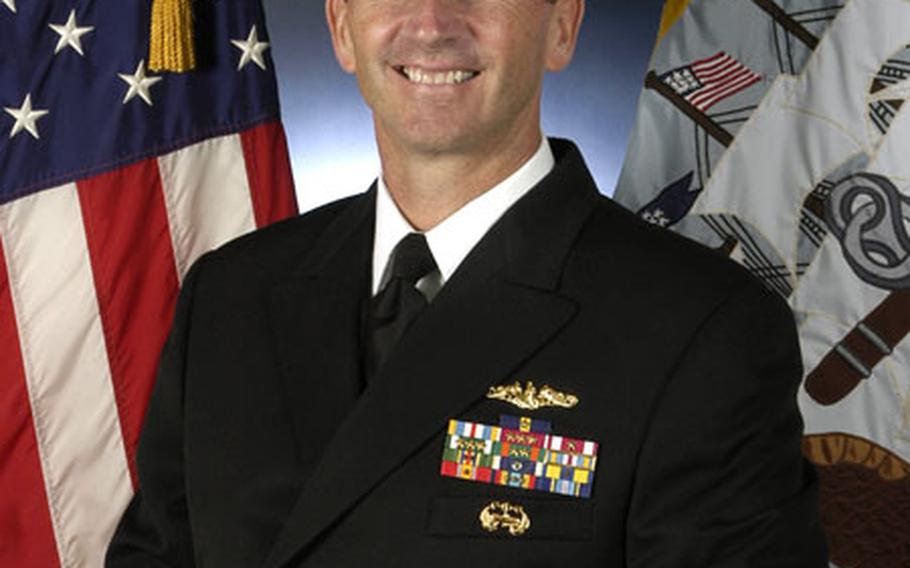 ABOARD THE USS CORONADO &#8212; At the start of each workday, Vice Adm. Jon Greenert takes inventory.

First up, North Korea. Have there been any provocative moves, worrisome exchanges, giant explosions, test-fired missiles?

&#8220;You look at the intelligence and our readiness: Where are our ships? Are they where they need to be?&#8221; Greenert said.

Then it&#8217;s on to China and Taiwan, an assessment of the tensions and threat level there, and whether the fleet is poised to respond.

It&#8217;s a long way south, with more than 50 million square miles of the Pacific and Indian oceans &#8212; stretching from the International Date Line to the east coast of Africa, and from the Kuril Islands in the north to the Antarctic in the south &#8212; within the fleet&#8217;s area of operations. In that expanse are many countries, most of which bear historic suspicions and grudges toward each other, and at least one country, North Korea, considered a major threat to nearly all the others and to the United States.

Greenert, the 7th Fleet&#8217;s new commander, does his daily survey to ensure that all of his 40 or more ships, his submarines and aircraft and at least 20,000 or more sailors and Marines are where they need to be and ready to do what they need to do to keep the peace &#8212; or, if that fails, to win the war.

The job requires a mix of attributes, former 7th Fleet commanders have said, not often found together in nature. In addition to all one might expect from a vice admiral in charge of the world&#8217;s largest forward-deployed fleet, the 7th Fleet commander, more than almost any other U.S. naval commander, also should possess the subtlety and tact of a diplomat.

In the 7th Fleet, the commander and flagship spend more than half the year conducting operations, exercises and port visits.

Greenert has been in charge of the 7th Fleet for only the past six weeks, but his association with the region and fleet operations stretches more than eight years. In 1997, he served as the fleet&#8217;s chief of staff, followed by a year spent as Pacific Fleet representative to Micronesia. For the two years before he took over the 7th Fleet in August, he served as the Pacific Fleet&#8217;s deputy and chief of staff.

The 7th Fleet conducts numerous exercises each year with the navies of Japan, especially, as well as South Korea, Thailand, Singapore, the Philippines and other nations. Cocktail parties and receptions may be pleasant, Greenert said, but &#8220;things are accomplished during operations, at the conference table and on calls.&#8221;

Whatever their historical grievances, most Asian countries find common ground in several areas, Greenert said: fighting terrorism, search-and-rescue operations and dealing with natural disasters such as typhoons. Those areas of interest provide an opportunity for joint, instead of bilateral, exercises.

This year, Greenert said, the 7th Fleet is emphasizing a regional maritime security initiative to try to get a better handle on what ships are doing in Asian waters. Greenert points out that maritime travel is far less structured and regulated than aviation.

Just as Greenert&#8217;s biggest worry is North Korea, he said he&#8217;s been busy these past weeks getting the 7th Fleet&#8217;s newest mission &#8212; missile defense &#8212; up and running by Oct. 1. One of the fleet&#8217;s three Aegis-equipped destroyers &#8212; the USS Curtis Wilbur, the USS John S. McCain or the USS Fitzgerald &#8212; will take the first, historic patrol in the Sea of Japan to provide early warning of any ballistic missiles fired by North Korea. It&#8217;s the first time the United States has deployed ships for missile defense; it was banned under a treaty from which the United States withdrew in the beginning of the George W. Bush administration.

Greenert, from a small town in western Pennsylvania where nearly a third of the residents are of German descent, graduated from the U.S. Naval Academy in 1975 with a degree in ocean engineering.

He spent the next 20 years or so as a submarine officer, he said, and completed studies in nuclear power. So he can speak at length about how the submariners&#8217; mission has grown increasingly sophisticated in communications, weaponry and function &#8212; &#8220;I don&#8217;t want to call it a starship,&#8221; he said &#8212; and says someday there&#8217;ll be unmanned submarine weapons acting much like Predators do now in the air.

He&#8217;s especially interested in an upcoming exercise called Undersea Dominance. The exercise will test a variety of communications sensors for acoustical detection and processing to determine whether the equipment works in 7th Fleet waters.

Other 7th Fleet commanders have noted that among the perks of the job is the fact that their bosses reside thousands of miles away, in different time zones and a day behind.