7th Fleet in Pacific has its own personnel issues 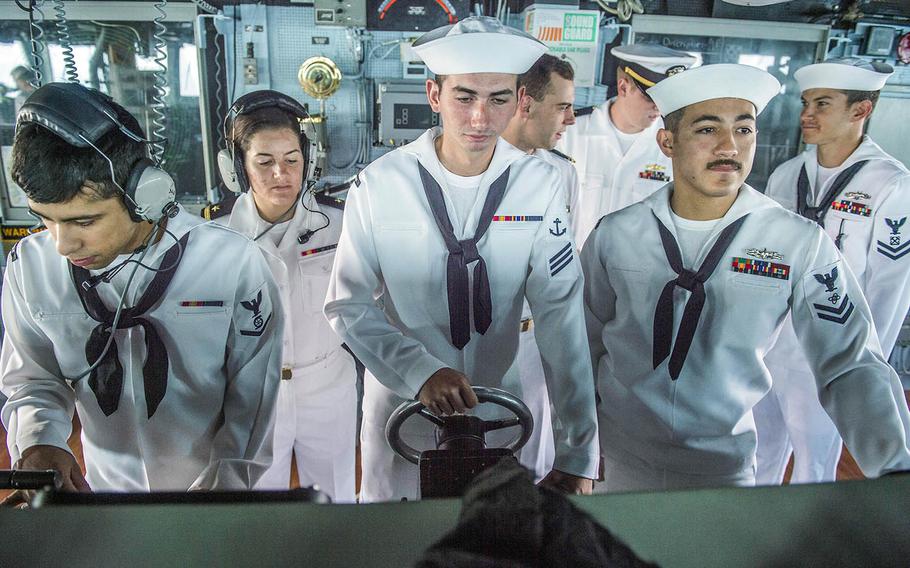 Sailors stand watch on the bridge of the guided-missile destroyer USS Fitzgerald as the ship arrives in Busan, South Korea, in 2015. (Patrick Dionne/U.S. Navy) The guided-missile destroyer USS Fitzgerald returns to Yokosuka Naval Base after a collision with a merchant vessel off Japan. (Kryzentia Weiermann/U.S. Navy) 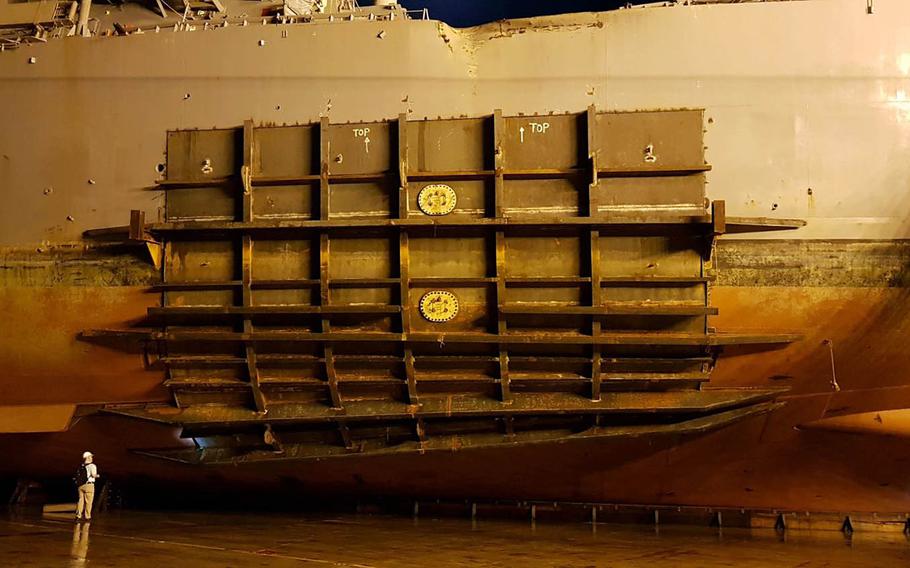 The collision-damaged USS John S. McCain is loaded onto a heavy-lift transport vessel for its return trip to Yokosuka Naval Base, Japan, Oct. 6, 2017. (Joshua Fulton/U.S. Navy)

Crews aboard the forward-deployed surface ships of 7th Fleet in the Western Pacific — where a spate of collisions and groundings recently occurred — labor under the legacy of Navy-wide manning issues but also their own dilemmas of personnel churn due to shorter tour lengths, unsustainably high operational tempo and delayed training.

“The morale in 7th Fleet has gone down, based on command surveys over the last few years, and it’s gone down noticeably,” said Bryan Clark, a senior fellow with the Center for Strategic and Budgetary Assessments in Washington and a former strategic planner for the Navy.

“That’s a function, in large part, of the high op-tempo,” he said.

Japan-based 7th Fleet ships had such aggressive deployment timetables that they did not have dedicated training periods, as ships based on the U.S. mainland have, a 2015 Government Accountability Office report found.

“In fact, we were told that the overseas-based ships were so busy that they had to train on the margins,” said John Pendleton, the GAO’s director of Force Structure and Readiness Issues, during a Sept. 19 Senate hearing on the deadly collisions of the USS Fitzgerald on June 17 and USS John S. McCain on Aug. 21.

One of the forward fleet’s manning challenges is filling in-demand technical jobs, such as sonar techs and operations specialists, who operate radars and navigational systems on bridges and combat information centers, Lt. Cmdr. Curtis Mitchell, the assistant chief of staff for 7th Fleet Manpower, Personnel and Administration, told Stars and Stripes in July.

The manning crunch for such skilled people is likely exacerbated by Department of Defense mandates that limit prescribed tour lengths for 7th Fleet vessels as compared to those for mainland-based ships.

For example, the Navy would typically assign an E-3 seaman just out of operations specialist school to a five-year tour on a U.S.-based ship, according to Navy data. However, if assigned to a 7th Fleet ship in Japan, that sailor would do only a two-year tour, or three years if accompanied by family.

The same tour disparity exists for sonar techs in the two locations.

“There probably is a lower overall level of readiness that results from the higher level of churn that you get in the forward deployed naval fleet as opposed to the [U.S. mainland-based] forces,” Clark said. “I think it’s more a function of changing out people and a lack of familiarity than necessarily these guys coming in green as untrained operators. They’re trained operators; they’re just not necessarily familiar with that ship.”

“The Navy plans for sailors to work about 80 hours a week — which is grueling enough — but in reality the sailors are often working over 100 hours per week,” Pendleton told Stars and Stripes.

“An example of work that is not accurately accounted for is time spent by experienced personnel providing on-the-job training or time spent by new arrivals receiving this training,” he said. “Navy officials and crew members we interviewed told us that sailors often arrive to their assigned ship without adequate skills and experience. Crew members told us that more experienced sailors routinely provide on-the-job training for less experienced sailors, so the time doing this must come out of sleep and personal time.”

Still, as one former surface warfare officer points out, increasing tour lengths in Japan would be a trade-off with its own negative consequences.

“For a sailor who may never have been to Japan before to be posted there for four or five years can be asking a lot, and the op-tempo can lead to significant burnout,” said Steven Stashwick, a lieutenant commander in the Navy Reserve who left active duty in 2015 after a decade as a surface warfare officer.

That’s especially true for op specialists and sonar techs who “find themselves on much more intense watch rotations than their stateside counterparts due to the nature of the waters and operations that the ships in 7th Fleet conduct,” he said.

“Even someone who came to Japan full of motivation can start to look forward to going back stateside after a while.”

Those training deficits appear at least partially to blame for the deaths of seven Fitzgerald sailors and 10 sailors aboard McCain.

Watch-standers aboard Fitzgerald, both on deck and in the combat information center, were not paying attention to the right-hand side of the ship prior to its collision with the tanker ACX Crystal, according to a DOD investigation report released Wednesday.

Meanwhile, the officer of the deck failed to contact the tanker, take evasive action or warn the commanding officer and crew of the hazardous situation, according to the report. The McCain collision occurred after confusion led to five steering configuration changes in roughly three minutes, the report said.

As of June, 37 percent of warfare certifications for cruiser and destroyer crews based in Japan had expired — a fivefold increase in expirations in two years, the GAO found.

Clark said the system of forward deploying naval forces could function better if the Navy returned to its original intent of a slower op-tempo.

“The goal was to be underway or away from home 50 percent of the time and be home doing maintenance or training 50 percent of the time,” he said. “That would have afforded them sufficient time to do the training and certification their plan said they needed. They need to stop what they’re doing and stay within the terms of the deployment and go back to ensuring ships are completely certified before they get underway. That means they’re not going to be able to deploy as much or as often.”

Schwegman said it was a “mistake” to assume that high op-temp and workload “are synonymous with low morale.”

“Generally speaking, we have found that morale tends to be better in units where there is a balance between the operations, maintenance and training,” she said.

Nevertheless, high op-tempo “is an issue we take very seriously and the Navy is taking immediate steps to address it.”

Among those steps was the creation of the Naval Surface Group Western Pacific “to act as the broker between training and maintenance on the one hand and underway operations on the other hand,” Schwegman said.

“They will monitor the pulse of the waterfront and act as an authority that will ensure ships and crews are appropriately manned, trained, qualified, certified, and in sufficient material readiness to get underway when called upon,” she said.