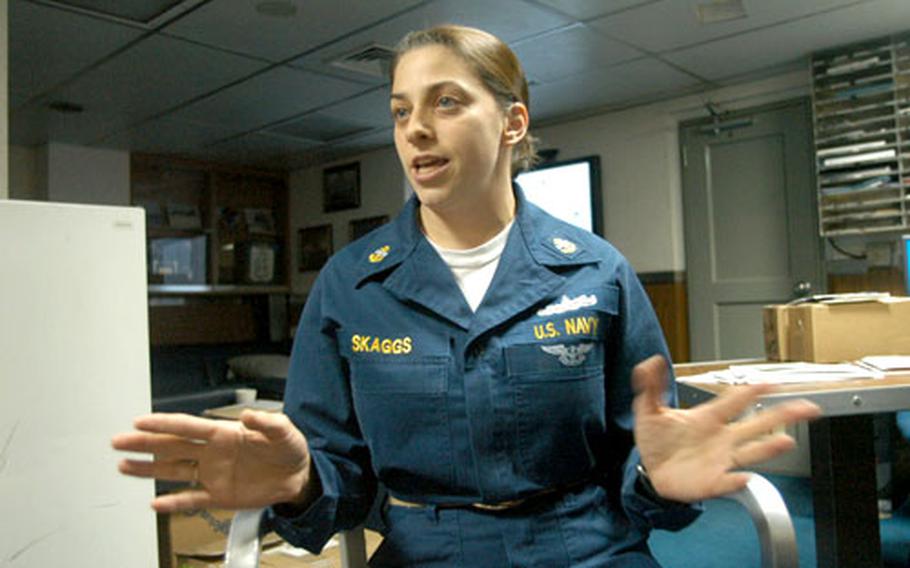 Chief Petty Officer Michele Skaggs says small groups and honest discussions are important when it comes to talking about sexual assault in the Navy. The general military training coordinator is part of a recent movement in the 7th Fleet to create programs that stress preventing sexual assault instead of programs that react to it. (Allison Batdorff / S&S)

YOKOSUKA NAVAL BASE, Japan &#8212; Pairing up with a male liberty buddy when the ship pulls into port is not an invitation for sex.

In fact, 7th Fleet plans to talk and talk and talk about sexual assault to prevent it. The fleet started a proactive training program last week that is scheduled to run through January 2007.

&#8220;We believe in preventative maintenance, not damage control,&#8221; said 7th Fleet Command Master Chief Tom Howard aboard the USS Blue Ridge on Thursday. &#8220;We want to educate people to stop it from happening.&#8221;

Education starts with a 45-second video and continues in small group discussions. Many people have questions they won&#8217;t ask in big groups, said Chief Michele Skaggs, the general military training coordinator. Sexual assault prevention refreshers will be given when ships pull into port, as most assaults happen during liberty, Skaggs said.

&#8220;Navy women are always going into different countries where they might not know how to flag a cab or where the police station is,&#8221; Skaggs said. Plus, Navy women hang out with their peer groups, which usually are vastly male. Skaggs, for example, is one of six female chiefs in a group of about 80, she said.

And, for every assault that gets reported, statistics say 10 others did not, he added.

This effort also may be implemented in Pacific Fleet and the 2nd Fleet, as both asked for the training materials, Howard said.