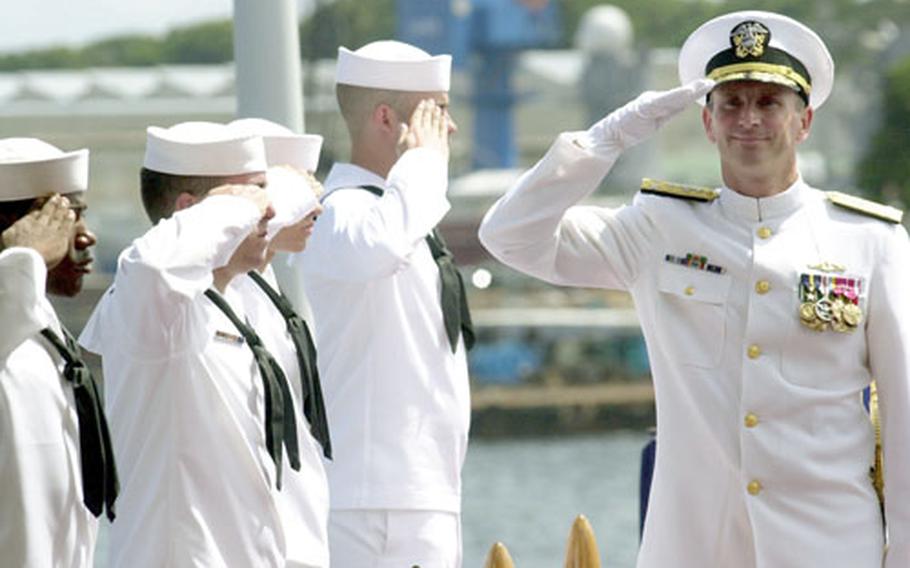 Vice Adm. Jonathan Greenert arrives at Yokosuka Naval Base as the new commander of the Seventh Fleet. The traditional change of command ceremony was held on the USS Coronado on Friday. (Jim Schulz / S&S)

Vice Adm. Jonathan Greenert arrives at Yokosuka Naval Base as the new commander of the Seventh Fleet. The traditional change of command ceremony was held on the USS Coronado on Friday. (Jim Schulz / S&S) 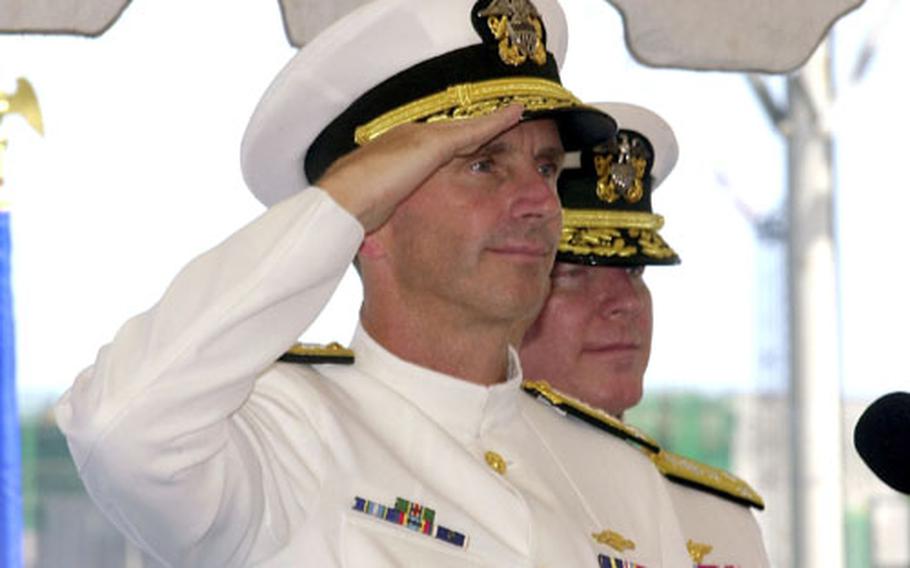 Vice Adm. Jonathan Greenert salutes at Yokosuka Naval Base where he begins service as the new commander of the Seventh Fleet. The traditional change of command ceremony was held on the USS Coronado on Friday. (Jim Schulz / S&S)

YOKOSUKA NAVAL BASE, Japan &#8212; Vice Adm. Jonathan Greenert took command Friday of the U.S. Navy&#8217;s 7th Fleet, even as most of his 21 ships and 20,000 sailors were at sea somewhere in waters he now watches over from the Western Pacific to the Indian Ocean.

On the deck of the USS Coronado, draped in red-white-and-blue bunting and filled with sailors in their summer whites and women in their summer dresses, Greenert assumed command from Vice Adm. Robert Willard as some 300 visitors watched.

Willard, after two years as 7th Fleet commander, is heading to the Pentagon to advise the Joint Chiefs of Staff on naval structure, testing and resources.

Greenert, a U.S. Naval Academy graduate who began his career as a submarine officer assigned to the USS Flying Fish, most recently served as the Pacific Fleet&#8217;s deputy chief of staff, a position in which Willard also preceded him.

The ceremony&#8217;s mood was festive, the speeches lavish with praise. Adm. Walter Doran, Pacific Fleet commander who was in charge of the 7th Fleet from 1998 to 2000, said in his speech that the critical relationship between the United States and Japan means that only the best, most experienced commanders would be assigned to command Seventh Fleet.

Congratulating Willard for improving readiness during wars in Afghanistan and Iraq and lauding his abilities as diplomat, leader and warrior, Doran said the job of 7th Fleet commander &#8220;has never been done better.&#8221;

Greenert takes command of the Navy&#8217;s largest forward-deployed fleet and what is a primary stabilizing force in Asia as tensions over North Korea&#8217;s nuclear capabilities and the conflict between Taiwan and China are high. In addition, there are continuing concerns about fundamentalist terrorism in the region and the maintenance of long-standing security treaties.

When Doran was relieved of 7th Fleet command four years ago, he quoted a predecessor, Adm. Carlisle Trost, who, despite going on to become Chief of Naval Operations before he retired, still said that being 7th Fleet commander was his favorite assignment.

Adm. Trost said this week from his home in Annapolis, Md., that he still thought that the 7th Fleet job was best in his career, particularly because of the great diplomatic responsibility he and other 7th Fleet commanders enjoy. He said an effective 7th Fleet commander needs &#8220;diplomatic skills, operational competence, being able to command forces and know what to do with the forces. You need a mixture.&#8221;

Asked what advice he would give a new 7th Fleet commander, he paused, then said: &#8220;Know your people, know your forces, know your threat and be prepared every day to meet the threat that might hit you today or tomorrow.&#8221;

But on Friday, the talk was more about baseball than about threats. Willard noted that Doran had given him a painting, done in the style of Norman Rockwell, featuring him as a &#8220;scruffy young batter,&#8221; with Doran as the all-knowing manager in the dugout, looking a little bored, wondering how the batter will perform.

But Greenert did them one better.