7th Fleet commander looks back at a 'fascinating' job 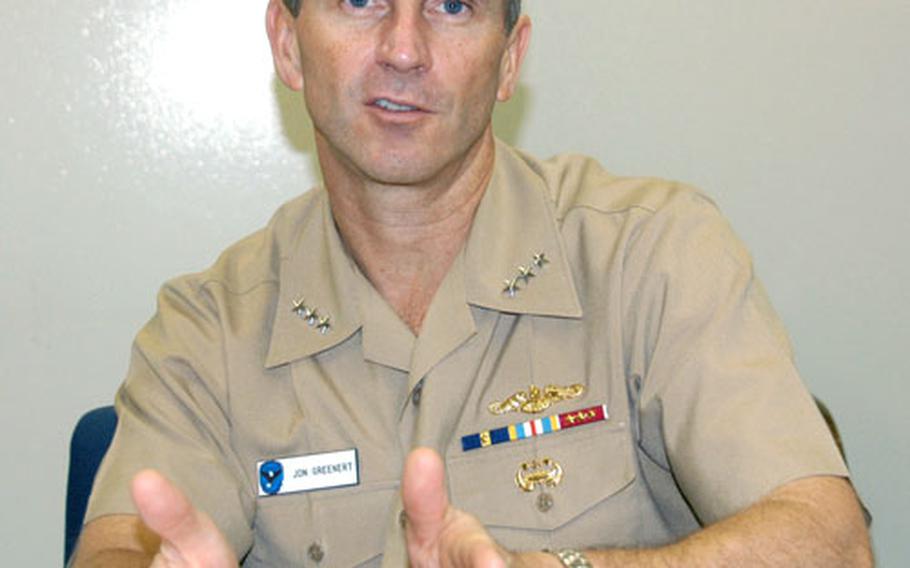 YOKOSUKA NAVAL BASE, Japan &#8212; Vice Adm. Jonathan Greenert, preparing to turn over command of the 7th Fleet, said he&#8217;s most proud of the strengthened ties between the U.S. Navy and navies in nations such as Japan, South Korea and India.

&#8220;My counterparts in those navies were willing to take on new endeavors and in some cases, take on the risks to work with us side by side,&#8221; he said in an interview Thursday with Stars and Stripes.

&#8220;I would&#8217;ve liked to have taken our interoperability with Southeast Asian nations a little further &#8230; establish more navy-to-navy operations, most particularly in Indonesia &#8230; That window is still open,&#8221; he said.

On Tuesday, he&#8217;s to hand over leadership of the world&#8217;s largest forward-deployed naval force to Vice Adm. William D. Crowder aboard the USS Blue Ridge, the 7th Fleet flagship.

Greenert will become the Navy&#8217;s chief financial officer. Crowder, who&#8217;ll be the 7th Fleet&#8217;s 45th commander, arrives from the Pentagon, where he was assistant deputy chief of naval operations for plans, policy and operations.

Calling Yokosuka the &#8220;foundation of the U.S. Navy in Asia,&#8221; Greenert, who became the 7th Fleet commander in August 2004, said America&#8217;s image around the base was severely tested during his two-year tenure. The Jan. 3 beating death of a 56-year-old Japanese woman by a USS Kitty Hawk sailor &#8220;took a dramatic withdrawal out of our goodwill account,&#8221; he said.

The USS George Washington&#8217;s arrival to replace the Kitty Hawk in 2008 likely will cause more anxiety among Japanese. But Greenert said he believes the transition can be smooth.

Greenert, who led U.S. sailors and coalition forces in more than 200 operations and exercises during his tenure, said shared U.S. and Asian goals, such as clearing shipping lanes of pirates and terrorists, is key to theater security.

North Korea and its threat of short-range and ballistic missiles has become a focal point of the U.S., Japanese and South Korean navies, Greenert said, but the reclusive communist nation&#8217;s arsenal of submarines and mines also pose maritime threats.