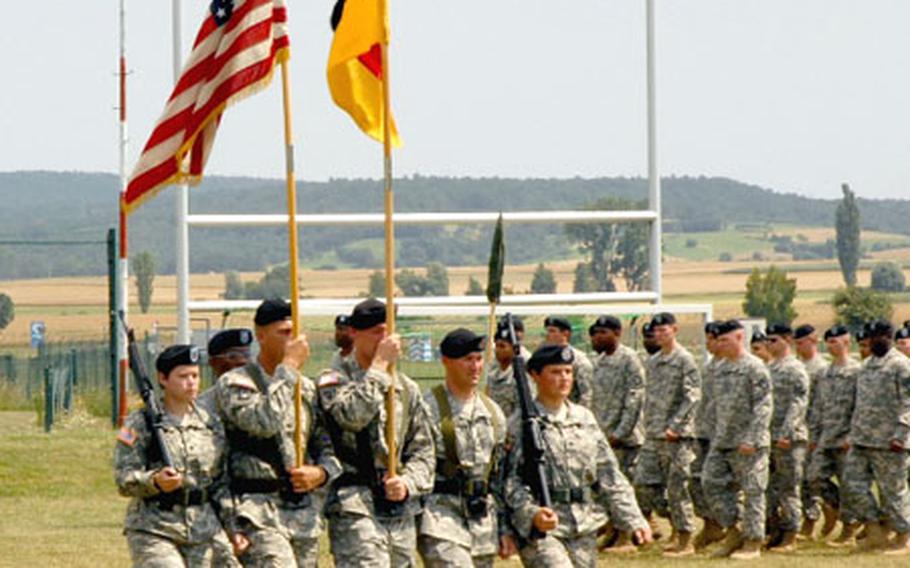 ILLESHEIM, Germany &#8212; A short-lived yet proud history of one Army aviation unit came to a close Thursday during an inactivation ceremony at Illesheim&#8217;s Storck Barracks.

As part of the Army&#8217;s ongoing transformation plan, 7th Battalion, 159th Aviation Regiment&#8217;s colors were cased for the final time, ending 19 years of service in Illesheim.

&#8220;Today we say farewell and thanks to the 7th Battalion, 159th Aviation Regiment. This unit has a proud history and a legacy built not just here in Germany,&#8221; said Col. Timothy Edens, 1st Armored Division&#8217;s 4th Brigade commander. Edens will soon take over command of Katterbach, Germany&#8217;s 12th Combat Aviation Brigade, where many of the 7-159&#8217;s soldiers are headed.

&#8220;Thank you for all the hard work, endless hours and frustrating tasks you have done,&#8221; Edens told the assembled soldiers during the ceremony. &#8220;Thank you to those who came before you and built the proud legacy.&#8221;

In the 38-year history of the 7-159, the unit has participated in many of the Army&#8217;s major campaigns, including Vietnam and every major conflict since Operations Desert Shield and Storm in the early 1990s. Most recently, the battalion&#8217;s Alpha and Bravo companies spent a year in Afghanistan during Operation Enduring Freedom.

&#8220;I knew we had to prepare for a yearlong deployment downrange and then transformation,&#8221; he said.

The unit&#8217;s primary mission was providing intermediate aviation maintenance. O&#8217;Donnell said that even though the Army continues to transform, the individual soldier&#8217;s job doesn&#8217;t change.

&#8220;These are some of the best logistics soldiers the Army has to offer,&#8221; he said of his once 650-member battalion. He expressed confidence that all of his soldiers would perform admirably at their new duty stations.

Illesheim was not the only community affected by the inactivation. The battalion&#8217;s Company B had been stationed at Giebelstadt Army Airfield, which has been in the process of closing for several months.

The official end-date for 7-159 is Oct. 1. Roughly half of the battalion&#8217;s members are moving on to jobs in the States or leaving the service. The remainder will be used to fill positions throughout Europe, particularly in Illesheim and Ansbach, where elements of the 12th CAB are located.