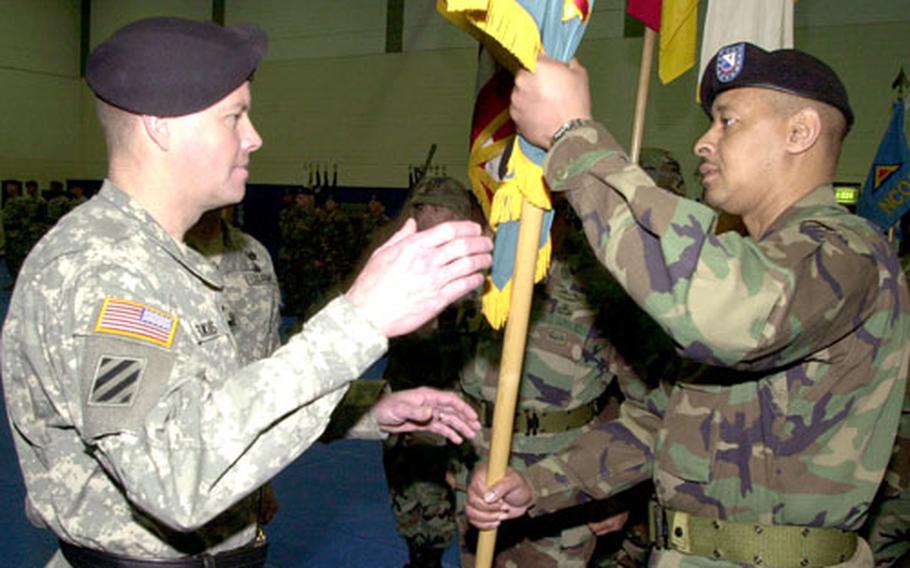 GRAFENW&#214;HR, Germany &#8212; The soldier who oversaw transformation of the 7th Army Noncommissioned Officer Academy here and its adoption of the Warrior Leadership Course retired Thursday after 30 years of service.

&#8220;The academy is not the same academy he took over &#8212; both literally and physically,&#8221; Perkins said, referring to the construction of new classrooms, barracks and an award-winning state-of-the-art dining facility that opened there in March last year.

Campbell also oversaw the academy&#8217;s implementation of the new Warrior Leadership Course &#8212; a course that enlisted troops need to complete to become an NCO, Perkins said.

&#8220;All these things have come in under his guidance and have flourished under his leadership,&#8221; he said.

Multinational troops who visit Grafenw&#246;hr often are amazed by the academy, which Perkins described as the diamond in the JMTC crown.

&#8220;We take them to our multimillion-dollar simulators and ranges and all the toys we have here and they are moderately interested,&#8221; he said, adding that what really interested visitors was the NCO Academy.

Visitors also ask where the U.S. Army finds such outstanding individuals to serve as NCOs, he said.

&#8220;We build the NCOs ourselves. We build and make what is the envy of the world right here (at the NCO Academy). And they go out and lead our Army across the globe,&#8221; he said.

Campbell, who joined the Army in May 1976, praised the staff and cadets at the academy.

&#8220;Standing before you is a group of NCOs that will carry this academy to the next level. Our country is at war and the academy&#8217;s mission has never been more important,&#8221; he said.

Campbell said he planned to retire to Columbia, S.C., with his wife, Janice.