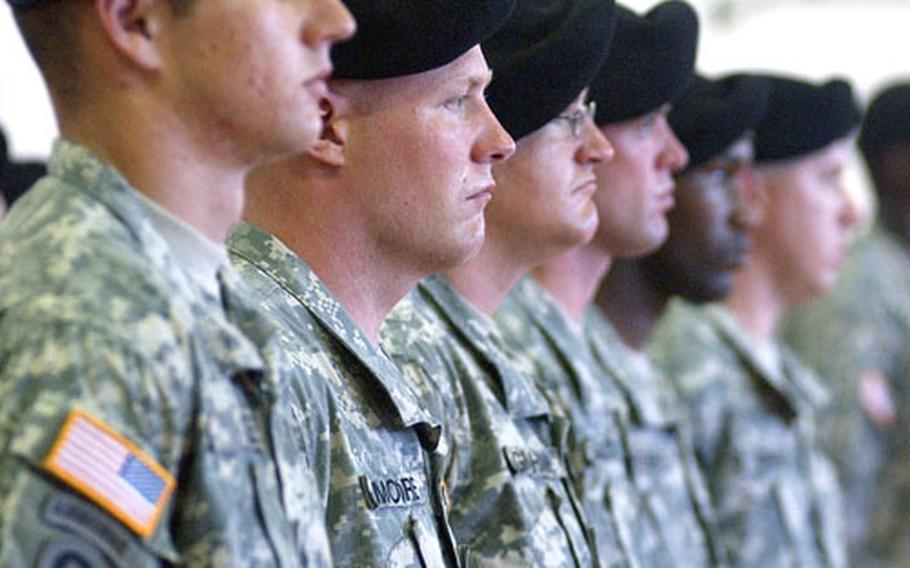 Soldiers of the 77th Maintenance Company listen to a speech at the official homecoming ceremony for the unit in Babenhausen, Germany on Thursday. They returned to Germany in April after being deployed to Operation Iraqi Freedom. (Michael Abrams / S&S)

Soldiers of the 77th Maintenance Company listen to a speech at the official homecoming ceremony for the unit in Babenhausen, Germany on Thursday. They returned to Germany in April after being deployed to Operation Iraqi Freedom. (Michael Abrams / S&S) 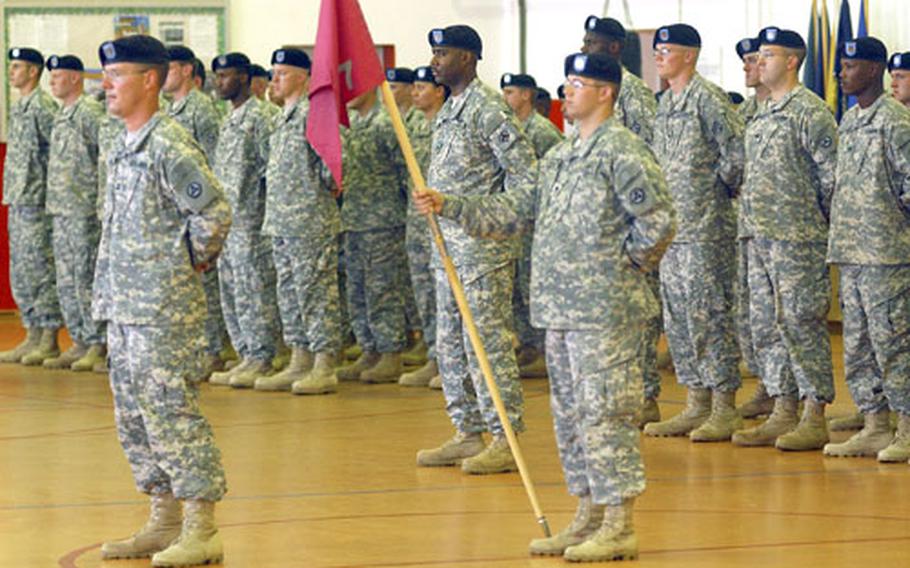 The colors of the 77th Maintenance Company are again flying in Babenhausen, Germany, after they were uncased at the unit&#39;s official welcome home ceremony on Thursday. The 77th, commanded by Capt. Alex Hunt, left, returned from Operation Iraqi Freedom in April. Holding the colors is Spc. John Weiss. (Michael Abrams / S&S) 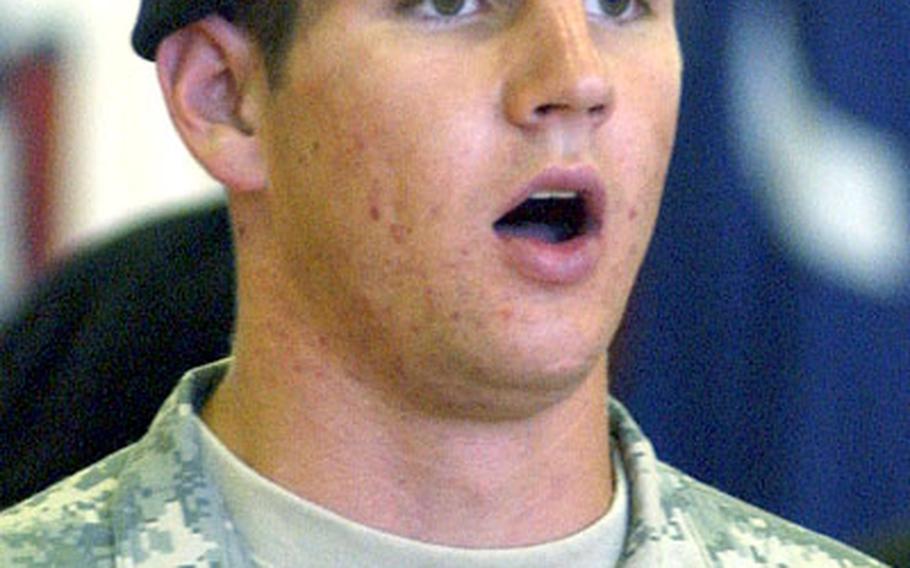 Sgt. Justin Lee of the 77th Maintenance Company sings the Army Song at the conclusion of the welcome home ceremony for the unit on Thursday. (Michael Abrams / S&S)

BABENHAUSEN, Germany &#8212; The welcome home ceremony for the 77th Maintenance Company on Wednesday could just as easily have been a going away ceremony.

After a yearlong stint in Baghdad, the unit is preparing to shut its doors for good in August.

Pfc. Anthony Verrilli, 22, from Hudson, N.H., leaves Wednesday for Fort Stewart, Ga., after a year of fixing road-worn Army trucks into the wee hours of the desert night. The work wasn&#8217;t the hard part for Verrilli, who enjoyed turning wrenches to keep the war rolling.

Verrilli and the 224 other soldiers of the 77th logged more than 4,500 work orders as they did everything from fix blown Humvee engines to put armor on Iraqi army trucks. That&#8217;s right. Three years ago, the U.S. Army was trying to blow Iraqi trucks to kingdom come; now, they&#8217;re putting armor on them to keep Iraqi troops safe.

&#8220;We didn&#8217;t think about it. They just told us to do it, and we did it,&#8221; said Spc. Jeremy Snapp, a welder who worked on some of the 100 Iraqi trucks the unit armored. He said a U.S. Army colonel came by about once a month to tell them their work was saving Iraqi lives. Snapp said it felt good to help the Iraqis.

He also armored a lot of U.S. Army ambulances, which have been targeted by insurgents in the increasingly bloodthirsty war in Iraq.

Most 77th soldiers didn&#8217;t get a firsthand look at that side of the war.

Sgt. Aubrey Weaver, 31, from Anderson, Ind., was thankful for that. He deployed to Iraq with the 77th as it took part in the 2003 invasion and lasted just 39 days in the country before a head-on collision nearly took his life.

While Weaver had a reason to be cautious, others in the unit took a more reckless approach to the deployment, volunteering to pull convoy security and quick-reaction force duties.

Sgt. Jason E. Green, 24, from Chicago, was one of those volunteers. After working as a mechanic during the 2003 deployment, he wanted to get into the action.

There was only one time he regretted the decision. Green was in his Humvee&#8217;s turret manning a .50-caliber machine gun when a roadside bomb exploded nearby. He said to himself, &#8220;Why did I want to do this?&#8221;

But he didn&#8217;t quit his volunteer gun truck duty.