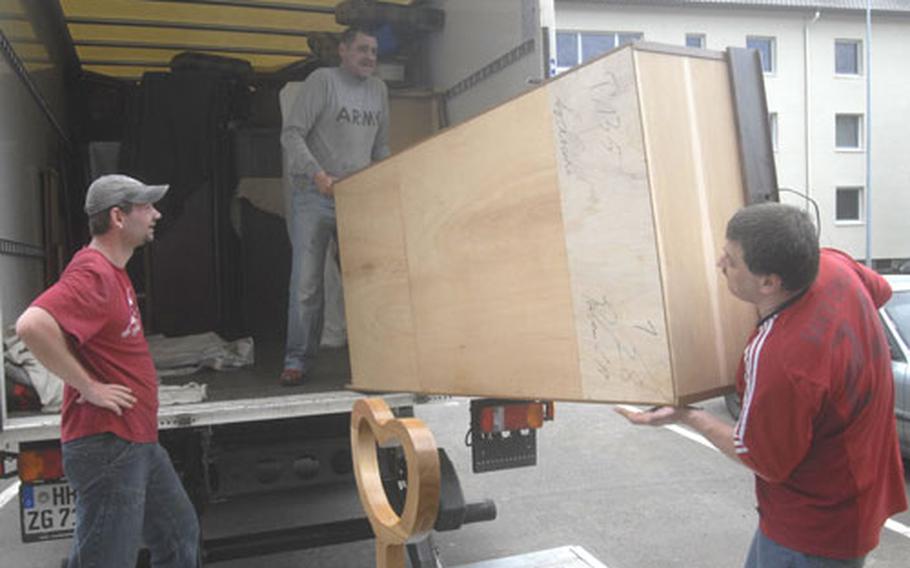 German movers Marcus Clemens, right, and Udo Kiktenko guide a piece of Army Sgt. Melisa Hall’s furniture onto a moving truck Thursday as fellow mover Mario Leonhard catches his breath. Hall is one of 77 families in housing on the Landstuhl Regional Medical Center post that are being forced to move out of eight buildings to make way for incoming reservists. (Steve Mraz / S&S)

LANDSTUHL, Germany &#8212; Nearly 80 Army and Air Force families are being forced to move out of their quarters on the Landstuhl Regional Medical Center post so mainly Navy reservists on one-year, unaccompanied tours can occupy the dwellings later this year.

With the Army&#8217;s renewed focus on families, some affected residents questioned the decision to move families out of eight buildings by Aug. 1 and move in unaccompanied troops.

Since 2002, reserve units &#8212; numbering around 350 troops &#8212; have served one-year tours at the Landstuhl medical center in support of ongoing wars. Army Reserve units first filled the &#8220;contingency augmentation mission,&#8221; but Navy Reserve units took over the task in late 2006.

After arriving, sailors started to complain about their living conditions on Vogelweh housing. The units the sailors currently reside in on Vogelweh are set for demolition. With no place to house the incoming sailors, Army Col. Brian Lein, Landstuhl commander, said he made a request to the Air Force, which controls housing, and to U.S. Army Garrison Kaiserslautern for space to house the reservists.

The decision to house the augmentees on Landstuhl was made by the garrison and the Air Force, Lein said.

With excess on-base housing in the Kaiserslautern area, Air Force policy states that excess buildings must be demolished or converted to another use. As such, Air Force housing turned over the eight affected housing buildings on Landstuhl to the Army garrison.

Of the 77 families forced to move, 35 will be relocated to other stairwell units or town homes on the medical center site. The rest will move into town homes or stairwell units on Ramstein Air Base or Vogelweh. A few families chose to move off base, but none were forced to move off base, Leonard said. Because it is a forced relocation, the government is paying for all the moves, and residents can receive a $613 partial dislocation allowance.

At a town hall meeting on April 14, few residents voiced concerns about the move. Army Lt. Col. Mechelle Hale, Kaiserslautern garrison commander, told residents to call her if they had issues, but she received very few phone calls, she said.

But Gould said she has only found one family that is happy about moving.

&#8220;The way they did it pissed most of us off,&#8221; said Gould, whose family will soon be moved to a town home on the Landstuhl medical center site.

In late March, Landstuhl residents in the eight buildings found letters taped to their doors, stating their building would begin to be converted to another use on Aug. 1.

The first town hall meeting on the issue was March 26.

&#8220;When they put the two on the balance scale, the soldiers with families lost out to the reserve augmentation,&#8221; said Army Maj. Rene Carrigan, the medical supply officer at Landstuhl.

Carrigan was offered housing on Vogelweh but has not made a decision because, as of now, the move would mean her two children would have to switch schools. As a geographically separated, dual-military servicemember, Carrigan is trying to provide as much stability for her children as she can and wants them to remain at Landstuhl schools, especially because her son is in the exceptional family member program. Also ibeing near the hospital is an issue.

Another officer being forced to move was first offered a stairwell housing unit on Vogelweh that he said was unacceptable. Hale learned that Army 1st Lt. Alan Crabtree was unsatisfied with his offer, so she called him. Housing then offered Crabtree a field-grade officer town home on Vogelweh, which he accepted earlier this week.

Hale sent an e-mail Monday to Stars and Stripes through the garrison public affairs officer that stated Crabtree was happy with his offer. In the e-mail traffic, Crabtree thanked Hale for her help.

When asked Wednesday if he was happy, Crabtree used a different adjective.

But at least one resident is happy with the move.

Army Sgt. Melisa Hall, a single mother with two children, was able to get other housing on the medical center site, which is where she works as a mental health technician. Hall&#8217;s main concern about having to move was what effect it would have on her two children, who are both in the exceptional family member program and attend day care and school on the Landstuhl post. With the move involving no change to her children&#8217;s school and day-care situation, Hall said she&#8217;s good.