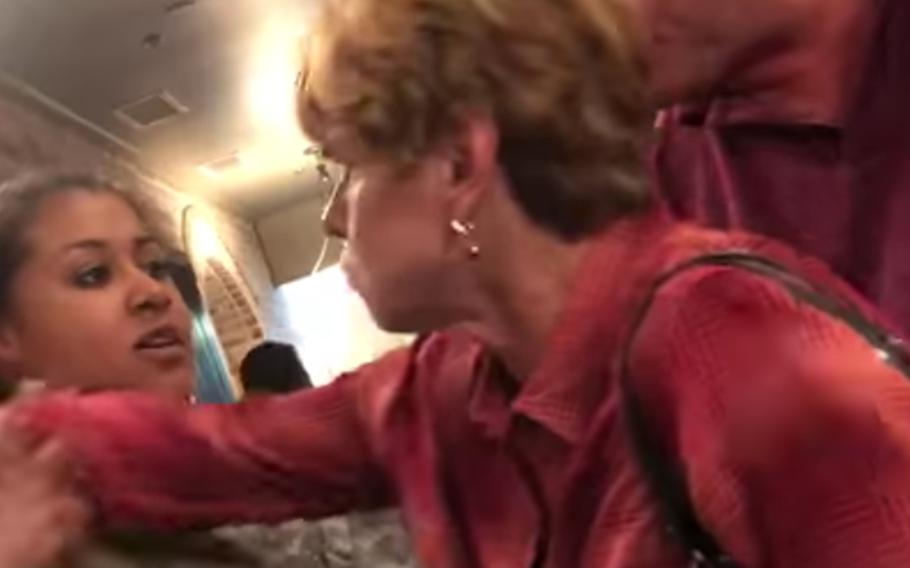 Judy Tucker is shown in a video attempting to reach past servicemember Stephanie Mitchell. (Youtube)

A 71-year-old woman was arrested after she lunged at and hit a pregnant servicemember at a Cheddar’s in Macon, Ga., police said. Videos of the Saturday incident, which police said was sparked by a disagreement over parking, have drawn millions of views as they spread across social media.

Judy Tucker was arrested on Saturday, charged with simple battery and released a few hours later on $650 bail. According to a Bibb County Sheriff’s Office report, Tucker told police that the incident with servicemembers Stephanie Mitchell and Treasure Sharpe, who are black, "all started because she was white and it was a race issue." Tucker's son approached the women when they were backing into a parking space and told them they “should learn how to park” and called them a profane name, the report quoted Mitchell as saying.

Mitchell said that, inside the restaurant, Tucker's son again called them the profane name and said that they were black lesbians.

"You were getting in our way when we were trying to park," Tucker said in one video.

The video shows Tucker attempting to get past Mitchell and take a phone away from Sharpe, who was recording her.

The incident report says Tucker “lunged and struck Mrs. Sharpe in the face” and was “at fault” and the “primary aggressor.” It said the video did not show any wrongdoing by Mitchell or Sharpe and noted that Mitchell had tried to stop the attack on Sharpe.

Cheddar's is owned by Darden Restaurants. In a written statement, a spokeswoman for Darden said, "We were appalled by the behavior of the individuals who confronted the two female servicemembers. Such behavior flies in the face of our values and those individuals are no longer welcome in our restaurant."