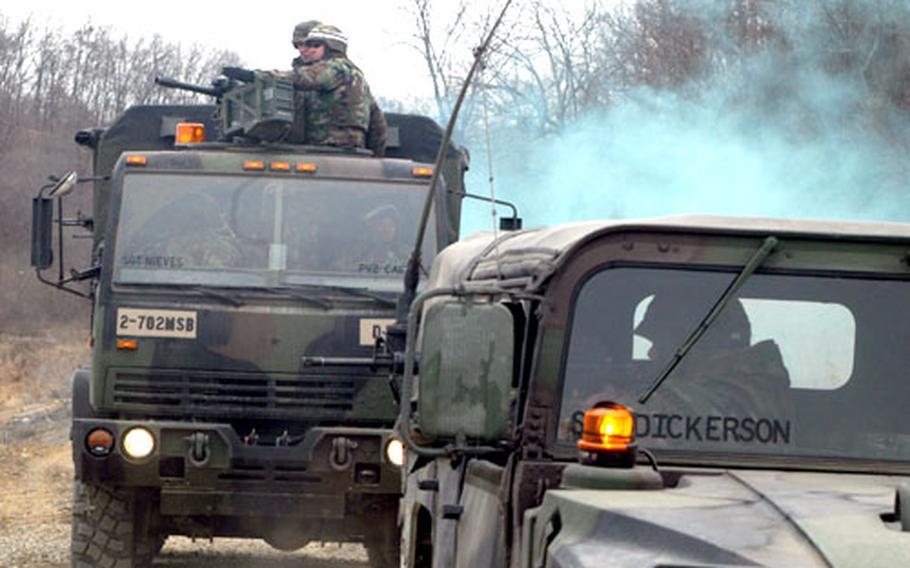 Soldiers from the 702nd Main Suppport Battalion fire at targets in response to a simulated attack on their convoy Tuesday at Storey Range. (Seth Robson / S&S) 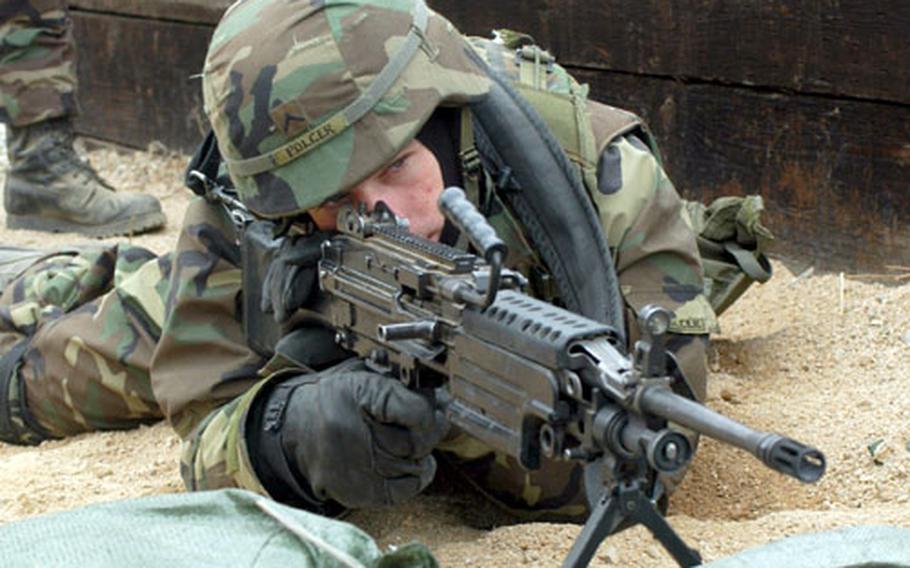 A soldier fires at targets in response to a simulated attack Tuesday at Storey Range. (Seth Robson / S&S)

&#8220;We should do this type of training at least two to three times a week,&#8221; said Spc. Abdur Khar, 24, of Hyattsville, Md., who served eight months in Baghdad last year. The only time support soldiers normally do combat training is during so-called Sergeant&#8217;s Time once a week, he said.

But this month, more than 300 soldiers from the 2nd Infantry Division&#8217;s 702nd Main Support Battalion have spent two weeks training in and around Warrior Base near the Joint Security Area and the DMZ separating North and South Korea, said the battalion&#8217;s operations officer, Capt. Matthew Linehan, 28, of Boston.

After the target practice soldiers assembled in squads to practice using radios, navigating across land by foot and reacting to contact with the enemy, he said.

The last two training days involved convoys. First the soldiers did a blank fire convoy at the Dagmar North training area that included reacting to an improvised explosive device and an ambush. The exercise culminated with live-fire training at Storey Range, Linehan said.

Another 702nd soldier, Capt. Ben Johnson, 28, of East Wenatchee, Wash., who oversaw the live-fire part of Blacksmith&#8217;s Challenge, said the goal was to teach soldiers to control fire and follow correct radio procedures.

The range included two moving vehicle targets and numerous pop-up targets the soldiers engaged with their weapons, he said.

Hartman and his soldiers hunkered down in a set of firing positions in front of their vehicles to engage the targets as range controllers threw purple smoke canisters to make the battle more realistic.

After a short firefight, the Automotive Platoon soldiers broke contact, loaded into their vehicles and drove down a road along one side of the range.

The soldiers encountered an IED on the road.

&#8220;When we halted the enemy popped up. One of my team leaders was a casualty and we called for medevac support,&#8221; Hartman said.

Khar, who served in Baghdad last year with the 1st Armored Division&#8217;s Forward Support Battalion, gave the training high marks. He experienced a real attack on a convoy to Baghdad International Airport, he said.

&#8220;There was contact on the right side and we gave suppressive fire. Everybody sped up to get out of the kill zone and nobody got hurt,&#8221; the soldier said.

The 702nd soldiers enjoyed the combat training, the Iraq veteran said, preferring it to sitting in their workshops maintaining equipment.