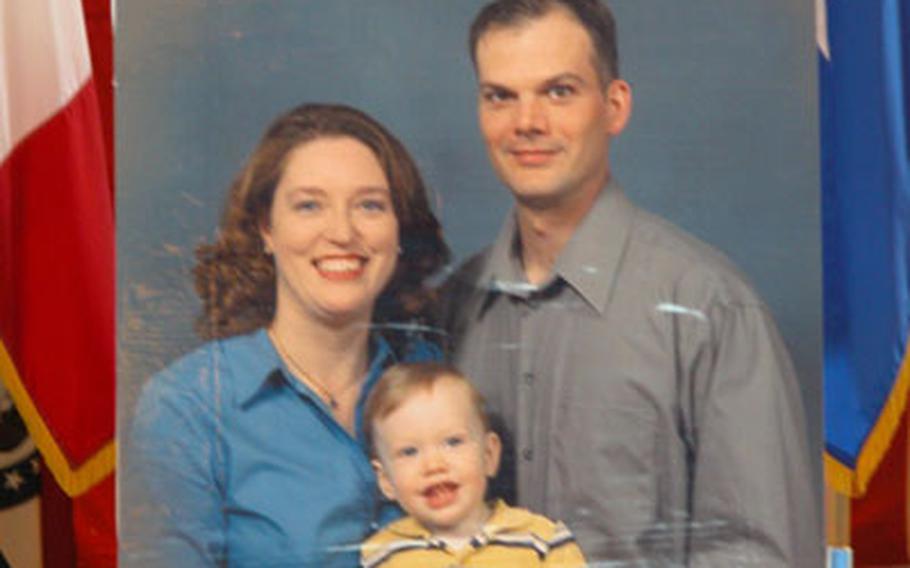 The Aviano Air Base community came out June 22, 2006, for a memorial service to remember Tech. Sgt. Michael Knight and his wife, Laura. Both were killed June 16 in a car collision on an Italian road. Laura Knight was six months pregnant. Their 3-year-old son, Alex, was injured. (Courtesy photo)

The Aviano Air Base community came out June 22, 2006, for a memorial service to remember Tech. Sgt. Michael Knight and his wife, Laura. Both were killed June 16 in a car collision on an Italian road. Laura Knight was six months pregnant. Their 3-year-old son, Alex, was injured. (Courtesy photo) 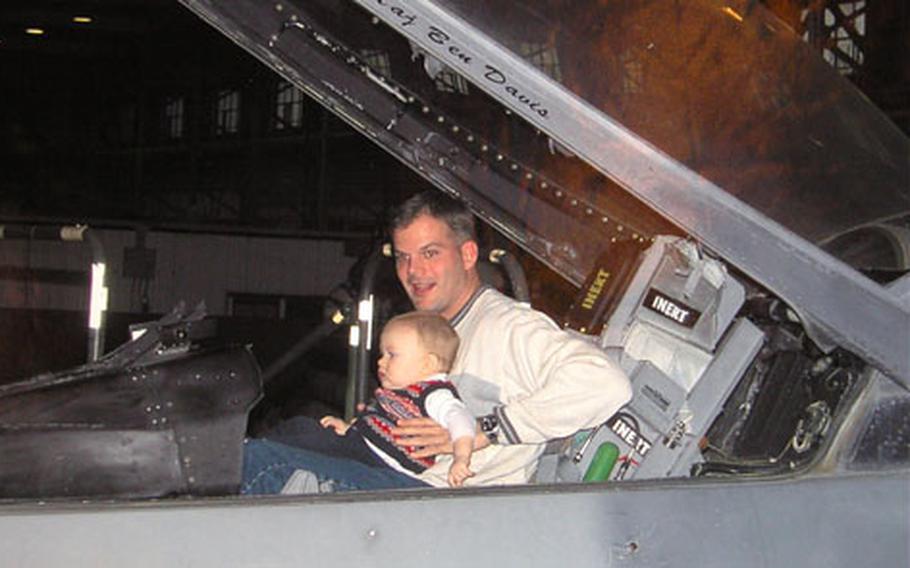 A photo of Tech. Sgt. Michael Knight with his son, Alex, inside a jet was one of those on display during a memorial service June 22, 2006, for Knight and his wife, Laura. Both were killed June 16 in a car crash on an Italian road. Laura Knight was six months pregnant. Alex was also in the car and was injured slightly. (Geoff Ziezulewicz / S&S)

Something caused Tech. Sgt. Michael Knight&#8217;s sport utility vehicle to cross the center lane and collide with a dump truck on June 16 near Aviano Air Base, Italy, killing him and his pregnant wife, Laura, but why he drifted remains unknown.

That&#8217;s the gist of an Air Force safety investigation of the incident, obtained by Stripes from the Air Force Safety Center at Kirtland Air Force Base in New Mexico.

The couple&#8217;s son, who was 3, was also in the vehicle and was slightly injured. At a memorial for the couple last summer, Brig. Gen. Robert Yates, commander of Aviano&#8217;s 31st Fighter Wing, said the boy was going to live with relatives in the States.

Citing everything from case law to Defense Department and U.S. privacy regulations and other policies, safety center director Greg Alston wrote in a letter accompanying the report last month that release of redacted information in the report &#8212; including if weather was a factor &#8212; &#8220;would have a stifling effect on the free and frank expression of ideas and opinions of Air Force officials.&#8221;

According to the report&#8217;s narrative, Michael Knight was driving his Nissan Pathfinder on Via Ungaresca near Aviano, heading toward Roveredo in Piano at about 65 mph in a zone with a speed limit of about 55 mph.

For &#8220;unknown reasons,&#8221; the vehicle drifted left and collided head-on with a dump truck full of gravel, knocking the SUV about 100 feet, the report states.

The Italian driver of the truck, who was uninjured, said he noticed Michael Knight bending down as if he were reaching for something as his vehicle crossed into oncoming traffic, according to the report.

Responding Italian medics tried to save Michael Knight&#8217;s life while he was still trapped in the vehicle, but he was pronounced dead about an hour after the collision, the report states.

Laura Knight died later at a nearby hospital.

Drugs and alcohol are not suspected to have played a part in the fatal collision, the report states, and both victims were wearing seatbelts at the time.

Knight was characterized as a safety-conscious worker by his commander, the report states, but he had also been cited twice by security forces for &#8220;failure to obey traffic signs and/or traffic instructions from officials.&#8221;

The accident came in the midst of a treacherous spate of traffic accidents involving Americans around Aviano last summer. The deaths shook the community, and hundreds of mourners attended their memorial service.

Soon after the wreck, Yates declared a &#8220;War Against Risk,&#8221; among other safety measures, to combat the surge in accidents.