6th Squadron, 6th Cavalry back in battle for Baghdad 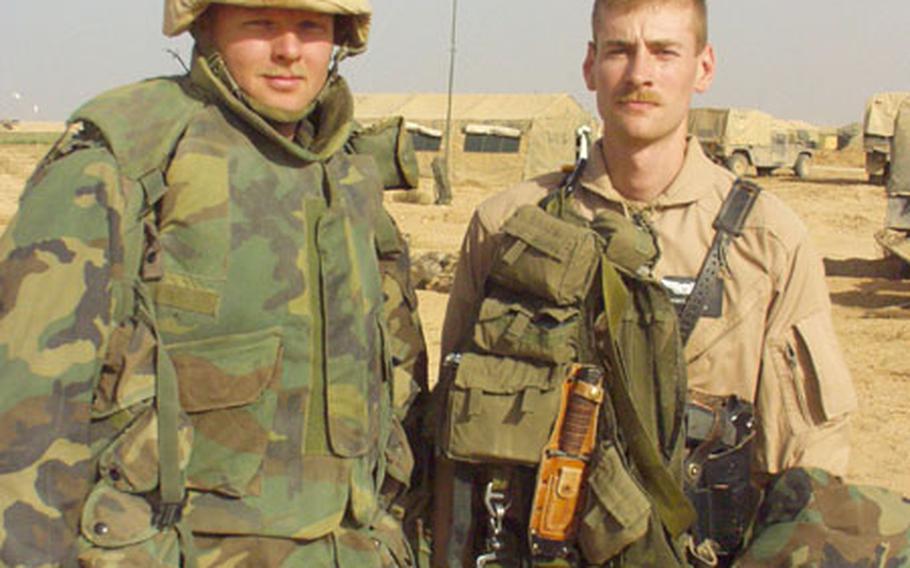 Chief Warrant Officer 2 William B. Smith, 34, of Clarksville, Tenn., (left) and 1st Lt. Nathan Schmidt, 25, of Virginia Beach, Va., scored the first kills for the 6th Squadron, 6th Cavalry Regiment on Wednesday night, wiping out a group of Iraqis who had been firing at 3rd ID positions. The unit, from Illesheim, Germany, has repaired some of its battle-damaged aircraft and is flying patrols, ready to take out Iraqi fedayeen in the 3rd Infantry Division&#39;s rear. (Steve Liewer / S&S)

U.S. ARMY AVIATION BASE CAMP, Central Iraq &#8212; Ten days after a rough first engagement, the 6th Squadron, 6th Cavalry Regiment got back in the battle for Baghdad on Wednesday.

Just after sunset Wednesday, they got a call for help from a 3rd Infantry Division ground commander.

The two flew in over the top of friendly forces just north of the Karbala Gap, about 50 miles south of the Iraqi capital, spotting six to 10 Iraqi irregulars in a grove behind a berm.

The unit&#8217;s task is to follow just behind the 3rd ID units to suppress Iraqi irregulars and protect against rear guard actions that might threaten the ground troops.

The patrol work is being shared round the clock by all of the squadron&#8217;s pilots. They flew mostly over the area southeast of Karbala on Wednesday, Barbee said, and drew little opposing fire.

The attack on the Iraqi ground forces was a big difference from the 6-6 Cavalry&#8217;s first mission on March 23, a deep-strike night attack against Republican Guard units at Al Iskandariyah, about 25 miles south of Baghdad.

The nearest friendly forces were at least 50 miles away, and Iraqi irregulars filled the air with ground fire.

Schmidt said it is far more comforting to fly with friendly troops on the ground below.

Every one of the 13 AH-64D Longbows that flew that night in March suffered battle damage, Barbee said, and none came back with fewer than six bullet holes. Four cockpits had taken rounds, as had four fuel cells.

He said 6-6 Cavalry mechanics have worked long hours to get the Longbows back in service, even during last week&#8217;s terrible sandstorm.

The 6-6 Cavalry&#8217;s sister squadron from Illesheim, the 2nd Squadron, 6th Cavalry Regiment, continued to help the 3rd ID with its assault on Baghdad.

The unit began Thursday to calculate the damage it inflicted the previous day during an assault on two bridge crossings over the Euphrates River south of Baghdad. A partial list of losses included three anti-aircraft guns, an armored personal carrier, three heavy armed trucks and several pickup trucks with gun mounts, plus several Iraqi troops fleeing in open country.

Two of the unit&#8217;s AH-64A Apaches suffered battle damage, but one was back in action Thursday. A third was put out of action when it flew too low over a lake and damaged its stabilator, the horizontal fin on at the base of the table.

While the 6-6 Cavalry flew patrols near Karbala, the 11th Aviation Regiment&#8217;s Personnel Recovery Task Force flew into action for the second time.

Under the command of the 5th Battalion, 158th Aviation Regiment from Giebelstadt, Germany, a team of Black Hawks guarded by an Apache and a Longbow searched in vain for an F/A-18 Hornet fighter from the USS Kitty Hawk and its missing pilot.