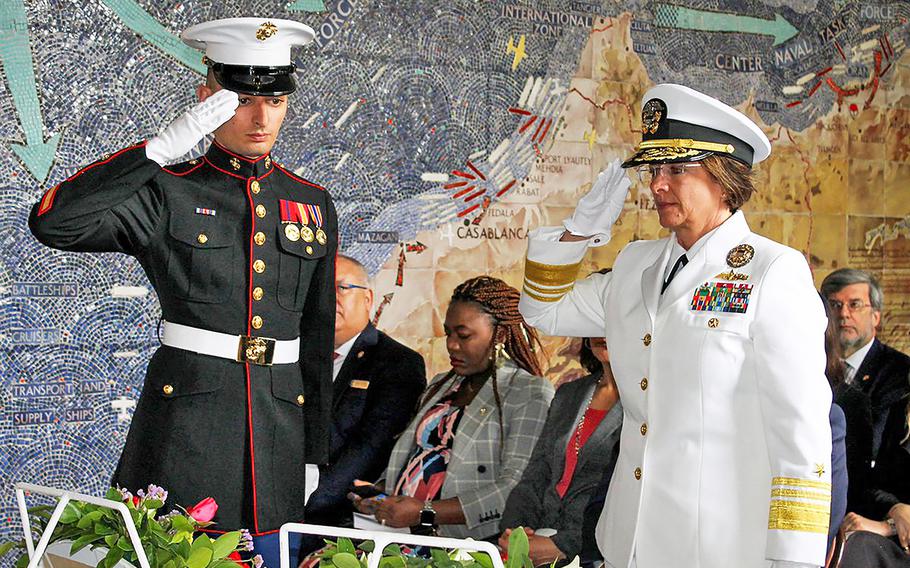 Vice Adm. Lisa Franchetti, right, lays a memorial wreath on Monday May 27, 2019 at the North Africa American Cemetery in Tunis, Tunisia where she honored the thousands of soldiers who died there during World War II. (Casey J. Hopkins/U.S. Navy)

Pvt. Nicholas Minue, 44, charged a German machine-gun nest that pinned down his company in Tunisia, killing 10 enemy soldiers and driving others from their dug out positions before he was fatally wounded.

His courageous action on April 28, 1943, inspired his company to aggressively advance and push the enemy combatants — who were part of German Field Marshal Erwin Rommel’s forces — from the sector.

He is buried at the North Africa American Cemetery in Tunisia, where a Memorial Day ceremony Monday paid tribute to him and the many others who died in Africa fighting fascism.

“We gather today to honor the memory of those who came before us, to recognize the shared sacrifice of those who served, fought, and selflessly paid the ultimate price for the freedom of others,” Vice Adm. Lisa Franchetti, the Navy’s 6th Fleet commander, told an audience gathered at the cemetery.

Franchetti was one of several Navy leaders who spoke at American military ceme-teries in Europe and Africa over the weekend. Adm. James Foggo, the Navy’s top commander in the region, spoke Monday at the Cambridge American Cemetery in the U.K.

Minue was a Polish-born immigrant who enlisted in the Army in 1927 and took a demotion to private from sergeant so he could fight overseas, Franchetti said. He is among the 2,841 U.S. servicemembers buried at the 27-acre cemetery. Another 3,724 are memorialized on a wall for those missing in action. Most died in North Africa and the Persian Gulf during the height of World War II.

The U.S. joined the British-led Allied Forces in North Africa in May 1942. The young, inexperienced American soldiers were thrown into a caldron for which they were ill-prepared, Franchetti said.

“The battles here were unexpectedly fierce for the Allies, especially the green American force that first made landfall on the coasts of Algeria and Morocco,” Franchetti said. “Many of these brave soldiers had been plucked from quaint civilian life mere months prior.”

But they rose to the challenge, and their efforts proved pivotal, she said. The Allies’ North African campaign made the Axis Powers divert troops from Europe, allowing the Red Army to gain an edge on the Eastern Front.

Tunisia is where Rommel, whose armies were depleted, retreated from Africa. The Allies’ victory there weakened the Axis Powers enough to enable an effective Allied push into southern Europe, Franchetti said.

“Both of our countries have paid a heavy price for our freedoms,” said Donald Blome, ambassador to Tunisia. “Together, we must remain committed to our ideals, our democracies, and our friendship, which protects us both.”

Franchetti also paid tribute to the four women buried at the cemetery and 18 missing in action whose names are inscribed on the wall.

One of the missing women is Pfc. Rose Puchalla, who was a seamstress and tailor from Holding, Minnesota. She and 17 other female soldiers died when their transport plane disappeared over West Africa, Franchetti said.

They were among the more than 150,000 women who served in the Women’s Army Corps during World War II, which for the first time enabled them to work in jobs besides nursing, Franchetti said, adding that it put some in harm’s way.

“These brave and patriotic pioneers paved the way for someone like me to be standing alongside you this morning, and to serve at the highest levels of our military,” Franchetti said.