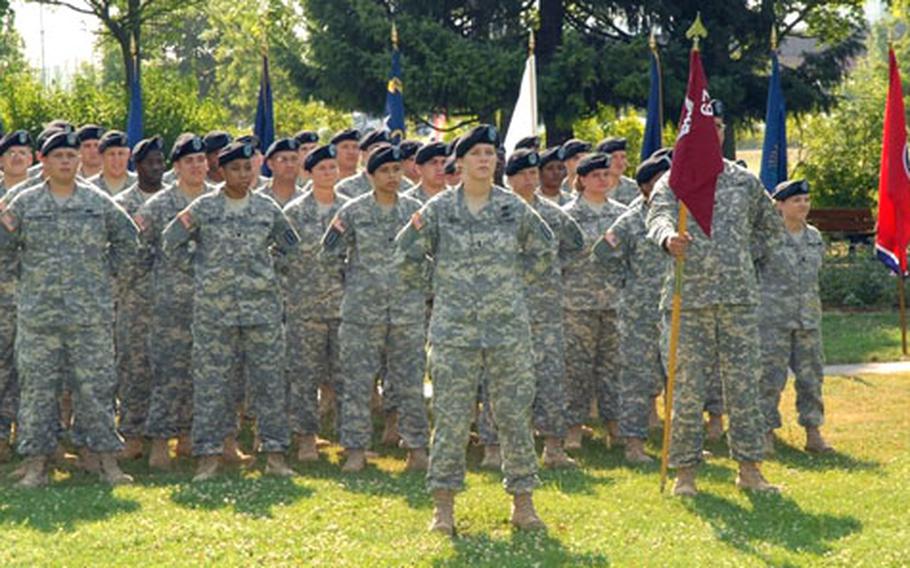 Remaining members of the 67th Combat Support Hostpital stand in formation just prior to their inactivation ceremony at Leighton Barracks in Würzburg, Germany, on Thursday, bringing to an end more than 30 years of service to the community. (Mark St.Clair / S&S)

W&#252;RZBURG, Germany &#8212; Under a blistering sun, the only forward-deployed combat support hospital in Europe cased its colors Thursday, bringing an end to more than 30 years of medical support.

Down from 397 to fewer than 100 soldiers, the 67th Combat Support Hospital doesn&#8217;t officially inactivate until Oct. 15. But during the remaining few months, soldiers still with the unit will be turning in equipment and awaiting new orders.

Originally known as Evacuation Hospital No. 67, the unit&#8217;s history goes back more than 82 years, including tours in World War II and Vietnam.

Most recently, the 67th deployed for a yearlong tour in Iraq, returning in early 2005. Elements of the unit also augmented Task Force 212th Mobile Army Surgical Hospital in Pakistan during Operation Earthquake Relief from October 2005 to February 2006.

But its primary focus was always medical readiness, and the hospital valiantly took care of the nation&#8217;s wounded and cared for injured locals until the inactivation order came, said Brig. Gen. Carla G. Hawley-Bowland, the ceremony&#8217;s reviewing officer.

While simultaneously supporting medical activities for the W&#252;rzburg community, the 67th moved $34 million worth of medical equipment, 150 vehicles and 75 percent of its personnel to new homes over the last year. &#8220;I could not have been prouder of being involved with the only combat support hospital in Europe,&#8221; said Col. Mark H. Bither, last commander of the 67th.