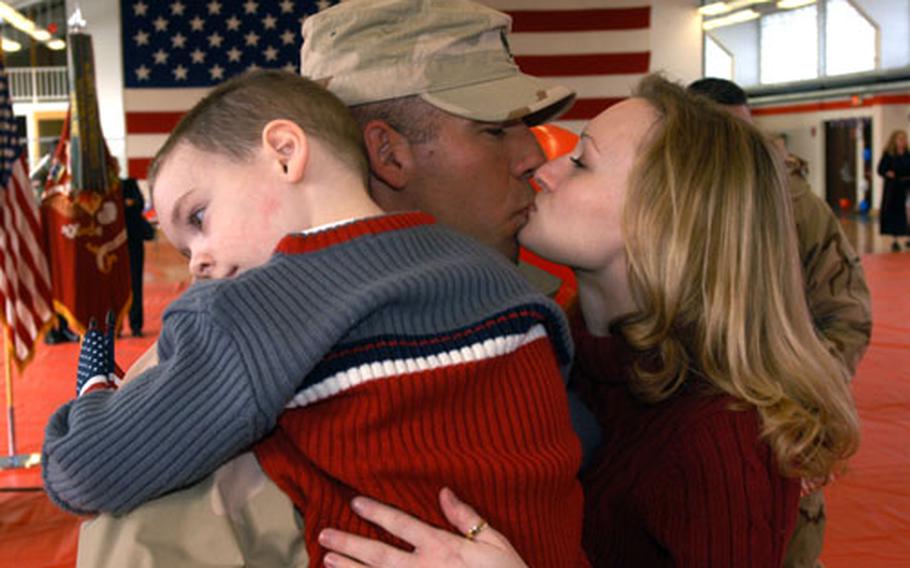 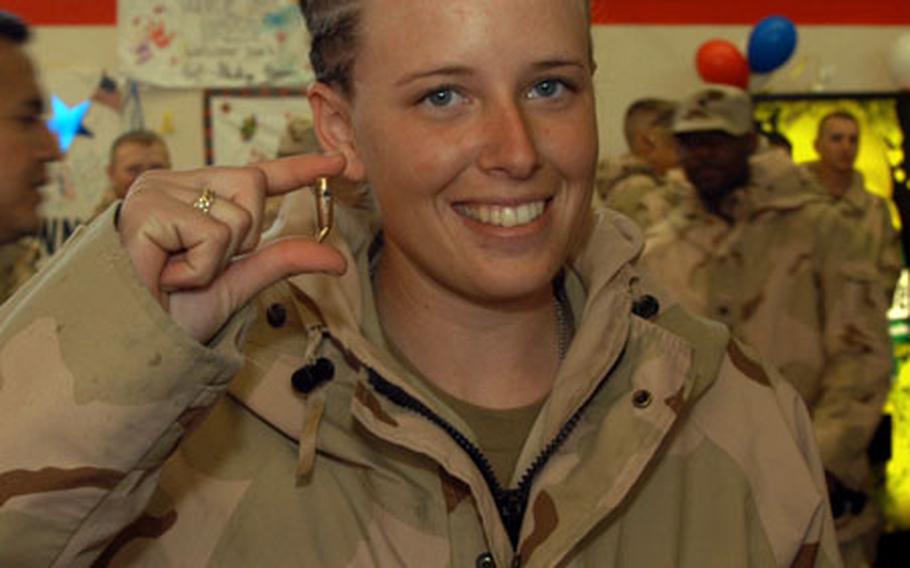 Spc. Whitney Shaw, 19, of Tampa, Fla., holds a bullet, fired from an AK-47, that hit her in the right shoulder on Aug. 4 while she drove a tractor trailer through an ambush in Mosul, Iraq. (Russ Rizzo / S&S)

Shaw, a member of the 66th Transportation Company that returned from Iraq on Friday, carries the memento on a silver chain.

The brass bullet, fired from an AK-47, hit Shaw&#8217;s left shoulder while she drove a tractor-trailer through an insurgent ambush in Mosul last year.

Her body armor stopped the bullet, leaving Shaw bruised and the bullet bent at the tip.

Insurgent attacks were a daily reality for the 142 members of the 66th Transportation Company who returned after more than a year in Iraq.

In December, family members in Germany were told the unit&#8217;s deployment would be extended for five weeks so the company could bolster U.S. forces for Iraq&#8217;s Jan. 30 election.

On Wednesday morning, the soldiers returned to a gym full of loved ones at Kleber Casern.

Stationed in Tikrit, the soldiers drove supplies as far north as the Syria-Turkey border and as far south as Umm Qasr, near the Kuwait border, with many stops in between.

In 13 months, two soldiers from the company were killed and 12 others were injured, said Capt. Samuel Pena, the company&#8217;s commander. Sgt. Tatjana Reed, 34, and Spc. Torey J. Dantzler, 22, died July 22 when a roadside bomb destroyed their armored Humvee in Samarra.

On Aug. 4, 66th Transportation Company soldiers came under the heaviest attack of the year as they drove through Mosul.

Insurgents choked off a main route through Mosul and engaged members of the Stryker Brigade in a firefight when the 66th Transportation Company&#8217;s convoy rolled through.

The bullet that hit Shaw came through an open passenger window.

Drivers kept their windows open because there was no air conditioning in the trucks, Shaw said. Besides, leaving them up would do little to protect them: The tractor-trailers had no bulletproof glass.

At the start of the war, the Army had not planned to armor its tractor-trailers, Pena said. But plans changed when insurgents began using larger roadside bombs and detonating them more often, he said.

All of the company&#8217;s trucks were armored by the end of August, eight months after the company arrived in Iraq, Pena said. The trucks still have no bulletproof glass, he said.