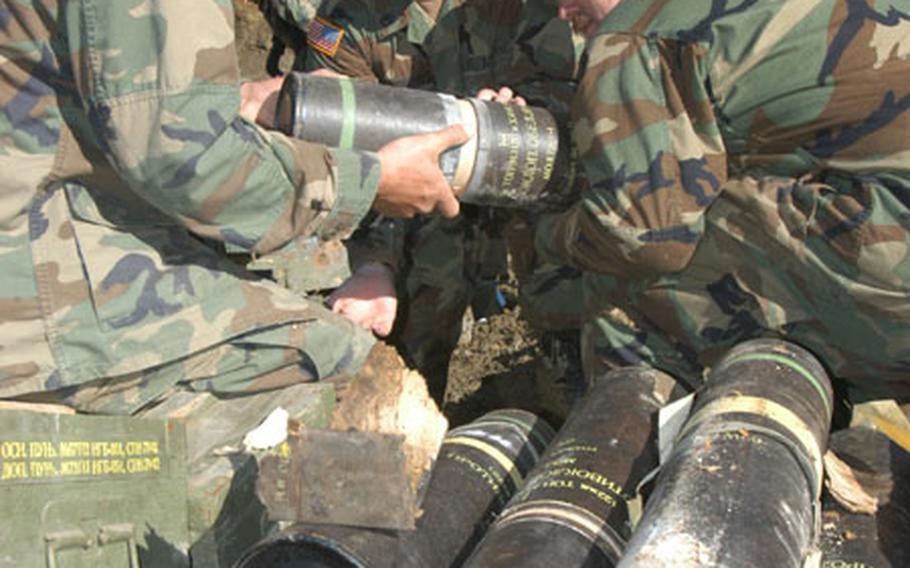 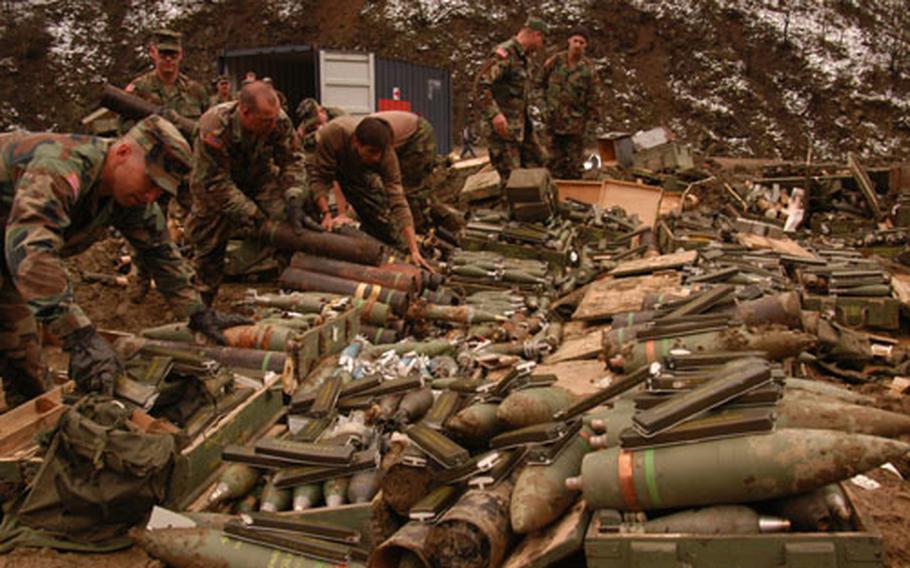 U.S. soldiers layer ammunitions and C-4 explosives so that they can be destroyed in a big explosion on Thursday at Velika Ribnica demolition range in Bosnia and Herzegovina. The munitions come from Bosnian weapons storage sites that have been closed as part of the Bosnian armed forces reductions. The range is the only one in multinational Brigade North that is remote enough from local communities to permit large amounts of ammunition to be destroyed. (Ivana Avramovic / S&S) 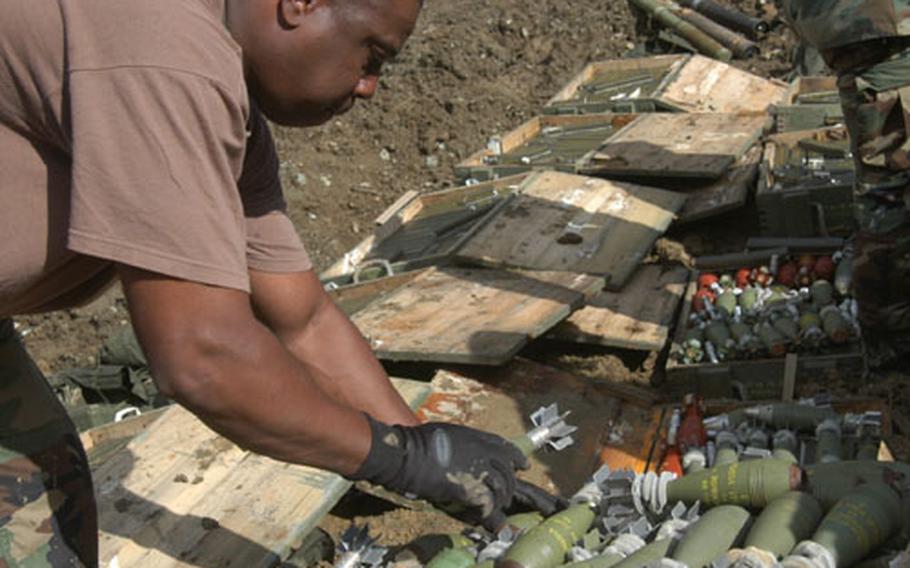 Sgt. Harold Thompson of the 666th Explosive Ordinance Detachment layers rounds to be destroyed on Thursday at Velika Ribnica demolition range in Bosnia and Herzegovina. Thompson&#39;s unit has been busy working at the demolition site, destroying large amounts of munitions that came from a number of Bosnian armed forces weapons storage sites were closed. With a limited number of EOD troops, soldiers from other units have been volunteering to help out. (Ivana Avramovic / S&S)

Members of the 666th Explosive Ordnance Detachment from Jacksonville, Ala., assisted by engineers and infantry troops from other units, have been destroying munitions from Bosnian armed forces storage sites that have been closed down as part of ongoing forces reductions.

Since they arrived in mid-August, EOD technicians have been spending every other week at the Velika Ribnica demolition range building piles of ammunition, laying C-4 explosives over them and blowing it all up.

Every week, they get from five to seven shipping containers full of munitions that need to be destroyed. So far, they have destroyed about 100,000 pounds of explosives.

The range is the only one in the Multinational Brigade North where large amounts of ammunitions &#8212; up to 1,500 pounds &#8212; can be destroyed. It is far enough from residential areas, and workers from a nearby rock quarry know to stay away before the blast.

On Thursday, the EOD crew was back at the demolition range, and among those assisting them were Sgt. Gill Anderson of the 147th Finance Battalion, a Guard unit from Roseville, Minn.

Anderson, who normally works at the cashier&#8217;s desk of the finance office at Eagle Base, joined in moving the munitions because, she said, she wanted to see more than just her base and whatever she could see of the country when driving to another base.

The range looked like an anthill with all the soldiers moving around as the thermometer slowly climbed from below freezing. The temperatures did little, however, to solidify the mashed potato-like mud the soldiers had to work in.

&#8220;If I was a kid, this would be awesome,&#8221; said Staff Sgt. Kevin Howard of Company B, 2nd Battalion, 136th Infantry Regiment as a couple of fellow soldiers pulled him out of ankle-deep mud that immobilized him.

Still, the troops made great progress. Lightning the day before prevented them from getting any work done.

Soldiers teamed up to remove 122 mm armor-piercing artillery rounds from the tubes they were stored in.

The previous rotation, SFOR 13, had started the destruction of weapons from closed weapons storage sites. The number of sites in MNB North is expected to be reduced from 31 to nine, Dickinson said.

Since Hayes joined the unit in 1994, there has only been one other demolition on scale with Thursday&#8217;s blast.