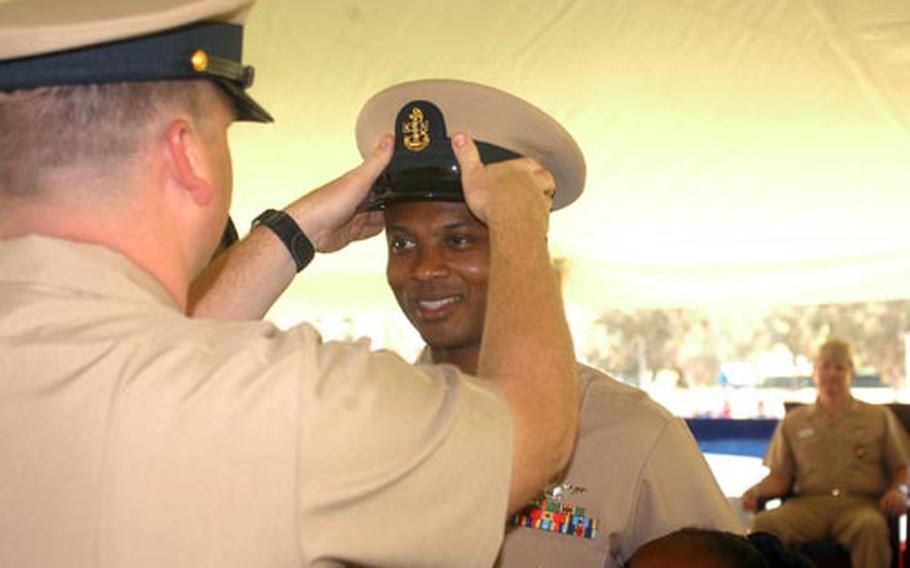 Newly promoted Chief Petty Officer Duane Daugherty receives his hat after having his anchors pinned to his collar, during the pinning ceremony in Naples, Italy, on Tuesday. (Lisa M. Novak / S&S)

Newly promoted Chief Petty Officer Duane Daugherty receives his hat after having his anchors pinned to his collar, during the pinning ceremony in Naples, Italy, on Tuesday. (Lisa M. Novak / S&S) 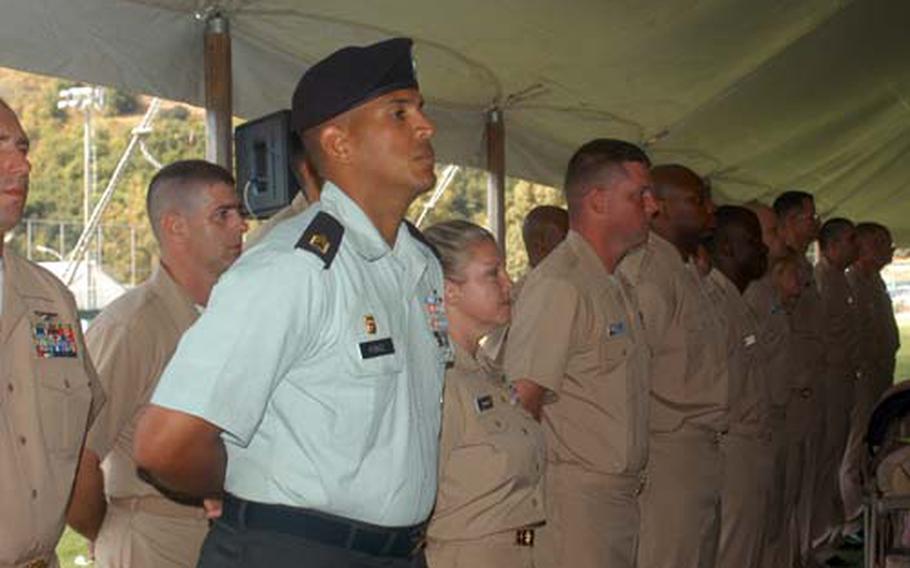 NAPLES, Italy &#8212; They&#8217;ve been selected, they&#8217;ve been trained, and on Tuesday the Navy&#8217;s newest chief petty officers had their anchors pinned on their collars in ceremonies held all over the world, on land and at sea.

In Naples, hundreds of guests including family, friends, retired chiefs and co-workers gathered in Carney Park to watch the pinning ceremony for the 25 Naples-area servicemembers selected for promotion.

"No other service in the world conducts a service such as this, or bestows upon their E-7s the level of responsibility we do," said Rear Adm. Gerald Beaman, deputy chief of staff operations for the NATO command in Naples and guest speaker for the ceremony.

In all, 66 sailors were promoted to chief petty officer throughout Europe.

For newly pinned Chief Petty Officer Vincent Morales, an electronics technician who joined the Navy in 2000, the ceremony represented a goal he didn&#8217;t think he&#8217;d reach this soon.

"This is all a bit overwhelming," Morales said. "I feel like a better man, like a new person."

The ceremony is usually held once a year, in mid-September, after about six weeks of training.

For many, like Romeo Rojo, bachelor housing director in Naples, the experience lasts a lifetime.

"I&#8217;ve attended every pinning ceremony since my own back in 1971," said Rojo, who served in the Navy from 1960 to 1984. "For me, it&#8217;s a very special time. I am so passionate about this because you get to watch the transformation from being just another sailor to someone everyone looks up to. It&#8217;s a very emotional experience."