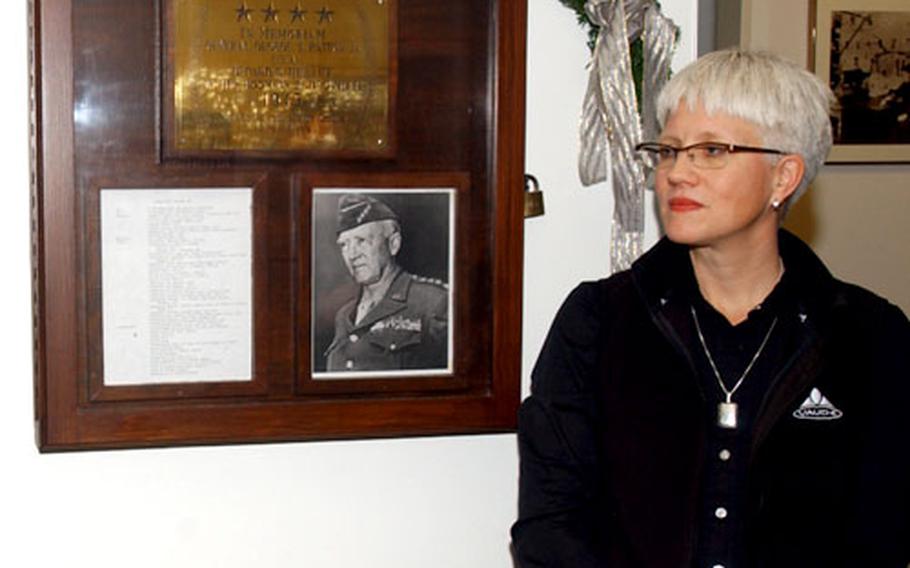 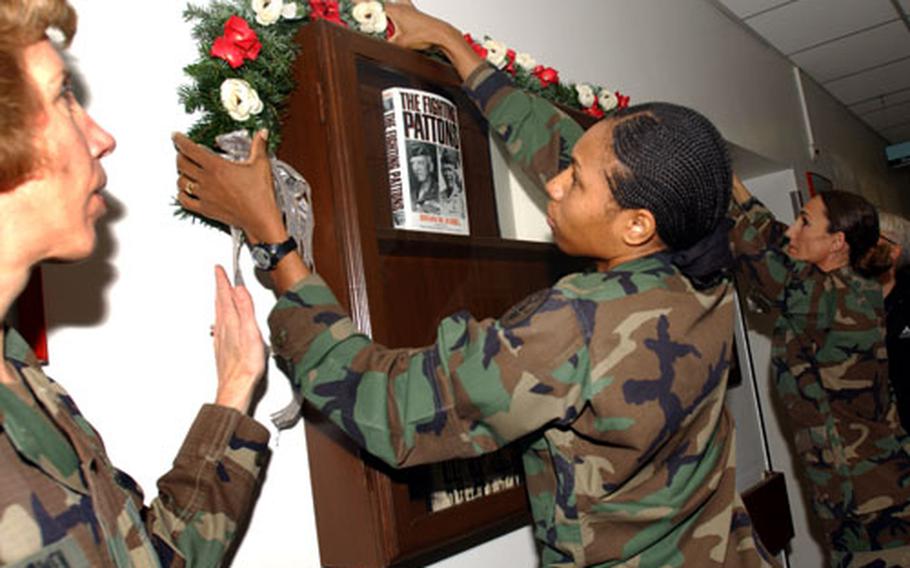 Helen Patton Plusczyk, Patton&#8217;s granddaughter, stood outside what is now the radiology department, but which 60 years ago Wednesday, was the room where &#8220;Old Blood and Guts&#8221; died from a pulmonary embolism following a car crash 12 days earlier.

She did an impersonation of the general demonstrating that his voice was high, nothing like George C. Scott&#8217;s, thanked the staff and helped lay a wreath outside the room.

But because this was the 60th anniversary of Patton&#8217;s death at the hospital, Plusczyk was joined by, among others, the top internist from Wm. Beaumont Army Medical Center in El Paso, Texas, who was so interested in Patton&#8217;s life and death that he reviewed his hospital medical records and now gives talks on the matter; and a United Service Organizations tour lead by an off-duty U.S. Army Europe historian. The tour group also visited the site of Patton&#8217;s funeral and scene of the accident between Patton&#8217;s sedan and an Army 2&#189;-ton truck in Mann- heim, near Benjamin Franklin Village.

Patton&#8217;s place in history by the time he was brought to the hospital was assured: He was a military visionary who, among other accomplishments, led the Third Army through the most impressive advance of World War II.

But if he had not lain paralyzed for 12 days in Heidelberg&#8217;s hospital before he had died, he might have been remembered quite differently, said Col. Thomas Frank, chief of internal medicine at Wm. Beaumont.

During that time, Patton&#8217;s courage, canniness and bravado were recalled in newspaper stories as part of &#8220;a national upswelling of sympathy,&#8221; Frank said, quoting from a book about Patton during his talk on the hospital compound.

The general&#8217;s missteps, which on some occasions had resulted in his reassignment and had turned public opinion against him &#8212; slapping a shell-shocked soldier he regarded as a malingerer, criticizing Russian and other Allies, saying Nazis were like any other political party on the losing side &#8212; were forgotten, or at least were remembered less prominently.

Frank said modern medications could have prevented the pulmonary embolism &#8212; a blood clot that traveled to the lungs &#8212; that killed the war hero. But, Frank said, had Patton lived, he would have remained paralyzed.

Military police faulted both Patton&#8217;s driver and the soldier driving the truck for the collision. But Patton insisted that no charges be brought against either and that they not feel guilt over the accident.

&#8220;The long and short of it is, he probably went when he was supposed to go,&#8221; said his granddaughter, a 43-year-old actress who lives near Saarbr&#252;cken and is married to a German she met while a Defense Department entertainer.