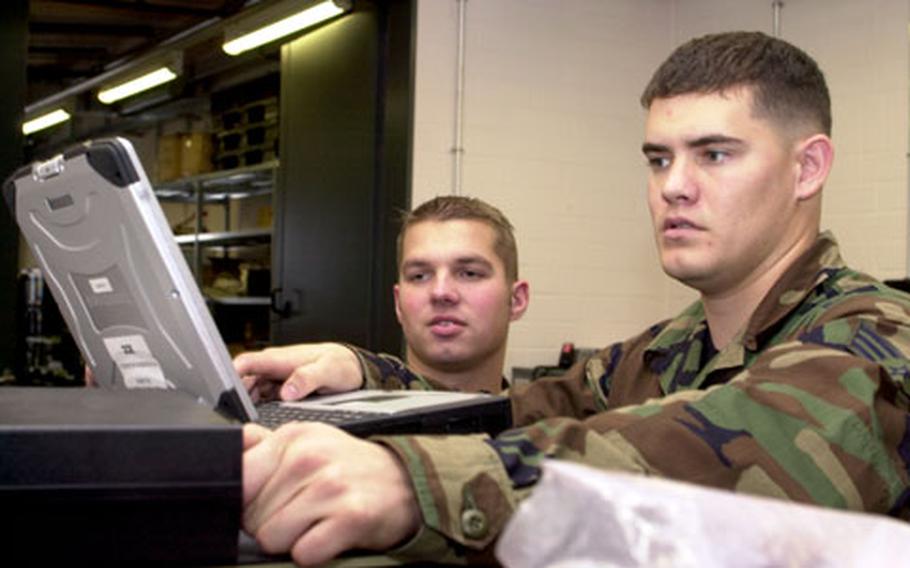 SPANGDAHLEM AIR BASE, Germany &#8212; When troops on the ground come under fire, they often call for help from the skies above.

Whether soldiers or Marines are in a firefight in Iraq or ambushed in Afghanistan, a fighter jet loaded with weapons can quickly help turn the tide in favor of U.S. forces on the ground. But that air support usually doesn&#8217;t arrive without the help of a little-known unit called an Air Force air control squadron.

From trailers either on a major base or in a secret location in a muddy field, the squadrons control air traffic above the combat zone and can help direct planes to fuel or hot spots.

In some regards, the squadron members can serve as 911 emergency dispatchers for ground troops.

Jobs within the squadrons are not the most glamorous because of the heavy number of deployments, and members are deployed often across the globe. But it is rewarding to airmen such as Chief Master Sgt. Michael McElligott because the units are relatively small and often operate independently in the field.

&#8220;A lot of people with background in units like this will reflect on their career and they will know that they made a difference in the success of a unit &#8230;,&#8221; McElligott said. &#8220;Other places I have been, I contribute, but it&#8217;s not quite so obvious how significant my impact is. &#8230; People have to commit very fully to a role in a unit like this versus communications for the base.&#8221;

While the Air Force nearly eliminated the units, the squadrons have found a critical role in Iraq. Air control squadrons provide what they call the &#8220;air picture,&#8221; tracking everything flying in the sky within the range of their mammoth radars and information cobbled from surveillance planes and other systems.

Most of their mission entails making sure military and commercial aircraft paths don&#8217;t run into each other and directing planes to tankers so they can get fuel. But in Iraq, they often help divert pilots to ground troops in trouble.

During the squadron&#8217;s deployment to Balad Air Base in Iraq last year, the unit was involved in 213 situations in which ground troops needed help from aircraft. Sometimes that meant an F-16 dropping a bomb. Other times it meant an aircraft simply flying over the area as a bold show of force to insurgents.

Squadron members work from mobile command units that are much like trailers stuffed with high-tech communication gear. The airmen can work 16-hour shifts on a deployment, watching computer monitors around the clock to provide support whenever needed and communicate using radios and secured computer chat software. During the Iraq deployment, the squadron&#8217;s weapons section controlled 2,500 combat missions in addition to orchestrating the offload of 5.6 million pounds of fuel.

What makes the squadron unusual is that it needs little support from anyone else to get up and running. Members do their own security and transport and build their camps themselves much like a self-contained Mobile Army Surgical Hospital, or MASH. Most people in the unit do several different jobs during a deployment.

&#8220;Anything we want, anything we need, we take with us,&#8221; said Senior Master Sgt. Jim Schulz, superintendent of mission support flight.

During an exercise in the Netherlands earlier this year, they took a caravan of 88 vehicles to transport their gear and people.

The squadron &#8212; with more than 260 people &#8212; is getting ready to return to Iraq next month, making it the second deployment within a year. Although frequent deployments can be hard on families, many people in the squadron understand the importance of their job.