603rd honors its fallen in ceremony at Aviano 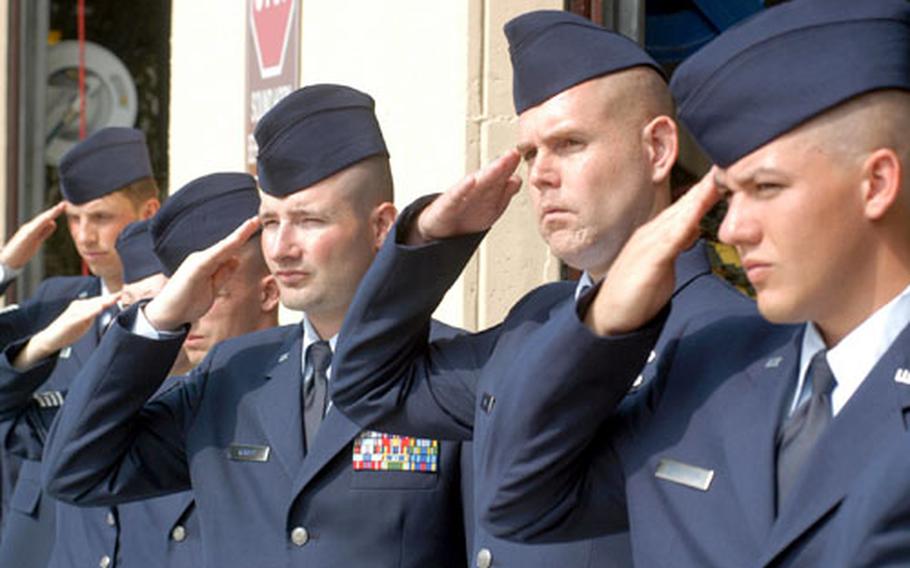 Airmen with the 603rd Air Control Squadron offer salute during a ceremony Friday to remember the five unit members who have died since the squadron moved to Aviano in 1994. (Kent Harris / S&S)

Airmen with the 603rd Air Control Squadron offer salute during a ceremony Friday to remember the five unit members who have died since the squadron moved to Aviano in 1994. (Kent Harris / S&S) 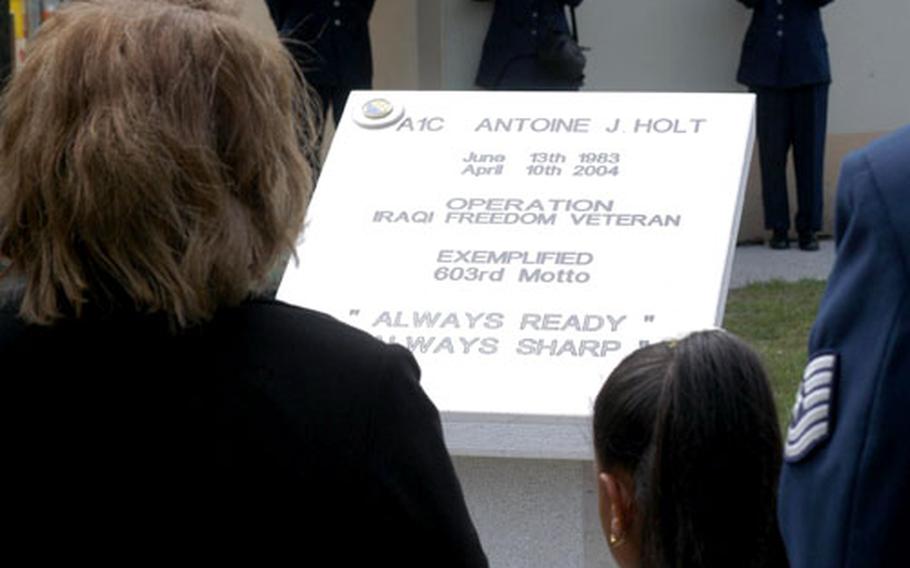 Courtney Garmon looks at the memorial plaque dedicated to her son, Airman 1st Class Antoine Holt, just after it was unveiled Friday in a ceremony at Aviano Air Base. Holt, a member of the 603rd Air Control Squadron, was killed in a mortar attack in Iraq in April, 2004. (Kent Harris / S&S)

AVIANO AIR BASE, Italy &#8212; Memorial Day came a little more than a week early for the 603rd Air Control Squadron.

The unit, known as the Scorpions, invited the rest of the base population to join them in remembering five airmen from the squadron who died since the 603rd came to Aviano in 1994.

Among them was Airman 1st Class Antoine Holt, who was killed in April 2004 during a mortar attack at Balad Air Base, Iraq. Holt is the only airman assigned to Aviano who has died in Iraq or Afghanistan.

Holt&#8217;s mother, Courtney Garmon, sister and stepfather flew from the States to attend the event.

Several other airmen who were with Holt when he died attended the ceremony. Scott Palomino, a senior airman who lost his left leg below the knee, visited the base for the first time since deploying to Iraq.

&#8220;I was a little nervous about coming back,&#8221; said Palomino, who left the Air Force and is attending college. &#8220;But walking around the base and seeing people has really brought back some memories.&#8221;

Several airmen shared their memories of Holt, a popular young airmen who was killed while sleeping in his tent.

Lt. Col. Jennifer Spears, the squadron commander, said the ceremony and open house were held both to remember the five fallen airmen and to help those still in the squadron gain some closure.

The other four airmen from the 603rd died in noncombat situations. There were:

Senior Airman Christopher Croft was killed in June 1994 while riding his bicycle to the base.

Staff Sgt. Ricardo Duran died in an asthma attack in November 2005 shortly after leaving the squadron.

Two soldiers assigned to Aviano also have died in Iraq.