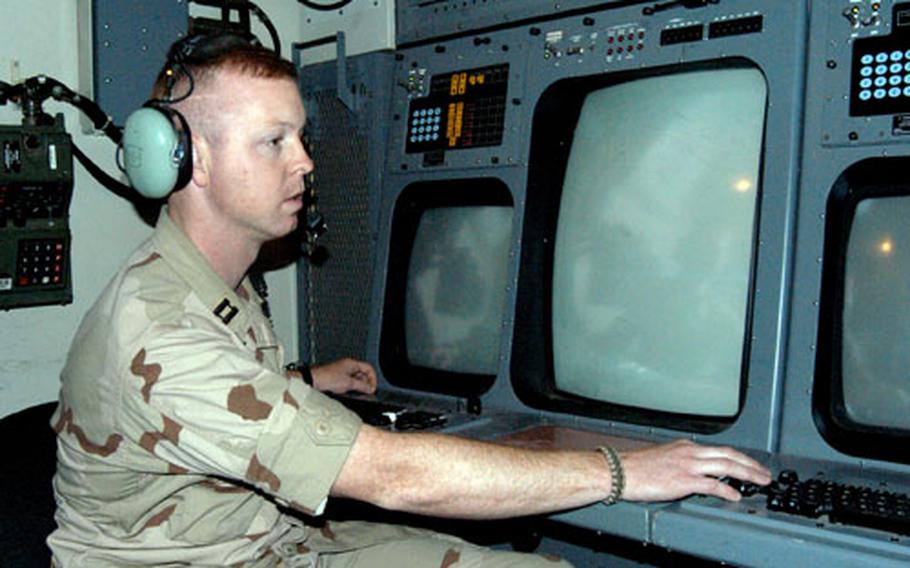 Capt. Eric Figueriedo, a member of the 322nd Expeditionary Air Control Squadron, sits inside an operations module while deployed to Balad Air Base in Iraq in 2004. (Michael Abrams / S&S file photo)

Capt. Eric Figueriedo, a member of the 322nd Expeditionary Air Control Squadron, sits inside an operations module while deployed to Balad Air Base in Iraq in 2004. (Michael Abrams / S&S file photo) The 603rd Air Control Squadron maintains several operation modules — each weighing in at more than 8 tons — that are tied to a large satellite dish with a range of 240 miles. (Michael Abrams / S&S file photo)

Since 2003, unit members have deployed to either Afghanistan or Iraq for part of each year. This time the unit, departing this month, is expected to be in Afghanistan for the next eight months.

The 603rd is one of only five such active-duty squadrons. It is joined by the 606th Air Control Squadron at Spangdahlem Air Base in Germany; the 726th from Mountain Home Air Force Base, Idaho; the 728th at Eglin Air Force Base, Fla.; and the 729th at Hill Air Force Base in Utah.

Because there are so few units in the field, and because their services are in demand in places such as Afghanistan and Iraq, there always seems to be a deployment on the calendar.

The 603rd, known as the Scorpions, spent seven months in Iraq from November 2003 to June 2004, setting up operations first at Baghdad International Airport, before moving (via their own convoys) to Balad. More than 100 airmen endured about 200 rocket and mortar attacks on their bases during that span. Airman 1st Class Antoine Holt was killed in one of them on April 10, 2004.

About a year later, 80 or so Scorpions were sent to Kandahar airfield in Afghanistan to begin an eight-month deployment for the unit. That time, most airmen were replaced about halfway through the tour with another set of troops from their squadron, making the tour more along the lines of a typical four-month Air Force deployment downrange. The last of the airmen returned to Aviano in January 2006.

Staff Sgt. John Corley served with the 603rd in both Iraq and Afghanistan and will be headed back down later this year.

Much of the 603rd&#8217;s mission involves a radar system that monitors the airspace for about 240 miles in all directions, plus communication equipment that allows it to stay in touch with various elements engaged in ongoing operations.

The squadron is capable of packing up its equipment &#8212; some of which weighs in excess of 8 tons &#8212; and moving to another spot as it did in Iraq.

Larson said the 603rd has airmen in 24 career fields and is designed to operate on its own for short periods of time. At Aviano, it has more than 180 trucks and 60 generators.

Sticking with Air Force policy, squadron members declined to talk much about their upcoming mission, but say they expect it will be similar to their last deployment to Afghanistan.

AVIANO AIR BASE, Italy &#8212; Getting a parking spot in front of the base exchange/commissary complex should be a lot simpler in the next few weeks. And not just because the holiday shopping season is over.

Aviano will contribute about 800 airmen to the Air and Expeditionary Force 5/6 rotation that starts this month &#8212; a bit less than 20 percent of the base&#8217;s active-duty population.

The biggest chunk of airmen, about 40 percent, are based with or temporarily assigned to the 510th Fighter Squadron, Yates said. The Buzzards&#8217; sister squadron at Aviano, the 555th, is a part of the following four-month rotation.

Yates said he doesn&#8217;t think base operations will suffer due to advanced planning and the occasional extra-duty assignments for those still at Aviano. Reserve elements and special civilian hires also historically help fill in gaps.

The AEF system breaks down into five four-month rotations for most airmen. Airmen are generally assigned to a specific rotation and can be deployed during that time frame. Most know if they are going and others are put on standby in case they are needed.

In most cases, those deploying knew if they were going to deploy months ago.