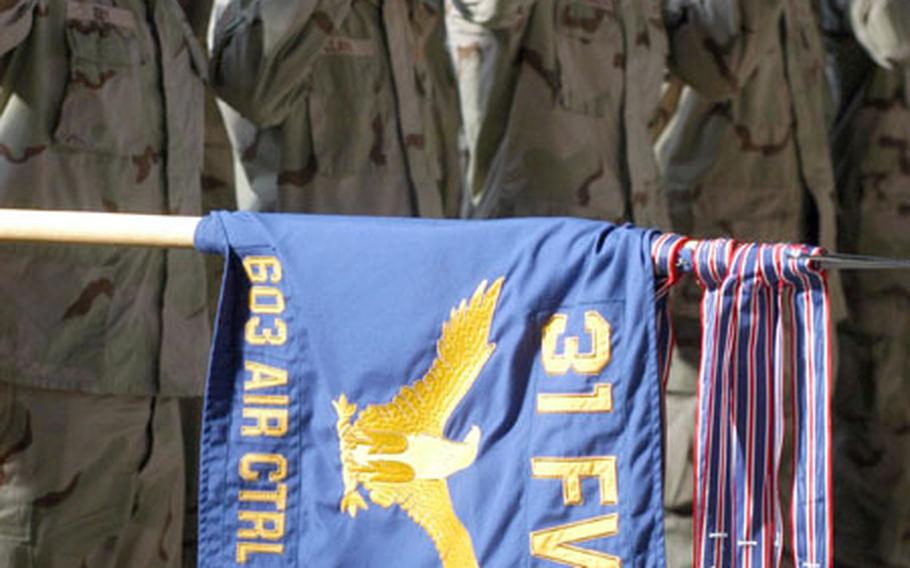 Members of the 603rd Air Control Squadron salute during the playing of the national anthem at a ceremony Thursday welcoming them back to Aviano Air Base from a six-month deployment to Iraq. (Kent Harris / S&S)

Members of the 603rd Air Control Squadron salute during the playing of the national anthem at a ceremony Thursday welcoming them back to Aviano Air Base from a six-month deployment to Iraq. (Kent Harris / S&S) Families and community members cheer the return of the 603rd Air Control Squadron to Aviano Air Base on Thursday. Hangar 1 was crowded with family members and active-duty personnel eager to see the airmen return to their home base from a six-month deployment in Iraq. (Kent Harris / S&S)

After more than six months in Iraq, more than 100 members of the 603rd Air Control Squadron, known as the &#8220;Scorpions,&#8221; returned to an enthusiastic welcome Thursday at their home base.

Many couldn&#8217;t lift their hands, though, because they were wrapped in hugs around spouses or holding kids. Or both.

Shannon Newberry didn&#8217;t have to be reminded about the kids.

The deployment wasn&#8217;t an easy one, either. The unit was first sent to Baghdad International Airport, then moved to Balad Air Base to set up operations there. Along the way, they served twice the time in theater that most airmen do.

Not all the Scorpions made the flight back. Airman 1st Class Antoine Holt was killed in a mortar attack in Balad on April 9. Two others were seriously wounded.

Brig. Gen. Mike Worden, the 31st Fighter Wing commander, and Lt. Gen. Arthur Lichte, the U.S. Air Forces in Europe vice commander, were on hand for the return. Both had words of praise for the airmen.

Thursday&#8217;s return isn&#8217;t the only one scheduled this week at Aviano. Members of the 555th Fighter Squadron, also deployed to southwest Asia, are set to come back this weekend.

Most of the deployed Scorpions will now get two weeks off before they resume their duties at Aviano. Apparently not all of them got enough sand, though.