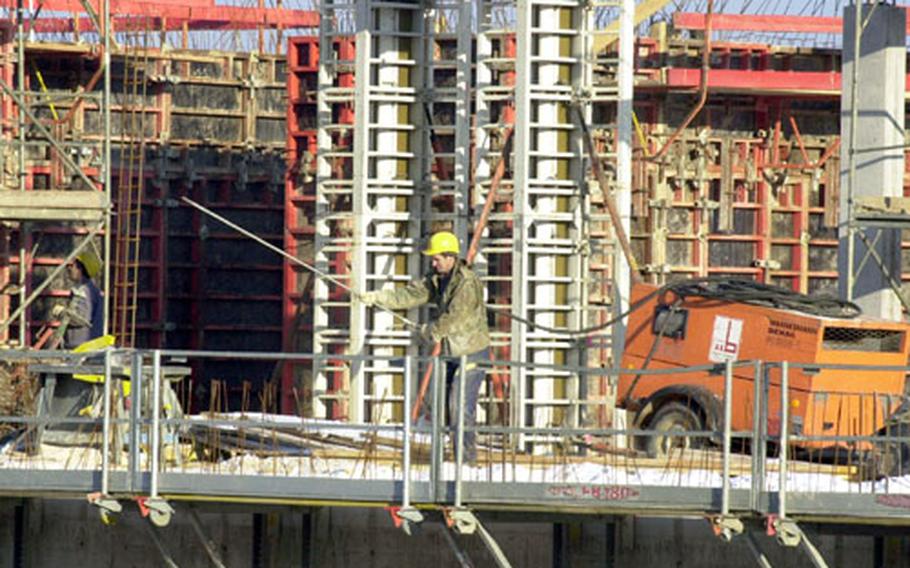 Builders work on the second story of the new elementary school at the Netzaberg housing area under construction in Eschensbach, Germany. (Seth Robson / S&S)

GRAFENW&#214;HR, Germany &#8212; Military families will be moving into 830 new housing units being built by the Danish firm Nordica over the next 2&#189; years, according to the Installation Management Agency-Europe.

The project is part of a $600 million expansion of the Grafenw&#246;hr training area that will see the base grow from a 1,000-soldier garrison with 2,000 military family members to a brigade-size facility with 4,500 active-duty soldiers and 7,000 family members.

The expansion involves building 1,600 homes for soldiers and their families. About half of the homes will be in a new off-post community &#8212; Netzaberg &#8212; with its own road leading directly to the military base. The rest of the new homes will be scattered throughout German communities near Grafenw&#246;hr, Efficient Basing Grafenw&#246;hr spokeswoman Susanne Bartsch said Tuesday.

The houses will be constructed under a build-to-lease program, which will see the Army lease back the completed homes. The total cost of leasing all 1,600 homes to be built around Grafenw&#246;hr will be $20 million annually, officials said.

Construction on the Netzaberg houses will start this summer, Bartsch said.

The Army has already started building a town center for Netzaberg that, according to the U.S. Army Corps of Engineers, Europe District, will include $43 million worth of utilities, elementary and middle schools ($35 million), a child development and youth center ($15 million), a community center, shoppette, gas station and chapel.

On Monday, builders were hard at work at the snow-covered site where foundations have been poured for many of the new buildings, and the second story of the elementary school is rising atop a small hill overlooking rolling German farmland and pine forest.

The land where Netzaberg is cited is part of Grafenw&#246;hr training area now, but once the houses are built it will become part of the nearby German city of Eschenbach, Bartsch said. Eschenbach Mayor Robert Dotzauer said only members of the U.S. military and their families will be able to live at Netzaberg.

There have been good relations between local Germans and Americans for more than 60 years, and the increased U.S. presence at Grafenw&#246;hr is not a problem for locals, Dotzauer said.

&#8220;The construction of a new neighborhood will surely be appreciated by the new residents. The residents will be well provided for with their own social infrastructure within the military construction area. So the city is not expecting any additional impact,&#8221; Dotzauer said.

The Netzaberg construction will see Eschenbach receive extra German federal and property tax dollars, and local businesses could see an increase in American shoppers. However, Dotzauer said he expected most of the new residents to shop at tax-free facilities on post.